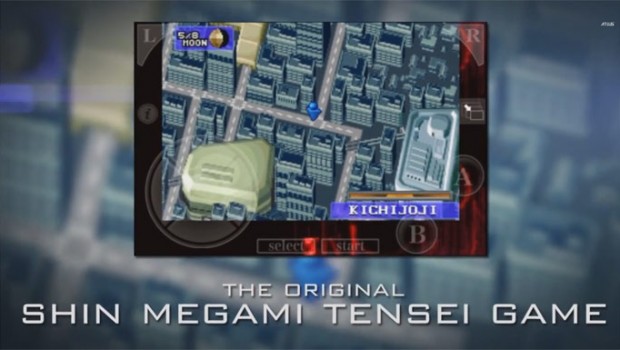 IRVINE, Calif. – March 18, 2014 – Delve deeper into the world behind the Shin Megami Tensei universe with the game that started it all. Localized into English for the first time in history, Shin Megami Tensei explores the iconic struggle between Law and Chaos with over 40 hours of dungeon-crawling, role-playing action. The game, which regularly costs $7.99, is on sale for $5.99 through March 31.

Everything little thing matters: Character choices play a major role in SMT. Not only do they affect the outcome of the game’s ending, but also critical gameplay elements along the way — from the facilities players can access to the equipment they can use — even limiting the demons that are recruitable.

Fuse at your own risk: With two alignment scales to deal with, Law vs. Chaos and Light vs. Dark, micromanaging teams of demon soldiers becomes an addicting challenge.

A bit longer than a bathroom break: Shin Megami Tensei is the full-fledged version of the role-playing game, meaning it’s 40-60 hours’ worth of dungeon crawling in your pocket, everywhere you go.

The first of its kind: Unless you were prescient enough to import the title from Japan and proficient enough in the language to understand the nuances of the intricate story, this is the first time the story of Shin Megami Tensei is being told in North America.

Step away from clear notions of good and evil, right and wrong. There are demons in the world, but whether they are ally or enemy depends on player actions. In Tokyo 199X, a mysterious murder leads to the emergence of demons and an escalating global conflict thanks to the rise of a charismatic rebel leader in possession of a demon army, and external forces that wish to crush such threats with extreme measures. As the protagonist, players have an unusual ability (via computer program) to communicate with and recruit demons to fight for them. As they collect demons, the program will allow you to store, summon, and fuse them to create the right team to negotiate the ever-changing balance of powers, and fight for the kind of world you ultimately wish to live in.

Shin Megami Tensei is now available exclusively on the App Store at the discounted price of $5.99 through March 31. Beginning April 1, the game will revert to its original $7.99 price.  Recommended iOS devices are: iPhone 4, iPhone 4S, iPod Touch (4th gen or later) and iPad. iOS 4.3 is required. Polish your demonic communication skills and get ready for the negotiations of a lifetime.