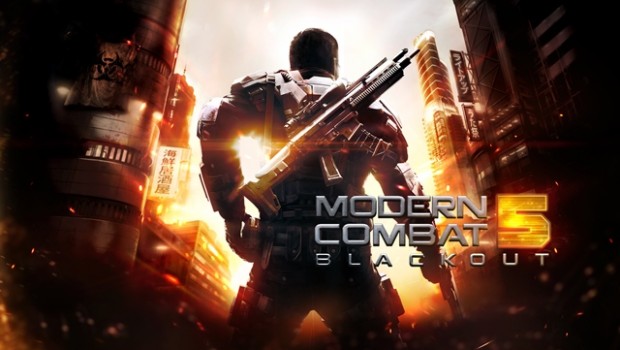 MODERN COMBAT 5: BLACKOUT IS OUT NOW ON SMARTPHONES & TABLETS

July 24th 2014 – The ultimate first-person-shooter series on smartphones and tablets is out now, setting a new benchmark for the FPS genre on mobile devices. Modern Combat 5: Blackout is available to download now from the App Store, Google Play, Windows Stores.

The story begins in Venice as protagonist Phoenix is sent on a special operation to secure WMDs from a well-armed terrorist group. Through the course of the action, the plot then switches to Tokyo where Phoenix has to fight amidst total anarchy while trying to convince his allies to accept an uncomfortable secret. Navigate beautiful settings from both cities for an action-packed, thrilling ride.

Form squads with friends or other players and compete globally to test your individual and team skills in high powered 6 VS 6 multiplayer squad matches. Communicate with other players to plan your strategy using global and squad chat and call in military support using multiplayer military support packages each with cool abilities to bring waste to the battlefield.
If you’re looking for some alone time, the single player campaign features engaging, fast paced story missions and all new Spec-Ops missions. The Spec-Ops missions are short, fun and objective-driven: cover your allies, clear the room, eliminate the target, and much more. Single player campaign also introduces sniper bullet control, scanning drone, and revive.
Real-time shadows, ragdoll physics, Screen Space Ambient Occlusion (SSAO), soft particles and spherical harmonics are just some of the visual effects that make Modern Combat 5: Blackout a must-have for FPS fans this winter.
Modern Combat 5: Blackout is out now and available to download from the App Store, Google Play and Windows Stores.