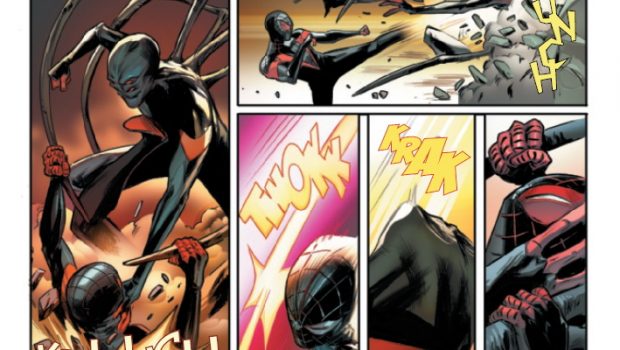 Summary: Worth it if you are a fan of this version of Spider Man.

Miles Morales finally trashes the lab of the evil scientist who created clones of him only to be captured by those same clones and their leader heads off to cause him pain by hurting those closest to him. Can Miles get to him in time?

As I have mentioned in the past, Spider Man has a lot of alternate universe stories including pigs, Noir, Spider-Gwen and more reboots than any other series. People who complained the movies get rebooted too much never read any of the comics or know how many different versions of the same character there are.

Miles Morales is one of the more popular characters that came out of the Into the Spiderverse movie and it would make sense for Marvel to do a reprint of this series. The characters are different so there is no Gwen Stacy or Aunt May in this version but there is still an uncle who did die.

Spider Man has always had a lot more moral complexity to it than other superhero stories even if it is laid on a bit thick at times. The bad guys are upset at the hero in this case as they are trying to survive themselves.

This one would be recommended if you are a fan of this character and want to see more of his story. It is pretty far into the series so maybe if you have been following this one already you would get more into it.