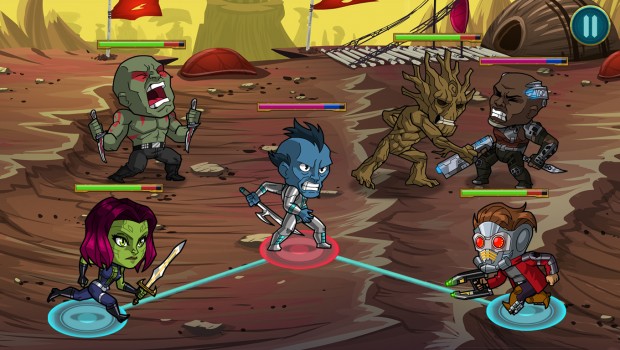 Marvel Launches “Guardians of the Galaxy: The Universal Weapon,” the Official Mobile Game Inspired by the Film

Players will initially take on the role of Star-Lord as he rallies his rag-tag crew—Rocket, a gun-toting raccoon with a quick draw and an even quicker temper; Groot, the tree-like humanoid who packs a punch; the deadly and enigmatic assassin, Gamora; and the revenge-driven Drax the Destroyer through galactic locations and real-time strategic combat. Marvel fans will recruit and train additional heroes, engage in gesture-based team combat, and unlock each piece of the story to unveil the identity of the Guardians’ shadowy nemesis.

In Guardians of the Galaxy: The Universal Weapon players will be able to:

·      Go head to head with a roster of villains like Korath, Nebula, and Ronan

About Marvel’s Guardians of the Galaxy – In Cinemas August 7