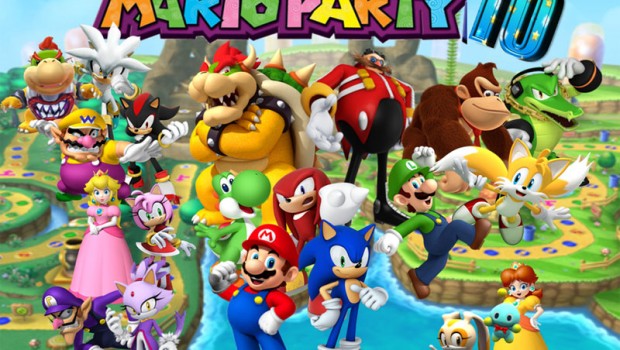 Summary: Mario Party 10 on the Wii U adds HD graphics, Bowser and the use of the GamePad for some classic Nintendo fun!

Available on the Nintendo Wii U as either the game itself or in a limited Mario Party 10 + Super Mario amiibo Bundle (reviewed), those lovable characters from the Nintendo Universe have returned as it offers gamers a whole collection of new mini-games for that true party experience. Sure, we’ve seen this all before but Nintendo have added a slick coat of HD graphics and up to five players as they embark on some truly wild and crazy gaming which really brings your family and friends together.

In essence, Mario Party 10 is basically a fun and interactive version of those classic boardgames of yesteryear but with the Nintendo flare! So like a real board game, you need to roll the dice and then let your character move through the various squares that they land on while playing mini-games along the way. The person who collects the most stars basically wins.

For gameplay modes, there are three modes that include Mario Party, Bowser Party and amiibo Party. Mario Party allows up to 4-players as they engage in this virtual boardgame which is very similar to Mario Party 9. The Bowser Party Mode on the other hand allows for five players with one player controlling the dragon and lastly, amiibo mode basically uses real-world figures to determine the Mario Party experience. 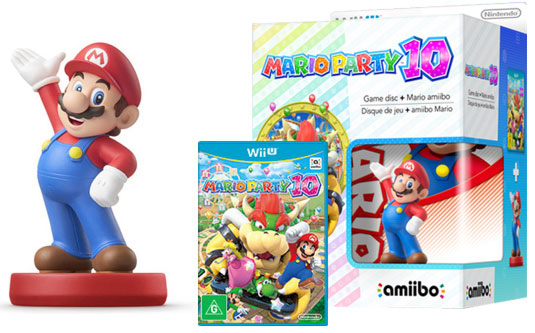 So what’s a amiibo? It’s basically an action figure that can interact with a video game that is of a similar premise to Disney’s Toy Story or Activision’s Syklanders. Currently (March 2015) over 5.7 million amiibo’s have been sold that include characters such as Mario, Bowser, Megaman, Princess Peach and Zelda to name a few. Amiibo’s are also quite detailed and when not in use, they make the perfect addition to your bookcase or desk.

With that said and unlike Toy Story or Skylanders, amiibo’s don’t require a portal, they are automatically compatible with the Wii U GamePad and the new Nintendo 3DS and 3DS XL by just tapping them onto the console which is another cool feature. When you use the amiibo’s in the game, the board changes to the theme of the character which even has special pieces for these characters and definitely spices up the gameplay. 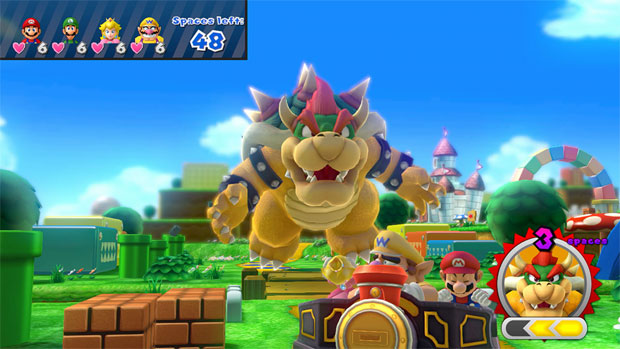 Another new additional to the franchise is the inclusion of Bowser who is now a playable character and once this crazy dragon crashes the Mario Party, it’s up to the other players to challenge this loveable villain with up to five players in Bowser’s Party Mode. Also, like previous Mario Party instalments, gamers must use the Wii Remotes to control the games (up to four players) or they can use the GamePad to control the scheming Bowser.

Like previous incarnations, there is a central gaming board that must be navigated by the players as they roll dice, collect stars and engage in a variety of fun and sometimes mediocre mini-games. However if you played this title alone, it would be quite boring but with the inclusion of up to 5 players, the whole game takes on a new personality. With that said, developers Nd Cube have included over 70 mini-games and some really fun power-ups to be found along the way. 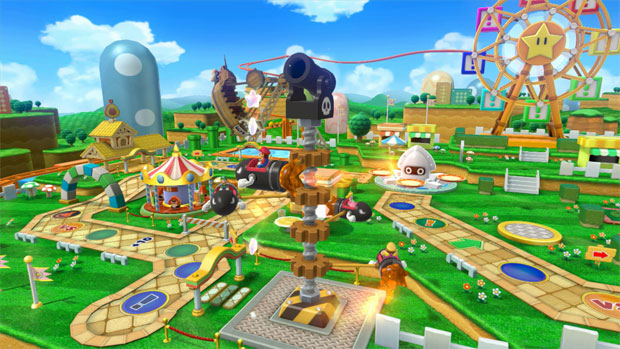 My favourite element of this game is the Bowser Party Mode which allows one player to control Bowser while the other four players as “Team Mario” who must challenge this cartoon villain, not to mention some great cooperative boss battles. In this mode, the person controlling Bowser uses the Gamepad to launch havoc against the other players as they try to eliminate them from various mini-games.It’s also fun to use the gyro aspect of the GamePad and the microphone which requires players to blow on the microphone so that Bowser can unleash fireballs.

However nothing is more fun than using Bowser’s fire breathing abilities to hamper the other players or engaging in the amazing giant hamster wheel which is very fun and quite surreal as he spins it around furiously. Also, being Bowser with the Gamepad is like being some naughty Dungeon Master as you can control more elements on the board which makes for some wickedly entertaining fun, especially setting traps for players. So yeah, we’ve seen some of this before but not in glorious HD graphics that really makes this quite a slick looking game. 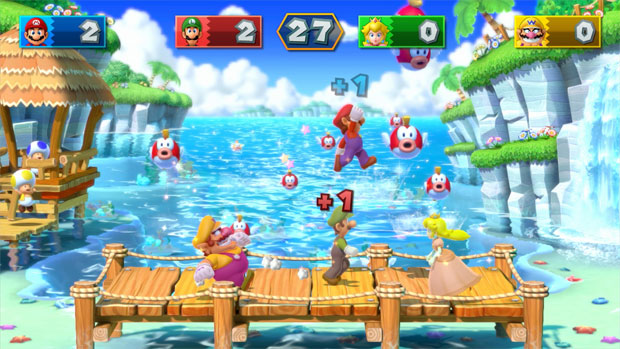 Graphically Mario Party 10 is a good looking game on the Nintendo Wii U, especially with the inclusion of HD graphics and although it still looks quite cartoon-like in its presentation, it’s oozing with lots of Nintendo references and the colours looking amazing on a Full HD TV that are almost exploding out of your TV set. With that said, the Mushroom Kingdom has never looked better! Audio is equally as good, especially the catchy music that has made so many Nintendo games a joy to play, not to mention the whacky sound effects.

Mario Party 10 is a game that needs to be played with friends and family which is far superior than the AI. The gameplay is very reminiscent of previous Mario Party games but there are a few twists and turns from Nintendo such as the inclusion of the amiibo and full HD graphics that does give the franchise a fresh coat of paint. Sure, it’s not the most original game but for the younger gamer or a group of friends, it’s still a fun experience, especially with all the Nintendo paraphernalia. With that said, we did take a few points off for originality and hopefully Nintendo can really wow us with Mario Party 11! 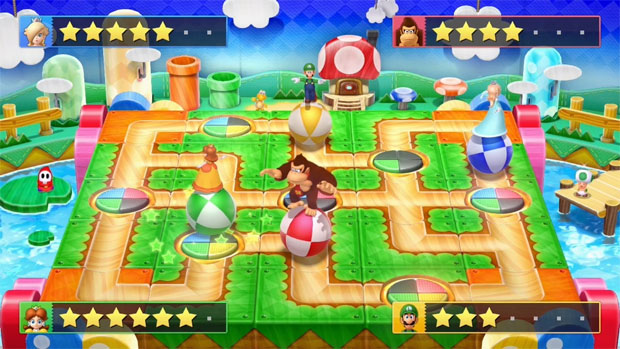 • Grab the GamePad and play as Bowser for the first time in the series. In Bowser Party mini-games, one player gets to be the fire-breathing Bowser as he tries to burn, bonk or blast other players away. Up to four players use Wii Remote controllers to cooperate and survive as they confront the Bowser player, who is using the Wii U GamePad. It’s four against one, and being a party pooper has never been so much fun!

• Control Bowser in a variety of ways with the Wii U GamePad. In Bowser’s Bad Breath, for example, the Bowser player moves the GamePad around to aim and shoot fireballs at the other players while they attempt to dodge them.

• Colors and textures pop off the screen as the Mario Party series leaps into high definition for the first time.

• Enjoy new mini-games in classic Mario Party style with up to four players.