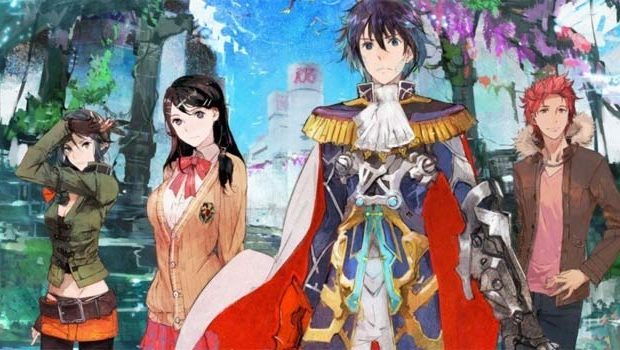 Summary: A melodic and stylish JRPG catering to those who love anime, Japanese culture and J-Pop, but might not entirely appeal to Shin Megami Tensei or Fire Emblem fans.

Tokyo Mirage Sessions #FE is a cross-over role-playing video game combining two of Atlus and Nintendo’s most popular franchises – Shin Megami Tensei and Fire Emblem. As a fan of both game properties, this is about as simple as I can summarise the game sitting in my Wii U. For better or worse, it is unlike anything I’ve ever seen before in either series – and it might not entirely resonate with either crowd. But for this reviewer, I couldn’t help but fall for its charms. 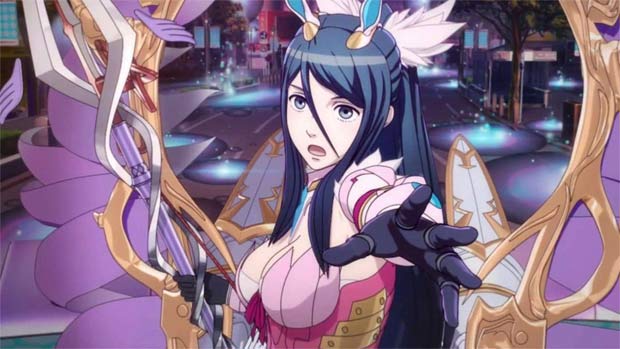 You would be forgiven for experiencing confusion when you first delve into Tokyo Mirage Sessions #FE’s choice of setting. Unlike Shin Megami Tensei and Fire Emblem, there are no dark underworlds or warring medieval kingdoms in sight. No brooding and jaded anti-heroes or heroic knights and lords either. Instead, modern-today Tokyo, the Japanese entertainment industry and plucky young teenage pop idols take their place in a more more light-hearted, less serious tale.

The story is also entirely presented in Japanese audio with English subtitles. This is great for purists but perhaps a little saddening for fans who love the excellent English casting we’ve come to expect from Atlus and Nintendo. Thankfully the localisation in TMS #FE is top-notch and the Japanese voice-overs make sense given the focus on the idol scene. The opening moments introduce an intriguing mystery presented in a stellar anime cutscene. Five years prior to the game’s beginning, a young thirteen year-old girl witnesses her opera singer older sister and an entire audience vanish into thin air, leaving her the sole survivor and forever traumatised by the event. Now eighteen years young, Tsubasa Oribe heads to the One of Millennium talent audition event where she wishes to begin her career as an idol and move on from the trauma. 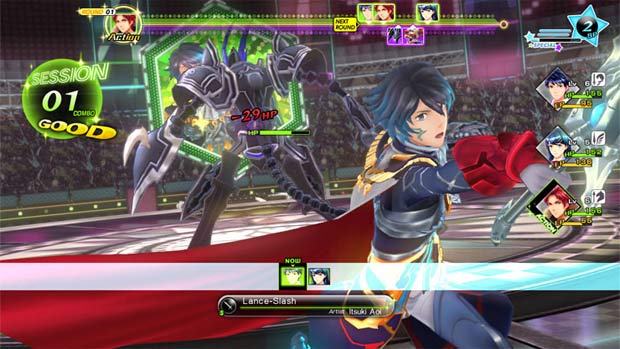 Unfortunately, things do devolve into JRPG tropes quickly, but push on and you’ll find a very hard-to-not like cast of characters and story hook. Protagonist Itsuki Aoi is the likable best-friend who rushes to save the day as the event is predictably revealed as a trap. Tsubasa and other idol hopefuls are taken by Mirages evil beings from an otherworldly dimension called the Idolsphere who are behind the disappearances in the real world. Mirages harvest energy from idols and other humans called Performa, a person’s creative energy and drive which makes them unique. Itsuki miraculously saves the day by awakening his own Performa and uses it to merge with a Mirage. Some of the both Mirages turn out to be fan-favourite characters from the Fire Emblem series, but only from select games such as Chrom, Tiki, Tharja, and Virion from Awakening and Cain and Caeda from Shadow Dragon and the Blade of Light.

From here the story becomes a light-hearted and fun, if very predictable journey. Itsuki, Tsubasa and company join Fortuna Entertainment as Mirage Masters and to help stop future Mirage attacks against performers. This is achieved through a series of main story missions, while side-quests involve the cast furthering their own idol careers, exploring famous districts like Harajuku and Shibuya in between dungeons, and interacting in-between major story beats.

The main cast are all very likeable despite some one-dimensional qualities; Itsuki is the ultimate good guy just wanting to help his friends become idols and protect them from evil Mirages, Tsubasa is the sickeningly sweet but charming idol-to-be, Touma Akagi is their impulsive but hilarious friend (remind you of Youske, anyone?) and Eleonora Yumizuru is the half-white, half-Japanese actress wanting to make it big over in Hollywood. The Wii U’s second-screen on the GamePad is used to great effect to expand your connection with the cast, with all of them texting each other in an iPhone-esque messaging system, using it to further the story (and show dungeon maps and stat screens) and inject some more personality into your party members.

Despite the perplexing choice of setting and shift to light-hearted story-telling, the idol culture is a fascinating slice of the country rarely explored as thoroughly in video games. I was willing to push on from the strength of the presentation alone; everything from the user interface to the soundtrack to the anime cutscenes and garish, outlandish character and monster designs were as amazing as you can expect from Atlus. Weirdly enough, the game’s stylistic flair and upbeat tone more closely resembles the SMT spin-off series Persona, but it’s the turn-based combat system which is still FE and SMT-flavoured. While exploring Idolspheres (the game’s version of dungeons) and collecting items, navigating traps and completing storyline objectives, you will encounter hostile Mirages in the field. Making contact will trigger combat, but striking first on-field can help you avoid combat or guarantee pre-emptive damage.

Entering battle in Tokyo Mirage Sessions #FE involves managing a party of three in a turn-based timeline of events dictating who acts when, and you can swap members in-and-out (aside from Itsuki) for further tactical control. Each party member has a variety of attacks, items and skills to use against enemies, with influences from both the Elements and Weapon triangle systems from both SMT and Fire Emblem present. Essentially, every character and enemy has a weakness to certain weapons or elements depending on their equipment and it’s up to the player to exploit and protect against them; one such way is the Session System. Using certain attacks which enemies are weak to but have affinity with party members can trigger Sessions, which boil down to free follow-up attacks from your allies.

The nuance of combat takes some time to reveal itself, but things really do get genuinely challenging and fun once other mechanics like Performance Attacks kick in. Building your SP meter can lead to Duo Attacks where your character’s Mirage performs their own devastating abilities, or Dual Attacks which can be used to extend the combo of your session triggers. The fact enemies can also perform session attacks and gang up on you, and many can attack twice in a turn calls for careful management of your healers and attackers as well as making sure you trigger enough specials to survive the tougher boss fights.

Then there’s the rewards from gaining XP and loot, like Star Rankings or Radiant Skills for your party members to unlock new abilities and sidequests, and Carnages, powerful transformable upgrades for your Mirage’s weapons gained by crafting materials with Performa and looted from enemies (yes, the grind is still real). Level your Mirage’s Carnage and you can unlock various Command, Session and Passive skills to use against foes, like new spells, attacks, buffs, debuffs, heals and lingering effects. If you were worried about a streamlined turn-based battle system, put your fears at rest.

The audio and visuals of Tokyo Mirage Sessions #FE is spectacular. The art-style is colourful, well presented and slick, with the UI just one-step behind the style seen from the upcoming Persona 5. The character and Mirage designs are also great, with the Fire Emblem characters and the incredibly creepy boss enemies a particular highlight. Fans of Japanese culture will love the anime cutscenes (played in key story moments) and idol songs – even I found them catchy as a non-fan (but now convert). 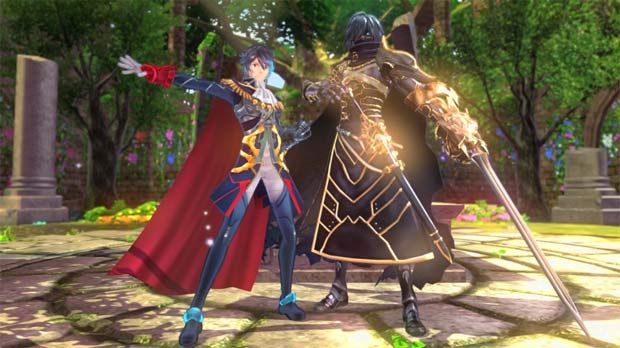 It’s only the little things that drag the game down somewhat. Dungeon exploration can tend to be fairly repetitive, as can combat encounters if you strive to defeat every single enemy on the field and go through the same motions over and over (most standard attack animations play out the same with minimal flair to keep things exciting). Characters also repeat battle lines to the point of absurdity and it does grate the ears (even if you can’t understand Japanese), but these are all well-known quirks to hardcore JRPG players who love the grind. My own gripe was the lack of Fire Emblem influence compared to Shin Megami Tensei, but it’s to be expected given Atlus handled development with much smaller input from Nintendo’s Intelligent Systems. 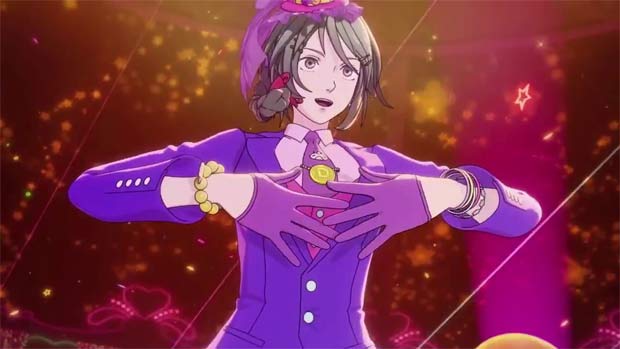 If you’re a newcomer or casual, turn the difficulty down and avoid most fights to best experience the stronger parts of the game quicker – the story, the character development and the infectious style. Also be prepared for a ton of content (40+ hours), and the developers should be commended for the effort they put into side quests and the additional rewards (an secret post-credit scene) for finishing them all. 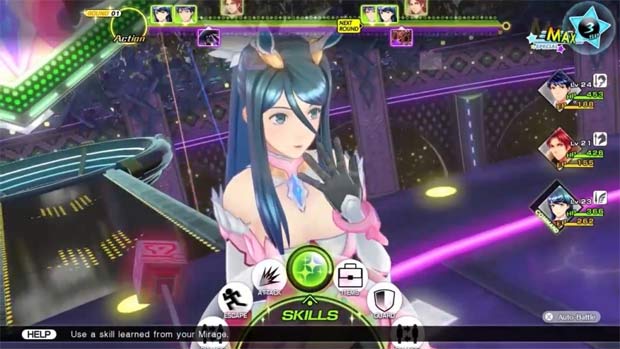 For fans of SMT and FE, you will need to put aside a ton of expectations from both series to enjoy this infectiously upbeat game. For most lovers of Japanese culture, it will keep you hooked to the end to see how this very random, very unexpected cross-over forges its own path forward. It doesn’t stray too far away from traditional JRPG mechanics but that’s okay when the combat systems are solid, the characters are charming and well-developed and the art-style and music is just oozing style.

It’s colourful, melodic and puts on a good show for those enamored with Japanese idol pop culture and unconventional JRPG story-telling –Tokyo Mirage Sessions #FE is a must-have or must-try for Wii U owners who love a great JRPG and are starved for new exclusive experiences in 2016. 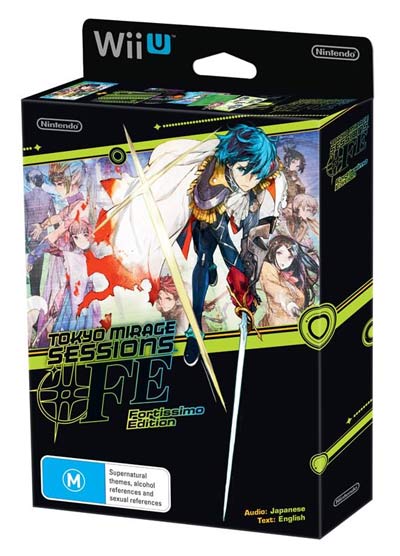