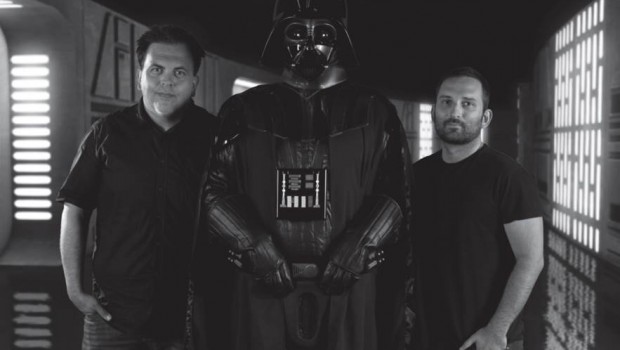 David Prowse, the actor who played Darth Vader for the first Star Wars Trilogy, never revealed his face during the films. He could have done it only once in “Return of the Jedi”, but something happened. Another actor did that sequence and that fact marked David Prowse’s life for ever. Thirty years later, two young filmmakers discovered why Lucasfilm producers took that decision, and were determined to pay Dave a deserved tribute. The film, I AM YOUR FATHER tells the real story behind the man, the myth and the character – Darth Vader. Shock Entertainment is thrilled to be releasing I AM YOUR FATHER locally in Australia for the very first time on DVD on April 6.

Darth Vader is well established as one of the most outstanding villains in film history. His tall physique, long cape, the breathing and helmet are all instantly recognised worldwide. The one missing thing is the man behind the mask, David Prowse.

80 years old now, David lives anonymously in Croydon, a suburb of London. He apparently has a simple life, but unlike his neighbours, David hides one of the most incredible stories that can ever be told.

Our story begins when a young filmmaker travels to London to propose that David Prowse reshoot a sequence from the legendary trilogy. A sequence he couldn’t shoot thirty years earlier and which deprived him from being as well known as the other leading members of the cast, such as Harrison Ford, Carrie Fisher or Mark Hamill. The goal is to repair an injustice for the thousands of fans who believe that David Prowse should have played Darth Vader in that particular scene. In a symbolic way, the director, assisted by a group of enthusiastic fans, will try to give Prowse back the recognition he never had.

In this documentary, the directors will find some clues about the difficult relationship between David Prowse and Lucasfilm.

Apparently, the reason of for their differences was an article published by a British newspaper during the shooting of “The return of the Jedi”. Was the article the only reason why David Prowse has been ostracised all these years?

It’s time to find the truth about this, as we try to convince David Prowse to play, one the last time, the most well known villain of all time.
DIRECTOR’S NOTE:

We are the “Star Wars Generation”, it’s a fact. All of us who were born during the 70s saw the first trilogy of the galactic saga as children. It was inevitable that we became devoted fans of one of the most influential popular culture films of all time some of those fans, among which we find ourselves, went even further, because those films opened our eyes beyond the imaginable. We went into the darkness (dark side) from behind a camera. Star Wars was the source of inspiration for a generation of filmmakers who wanted to start telling stories through the lens of a movie camera.

One day, two of these filmmakers, decided to join forces to tell the story of a stranger. A man who played one of the most iconic and recognisable villains of all time in film , but in the most absolute anonymity. That man is David Prowse, the actor who played the mythical and unique Darth Vader. Our interest is to know and learn from the man behind the mask with permission from George Lucas himself.

The story of David Prowse goes far beyond a simple collection of stories about his experiences on the set of Star Wars. It is an adventure with many lights and shadows about a simple man who suddenly was overwhelmed by the transcendence of a character that had such global success. We found, like Vader, his imposing presence hides a succession of events that he was unable to control. We believe that life has offered us the opportunity to recover David Prowse’s glory, honour and legacy. The man, the myth and the character. Ironically, the same kids who once feared Darth Vader, now will try to humanise him through this documentary.

I AM YOUR FATHER is available for the first time on DVD in Australia through Shock Entertainment on April 6.