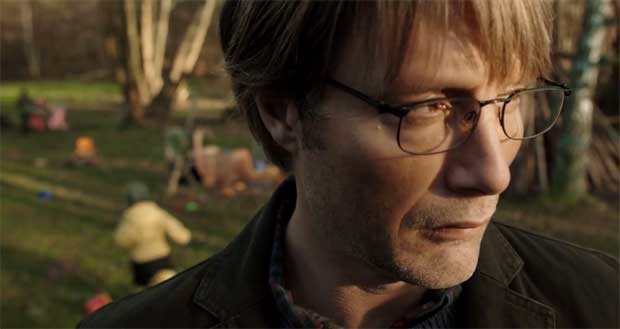 Summary: If you’ve got the stomach for it, and if you can find the right frame of mind, this film will give you something valuable - even if it doesn’t feel entirely pleasant at the time.

The Hunt is devastating, magnificent, excruciating, and outstanding.

Set in a small town in Denmark, the film tells the story of a male kindergarten worker (Mads Mikkelsen) accused of sexually interfering with a pupil. The accusation quickly gains a life of its own. It’s a perfect storm: five-year-olds are suggestible, a tendency unwittingly exploited by obtuse law enforcement and well-meaning educators, and the tight-knit community is in no danger of underreacting.

That synopsis alone should indicate that the film is an arduous emotional gauntlet. However, there’s nothing cheap, exploitative or gratuitous about the torment it will visit on you. The film is painful, but not sadistic. It’s distressing, but not punitive. You will sympathise with the protagonist, you will empathise with the panicked community, and you will dread more or less every single plot development. But not once will you feel disrespected. 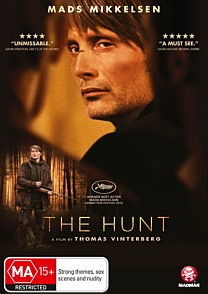 Indeed, it’s difficult to feel unfairly manipulated by a film with such carefully drawn and expertly performed characters. Particular mention must be made of Annika Wedderkopp, the (very) young actress who plays Klara; it’s an incredibly natural and convincing performance. The characters are such that none of the agony-dealers are purely, inexplicably evil, and none of the agony-receivers are idealised Mary Sues. The events wreak havoc on the lives of everyone involved, but only in ways that make sense – which is to say that the protective, vigilante motivations of the hysterical townspeople (who see it as their role to ostracise and torment the accused) are realistic – not that those motivations are fair or reasonable.

The film’s integrity is also bolstered by a plot in which all the pain actually means something. None of the distressing narrative moments seem to have been calculated deliberately to harrow the audience. Rather, there are genuine and worthwhile issues and themes at the heart of this film: the raw power of moral hysteria and panic, the naivete and suggestibility of children, competitive loyalties among friends and family, the self-destructive urge that ostracism inflicts on the ostracised, and the difficulty in achieving, feeling or recognising proper redemption (both in ourselves and in others).

If this review reads like a defence of the film, that’s because it’s so easy to imagine how it might repel or offend potential and actual viewers. I struggled with it myself, and certainly didn’t emerge without letting out a despairing sob or two. Ultimately, though, it’s a film that is worth the time of anyone who deals with, hears about, or has an opinion on the myriad issues that it surveys (i.e. pretty much everyone). If you’ve got the stomach for it, and if you can find the right frame of mind, this film will give you something valuable – even if it doesn’t feel entirely pleasant at the time.