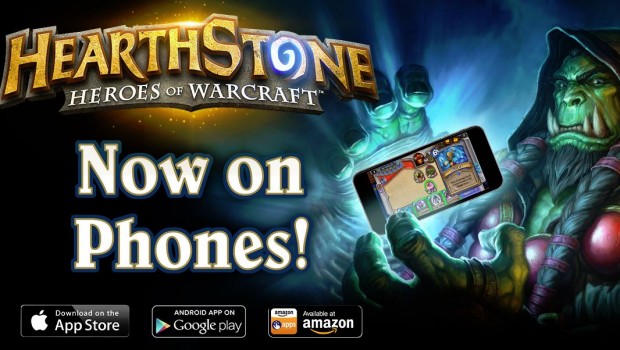 SYDNEY, Australia—April 15, 2015—Calling all mobile duellists, it’s time to take your decks on the go—Hearthstone®: Heroes of Warcraft™ is now playable on iOS® and Android™ mobile phones. This version features an all-new interface specially crafted for smaller screens, making it easier than ever to keep the fun of Hearthstone at your fingertips.

“We’re excited to welcome mobile gamers to the Hearthstone community,” said Mike Morhaime, CEO and cofounder of Blizzard Entertainment. “Hearthstone’s quick, super-accessible gameplay is perfect for gaming on the go, and with the mobile versions it’s incredibly easy to jump into a match and have some fun.”

Hearthstone: Heroes of Warcraft is a fast-paced, easy-to-learn digital card game for players of every skill level. Hearthstone offers a wide variety of ways to play, whether you want to prove your prowess in ranked matches, test your chops as a deck-builder in the Arena, battle crafty A.I. opponents to win new cards in the Solo Adventures, or challenge your friends to a duel.

The mobile version of Hearthstone brings all of the exciting features and content available in the Windows®, Mac®, and tablet versions of the game, including Goblins vs Gnomes™, Curse of Naxxramas™, and the newly released Blackrock Mountain™. As with the other versions of the game, players will have full access to their existing card collection when they log in to the game on their mobile phones.

Visit playhearthstone.com to learn more about Hearthstone, then head to the Google Play™ store or Amazon Appstore for Android, or Apple® App Store™ for iOS, to download the game for free and start duelling!