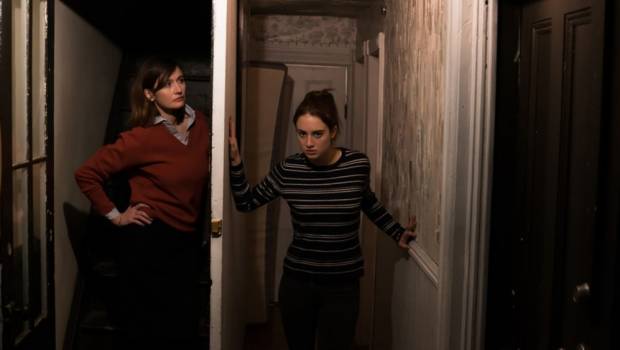 Summary: This handsome film tries too hard to be hip and cool. Instead, it’s a meandering, observational piece about an unlikeable character.

“Good Posture” is a film about a New York City lodger who is pretty vacant. A 20-something slacker finds herself lodging with family friends in beautiful Brooklyn after her relationship breaks down. The result is a film that is as aimless as its unlikeable protagonist.

This comedy is the directorial debut for Dolly Wells (“Bridget Jones’s Diary”) who works with her friend and fellow actress, Emily Mortimer on the TV show, “Doll & Em.” The latter also stars in “Good Posture” as an acclaimed but media-shy author named Julia Price. It is possible that some of the people involved in this project were a little too close to the proceedings to be truly objective. This is an observational piece, but so often it seems so pointless.

Grace Van Patten puts in an excellent performance as the film’s anti-star, Lilian. She’s a privileged white girl who has an acrimonious relationship with her jet-setting father. She has no siblings and her mother has passed away, so the only people left to care for her are Price and her musician husband (Ebon Moss-Bachrach).

The two women in this film have a challenging relationship. They write each other passive-aggressive notes in Lillian’s journal. Lillian also decides to make an unauthorised documentary film about Price, even though she hasn’t read the author’s books. Lillian also enlists a hipster cameraman Sol (John Early) for the ride and often seeks out the advice of a strange, dog walker (Timm Sharp).

While the film has a slow, meandering quality, the soundtrack has some energetic, indie sounds. The story is a gentle one that sees the ungracious houseguest come of age and mature into an adult by the end. There are cameos from authors like Zadie Smith and Martin Amis who are interviewed for the mock documentary.

“Good Posture” is a film that doesn’t really offer anything fresh. The idea of an odd couple being forced to live in close proximity is hardly new. The rendering is quite uneven because this film has such a cool exterior, and this means that there are few moments left for warmth or learning. There are some handsome moments, like the gorgeous New York suburbs and landscape. You can’t dismiss “Good Posture” for being a purely ugly affair, unless you focus on the lead character because she is anything but “good.”