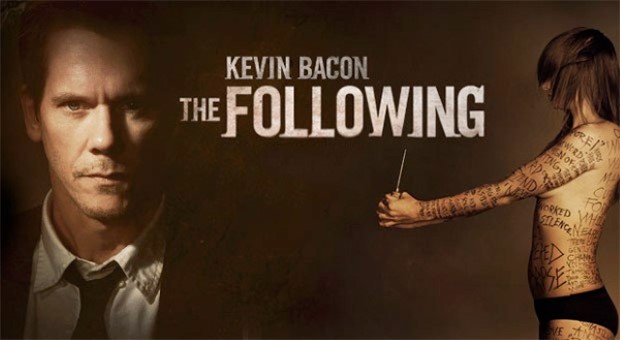 Summary: Big, dumb fun with a killer cast, some of the most visceral slayings ever seen on prime time television and the potential to turn the central conceit of the series, that of the cult, into something rather special.

The Following is the latest television series effort from Kevin Williamson, best known for his work on the Scream franchise as well as The Vampire Diaries and, erm, Dawson’s Creek. Starring Kevin Bacon in his first outing on the small screen and ably supported by an ensemble cast featuring James Purefoy, Shawn Ashmore, Natalie Zea and Annie Parisse, The Following concerns former FBI agent Ryan Hardy (Bacon) finding himself unwillingly pulled back into service as a consultant when serial killer Joe Carroll (Purefoy), Hardy’s last and most notorious arrest, escapes from custody, leaving a trail of bodies behind him. 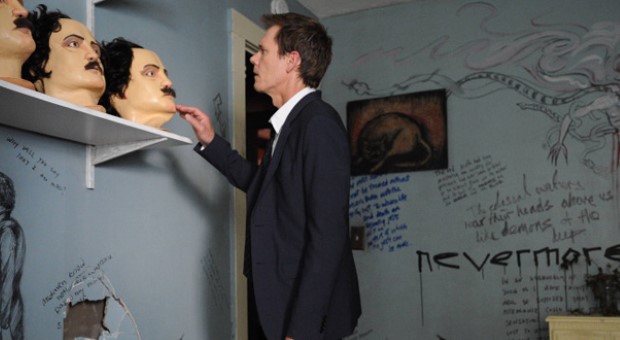 Ten years earlier Hardy had caught charismatic literature teacher Carroll in the act of attacking two students, a confrontation that nearly ended his own life and left him reliant on a pacemaker after suffering ventricular damage at the end of Carroll’s blade. Retiring from the force and living on residuals from a tell-all book about his experience, Hardy is called back into action at Carroll’s behest; prior to being revealed as a Poe obsessed murderer whose preferred method of murder was enucleation (Removal of the eyes), Carroll was a family man whose sole attempt to break into the writing industry, a novel called “The Lighthouse” was critically lambasted as being poorly written and derivative. Now that he’s escaped from prison Carroll wants to write a sequel… And Ryan Hardy is to be the protagonist.

Using the resources and blind devotion of a cult of followers amassed during his time in prison, Carroll plans to play out the scenarios planned in his manuscript and transcribe what happens accordingly; Hardy is pegged as the main motivation behind Carroll’s malevolent scheming for two reasons: He was the man who finally captured him and put an end to his killing spree, and he had the audacity to shack up with Carroll’s wife Claire after he was incarcerated, creating a tangible tension in the relationship of all three and fuelling the fires of Carroll’s revenge plot.

What follows is an often unevenly written game of Cat and Mouse between Carroll’s cult of serial killer’s and the efforts of Hardy and the increasingly inept FBI. By far the most interesting aspect of the series is the idea of a fanatical cult of murderers infiltrating society and acting out the whim of a madman, yet this concept is never fully realised. It’s never clear exactly why Carroll has this power over the myriad of deranged followers, nor is his philosophy really expanded upon beyond “Poe is Great, to kill is to live”. Sure, he’s charismatic and well read, but is that really enough to convince hundreds of people to kill in your name? 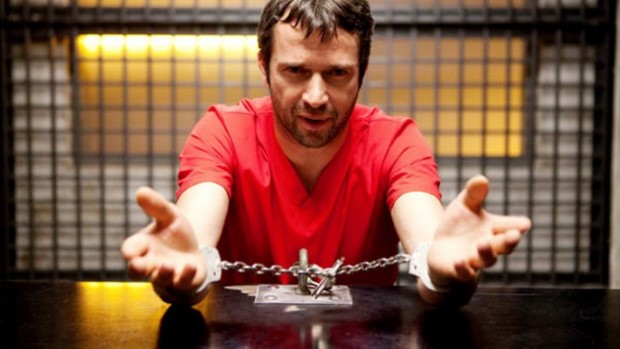 The Following is also hampered by its serialised format that, despite the occasional flashes of brilliance, relies too much on padding out the story to prolong the running time and falls into the trap of predictability much too early in the proceedings. The basic format of each episode has Hardy and his team get one step closer to locating Carroll and, alternately, his child or Ex-Wife currently being held hostage, before the inevitable confrontation that leads to an escape by the villains via the dues ex machina of the interference of some heretofore unknown member of the cult.

Another major issue with the show is the development of certain characters; although both Bacon and Purefoy do well with the material on hand, and Zea, Ashmore and Parisse have their moment to shine in some of the late episodes, the members of the cult aren’t as well written for the most part, with the sycophantic Emma (Valorie Curry) and her character arc of moving from one love triangle to another grating in particular. The one major exception is Roderick (Warren Kole), an intriguing character who has handled most of the recruiting and organisation of the cult’s activities behind the scenes and eventually serves to derail Carroll’s grand plan somewhat after their antagonistic relationship explodes; conflicted between his loyalty to Carroll’s cause and his own hubris, Roderick slowly reveals himself as having far greater aspirations than simply being Carroll’s right hand man and the slow burning of his realisation that the cult’s Messiah may just be a straw man is superbly portrayed. 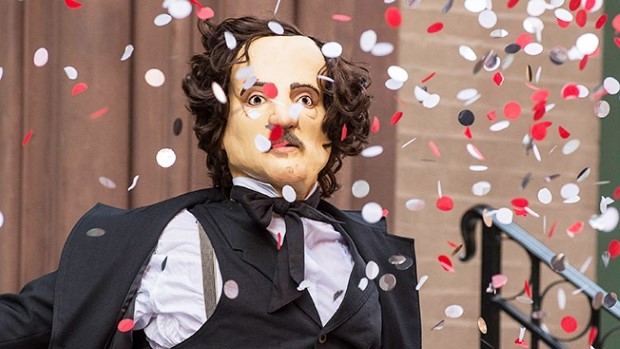 The Following starts off with an incredibly strong opening episode, but then nosedives into mediocrity incredibly quickly. Things pick up here and there, with one of my favourite episodes “Love Hurts” standing strong despite not actually advancing the overall story all that much, before hurtling towards the finale with a trio of much stronger episodes. This serves to highlight the main failing of the series: Its format. The Following tells an intriguing story that would be much better suited to a mini-series rather than a long form season. By separating the wheat from the chaff we could have been presented with something quite special, which makes the final product even more disappointing as a result. Special mention must go to the soundtrack, which features bands such as Marilyn Manson, Sepultura, Refused, Danzig and Deftones; whilst not to everyone’s tastes, these are some of my favourite bands and lend the show a certain aesthetic that complements the action onscreen, reminiscent of the soundtracks to the Scream films.

It’s not that The Following is mind-numbingly awful – Indeed it held my interest enough for me to watch the season to its admittedly well executed conclusion – It’s just that one gets the feeling that there is a truly great show hidden somewhere beneath all of the red herrings and filler, as shown through some of the more imaginative set pieces and the slow reveal of Hardy’s past, as well as the exploitation of his pacemaker acting as his Achilles heel and some of the truly surprising plot developments. By removing the extraneous subplots like the increasingly tiresome love triangles and tightening up the writing so that the middle of the season doesn’t seem to be running in one place, hopefully the writers can capitalise on this potential with the upcoming second series. 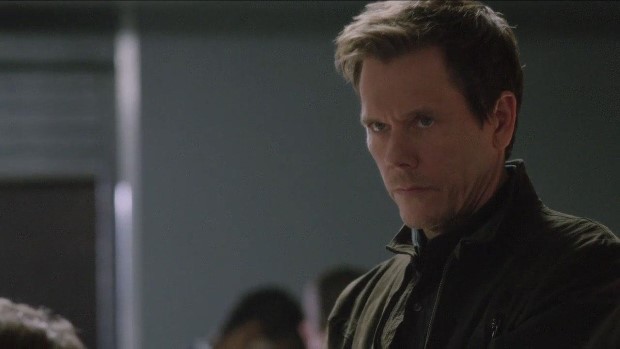 The DVD release of the following comes packed to the brim with supplemental features, including a handful of deleted scenes, Two commentaries and a selection of lengthy featurettes exploring everything from the mentality behind Carroll’s cult, set and costume design and the persistent appeal of Edgar Allen Poe’s body of work  to detailing the production process. Probably the most interesting is From A Dark Place, where the commentary on the episode is interrupted by interviews and little tidbits from behind the scenes. These looks behind the scenes clearly show the cast and crew’s enthusiasm for the show and offer some insight into the intentions behind Kevin Williamson’s concept, making for entertaining viewing that’s well worth a look for even the most casual fan. 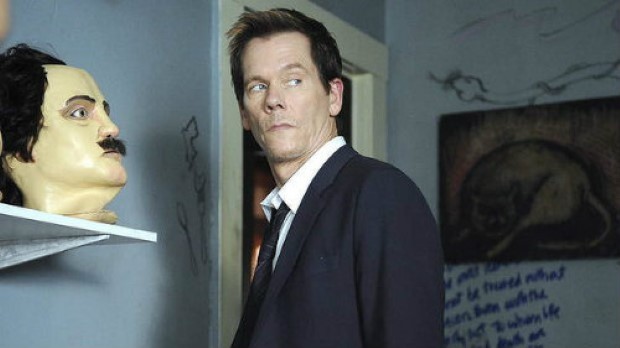 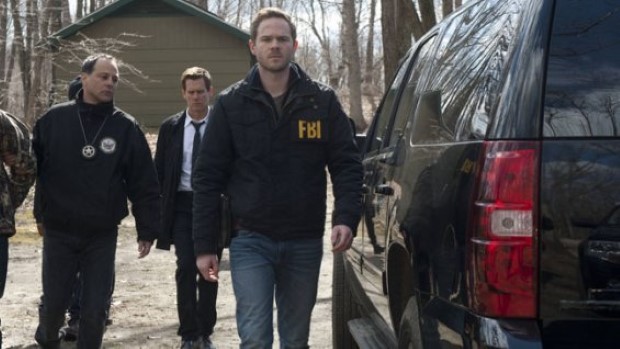 The Following requires a major suspension of disbelief to gain full enjoyment from its viewers; all too often the plot holes in the story threaten to widen into gaping chasms yet somehow the show manages to keep its footing and prevents toppling into the abyss. There are some truly inspired moments, unfortunately often bookended by generic cop show and horror film clichés, and although the writing does certainly come off as hamfisted and clumsy in areas, by the time the series finds its feet by the last few episodes you’ll be too taken to really care… As long as you can accept the show for what it is – Big, dumb fun with a killer cast, some of the most visceral slayings ever seen on prime time television and the potential to turn the central conceit of the series, that of the cult, into something rather special.