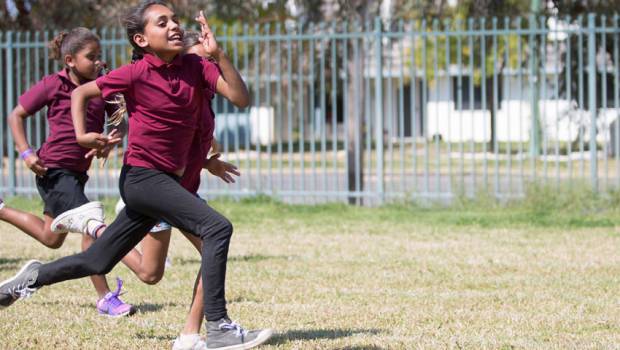 Summary: When Gem’s (Rhae-Kye Waites) mum dies suddenly her father Jay Jay (Wayne Blair) does not know what to do with her, leading her to seek solace in an emu.

A girl and her emu

When Gem’s (Rhae-Kye Waites) mum dies suddenly her father Jay Jay (Wayne Blair) does not know what to do with her, leading her to seek solace in an emu that she goes to visit so much she ends up wagging school and sneaking around stealing food for it.

In a small town like Brewarrina where everyone knows your business this is always going to cause problems, the local social worker Heidi (Georgia Blizzard) and local cop Stan (Rob Carlton) soon get involved and things are not looking too good.

This story feels very authentic given how big the town is and Sydney is so far away from it. The nearest large town, Dubbo, is about four hours’ drive away and the way it is spoken of the family does not go there that often. Sydney is not even mentioned due to being so far away and I wouldn’t even know how you would get there on public transport.

In an interview  the director Imogen Thomas said the story was based on her long relationship with the town and that she had made a short film based on local people’s experience. This story developed out that film and the director was serious about getting endorsement of the indigenous people involved in the story.

Rhae-Kye Waites as Gem seems quite natural as the young girl with her obsession over the emu, as if young girls aren’t obsessed with ponies and other such things.

Wayne Blair does well as the father with his own problems, I remember him from Mystery Road and many other productions.

Rob Carlton as Stan seems to be channelling Chips Rafferty as the local cop, a nice understated performance.

Georgia Blizzard as Heidi does seem somewhat out of place, maybe a surrogate for the director? Her character means well but she has to be told what do by the locals. In the end you see her being helped by them.

The rest of the cast is great, I especially liked the actor Lindsay Waites as Uncle Wes as he just was and hardly had to do anything to sell his performance. He knew what Gem was doing and knew enough to just let her be.

A bit strange that Jay Jay defied the wishes of his mum, the Mrs’ I know would have slapped him around for that. Every female indigenous elder past a certain age is Mrs, you don’t even ask if they are married at least in the town I grew up in.

Gem’s best friend Tessa (Stella Carter) is not indigenous so there is still hope in the town. I can remember being encouraged to have indigenous friends growing up. The one time we went over to the beach he said he had never been despite it only being an hour’s drive away.

I would recommend this film if you would like to see an indigenous story and learn more about the culture of the area. There are small things in the film such as Gem imitating the sounds of the emu with a tin that seem to be a natural part of the story.

Hopefully this movie ends up on the school curriculum or similar as it is something kids would benefit from seeing and does not seem like a lecture.