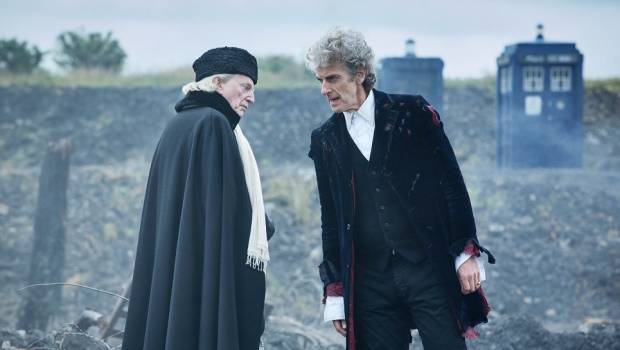 Doctor Who Twice Upon a Time DVD Review

Summary: Two Doctors team up to defeat an alien menace, allowing both Doctors to reconcile themselves to the end of their lives.

End of an era!

Peter Capaldi has always been a fan of Doctor Who, and once suspects has wanted to play the role for many years. It’s a little known fact that back in the early 70s, when the nascent Doctor Who fan community was just getting started, he almost launched a coup against the earliest Doctor Who fan club. This never eventuated, but there are certainly letters to the production team from Capaldi the Younger, peppering them with questions about the show.

Of course, its one thing to be a fan, its another to be an accomplished actor capable of taking on an iconic role such as the Doctor. But in an era where the new show has placed a premium on good looking, younger leading men, could Capaldi take on the mantle and not alienate the viewers?

In an era where television viewing has begun to collapse under the weight of streaming services, catch up television, and a multitude of other things to do online rather than watch television when it is actually scheduled, its no surprise that the overnight viewing numbers, still a key metric, softened and declined over Capaldi’s tenure. Some argue also that the era’s concentration on revisiting the past of the series, and a lead actor playing the role far more darkly than his predecessors, serve to alienate a segment of the audience who just didn’t come back.

All of this is unfair to Capaldi whose love for the character, and the potential of the character, shone through with each story. Starting off dark and occasionally bitter, Capaldi’s Doctor over time transformed into a better version of himself, redeemed in part by the companions who travelled with him and helped smooth the rougher edges to his initially prickly personality.

Twice Upon a Time, however, is not a very good send off for the Capaldi era. After the highpoints of the season finale, the Christmas episode very much feels like a coda in a minor key to the full orchestral blast that was All the World and Time and The Doctor Falls. There is no central villain, no animating idea to wrestle with and subdue. After all the sturm and drang of the Capaldi era, it is a curious choice by the showrunner, Steven Moffat, to have this Doctor go gently into the night.

There are highpoints. David Bradley revives the First Doctor almost flawlessly, apart from some interesting line readings at the start of the episode. He recognised very early on that an impersonation of William Hartnell’s first Doctor would place him on a hiding to nothing, so instead, he embodies most of this Doctor’s traits (except for the nonsense insertion of dialogue designed to make him seem like an antideluvian fogey) well enough.

Mark Gatiss appears, possibly for the final time in Doctor Who, playing the Captain, who has blood ties to an iconic character from the classic series. Gatiss has always been a stalwart participant in the new series, either as a writer or actor. His love for the show has always been pure, and if not all his scripts have shone as others have, when he does strike gold, such as in The Unquiet Dead or Cold War, he is a very effective contributor.

Steven Moffat also bids farewell as showrunner. While one can imagine the new showrunner, Chris Chibnall, not bringing Moffat back so he can stamp his own character on the show with new Doctor, Jodie Whitaker, one can imagine in the not too distant future Moffat may come back as a simple script writer. His time, and choices on the show, have been divisive. His insistence on rewriting key moments of the show’s history have proven divisive, but at the end of the day, as other writers and producers did in the past, he made up the show as he went along, bending the show’s canon to fit the needs of the story. On song, there is no better modern writer of Doctor Who. At his worst, he explored the nooks and crannies of his own fundament to deleterious effect. The king is dead, long live the king!

Special word should go to director Rachel Talalay. While the script is a little bit of a damp squib, her sense of visuals and indeed, visual flare, brings the story to life in a way no other director could. The visuals are lush and dynamic, the lighting moody and atmospheric. Her handling of the cast, and marshalling of the troops around her are masterful. One hopes this isn’t her last Doctor Who assignment.

Returning to Peter Capaldi. The man, the actor, was always a great ambassador for the show, never stinting his time with the fans, either at conventions or to the eager followers who would appear on set when location shooting was happening. Your reviewer will always look back fondly at his time on the show, when his darker, more dramatic portrayal of the character jibed with my sensibilities. Always brave, never cowardly, fierce and committed and passionate about the role, Doctor Who was well served by Peter Capaldi, and one trusts, it served him very well indeed.

Doctor Who Extra: Twice Upon a Time
A nice little feature that mixes a behind the scenes look at the making of the story, with cast and crew interviews, and a neat look back at Nicholas Courtney’s work as Brigadier Lethbridge-Stewart. There are two highlights for your reviewer – a close look at a recreation of the original TARDIS console room, which makes for a cleaner set compared to the cluttered version of the modern series. And there is a brief glimpse of the recreated set for the South Pole base that featured in The Tenth Planet. Don’t expect the feature to be a warts and all story – in today’s media massaging and messaging, keen fans will have to wait for the memoirs in twenty years time. Unlike Moffat, or Gatiss, or Bradley, or Mackie, we don’t get a direct interview with Capaldi, only a few comments he made to the crew immediately after filming his regeneration sequence. Perhaps emotions got the better of the man…

The End of an Era
We begin with a rare look at a script read through before plunging into a look back at the Capaldi era. This time, Capaldi provides a few brief comments about the episode to camera, but the bulk of commentary from him relies upon contemporaneous interviews during the course of his tenure. There’s no doubting Capaldi’s love for the programme, and his pride in gaining the role. The feature also looks at Steven Moffat’s work on the modern series, first as a scriptwriter, then later as a showrunner. Moreso than any other writer, Moffat’s impact on the series, including perhaps the classic series, has been the most profound. He leaves his time on Doctor Who with perhaps a mixed record – when his writing is on song, he has no peer in the modern series, but occasionally, his work has divided fans and fandom, to perhaps an unwarranted degree.

Doctor Who Panel: San Diego Comic-Con 2017
For those of us who have never been to a Comic-Con, wherever it is held, this full recording of the 2017 Doctor Who Panel is a fascinating insight. Featured are Mark Gatiss, Michelle Gomez, Matt Lucas, Pearl Mackie, Steven Moffat and Peter Capaldi. The reception is rapturous. For an old school fan like your reviewer, the outpouring of love and appreciation for the show is remarkable, and a little humbling. Moderator Chris Hardwick asks the not so hard questions, and it is a fun experience for those on stage, and the attendees.