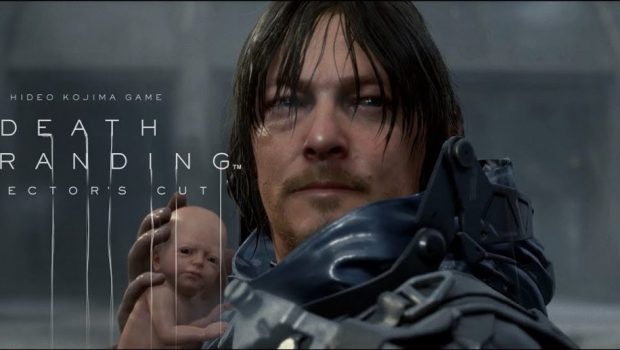 Back to the Beach

Kojima’s original (2019) Death Stranding remains one of – if not – the greatest modern games I’ve ever played. It’s not because of any singular factor about Death Stranding, per se, rather its packaged entirety. I honestly can’t recall an equal gaming experience of which total and complete immersion occurred…with the closet being The Last of Us. For myself, Death Stranding’s magnificent and wonderfully sequenced story line legitimately evoked sadness, anger, empathy and oodles of legitimate tears along the journey to The Beach.

Three years later, Death Stranding gets a somewhat surprising rebirth on the PS5 as Death Stranding Director’s Cut, with improved presentation, modes, and solid integration with the DualSense controller. Is it worth the price of admission? Most definitely. 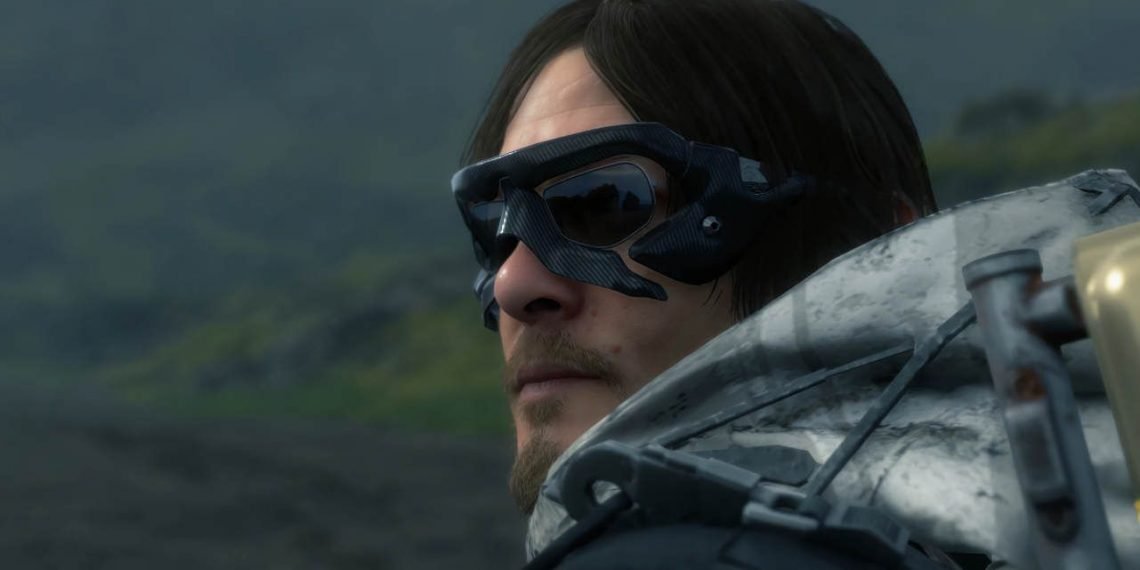 Yes, I’m a bit more bullish than original Death Stranding reviews found here and here. These same reviewers provide greater detail on the overall plot…and the game changed little in that area. (Thus, I’ll defer to those prior reviews for deeper dives.)

The summative version: the United States becomes overrun by deadly beings stuck between worlds (‘beached things,’ or BTs), often invisible enemies who produce ‘void outs’ (massive explosions) when consuming the dead. This U.S. is consequently a product of falling timefall, deadly rain home to BT colonies also a signal to oodles of chiral crystal needed for capability upgrades. In this chaotic world, gangs and factions naturally emerge, as a battle for resources inevitable. The protagonist – Sam ‘Porter’ Bridges – is both paid by and forms alliances with individuals for whom he undertakes seemingly impossible missions over treacherous terrain. There’s a logical reward calculus for managing heavy/fragile cargo across distances and dangers. Knot Cities emerged throughout the U.S., hubs trying (with Sam’s help) to re-establish a nationwide technology linkage (‘chiral network’) also find a way to defeat the BTs and end void outs forever.

You are thankfully not alone, helped by a ‘beached baby,’ or BB (a uterus carried in a containment device), that can detect BTs. This same baby will – over time – prove to be an incredibly meaningful companion in so many ways. Sam is also a ‘repatriate,’ a rarest of individuals who cannot truly die…and possesses blood useful in defeating BTs. He is likewise intimately tied to the ruling political family of the U.S., individuals who head the mission to unite the country for mixed ethical reasons.

Death Stranding employs an array of all-star voice/facial actors throughout, individuals possessing unique and engaging storylines behind them. The same can be said of others Sam can execute deliveries for and/or return cargo to. Completing these deliveries produces greater affinity ties and options to said characters. I don’t want to delve too much deeper at a risk of spoiler alerts. But note Death Stranding packs a very complicated storyline, one that starts to really make sense about 8-10 hours in. Hang in there, friends! 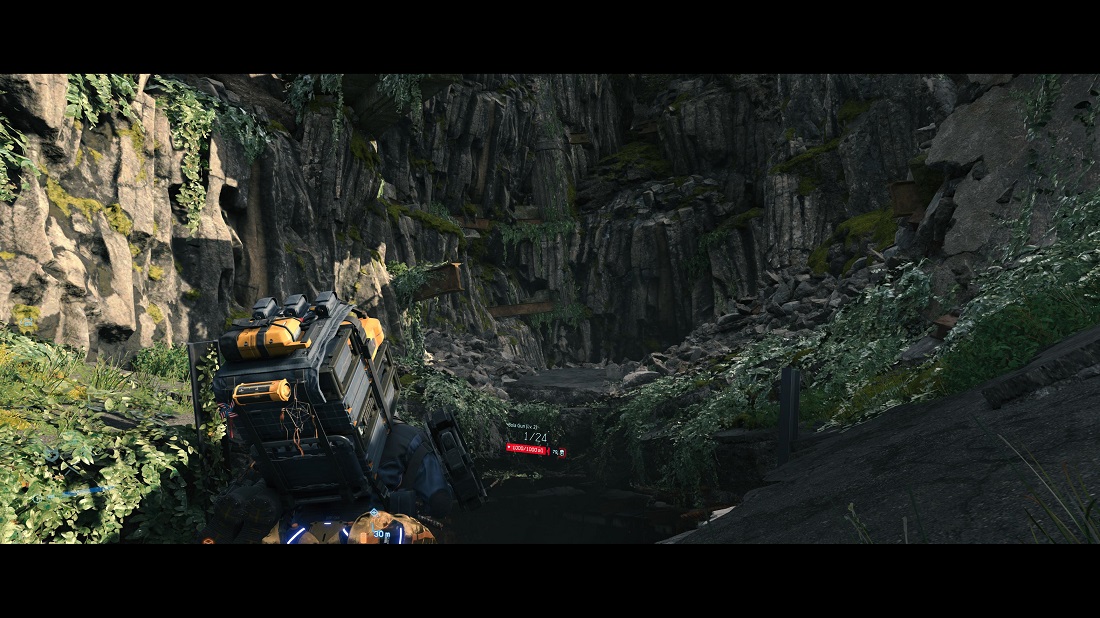 Also be warned: every step Sam literally takes captures the amazing despair of this United States. From first step. he battles the elements, detection from BTs, challenging physical environments, the shifting weight of often incredulous amounts of cargo, and timefall slowly deteriorating everything. At any moment, with any step, a tumble can send Sam careening down a hill and destroying long carried and invaluable cargo. Entering ‘MULE’ (mercenary) territory can quickly bring an army upon him, desperate for his cargo most of all. Killing a MULE seems like a good idea…until it produces a void out in its wake. The same conundrum arises by trying to carefully navigate through BT territory shortcuts. A wrong step and the masses are upon you, a quickly growing array of hands and bodies pulling Sam and his cargo down into death. The only answer is to desperately try to escape into who-knows-what…maybe salvage some cargo from what is left of a near-death debacle.

Unlocking new Knot Cities and regions is a serious accomplishment, every area genuinely unique. Unlocks are also accompanied by additional technologies and weaponries, both seeking to somewhat even the odds against the impossible. Not everyone is a fan of what Sam is doing, which makes the story even more intriguing.

Another great part of Death Stranding is the omnipresent contribution of other players who leave hints, ropes, ladders, etc., also donate vehicles, resources and related for you to use at key junctures. I can count hundreds of times these other players’ efforts came in so damn handy, and I love the endless ‘likes’ from those who use my stuff, in tandem. You can even run into other porters and physically hand each other goods, ditto upgrade each other’s structures all across the United States. Death Stranding truly does an amazing job of creating a porter community, one that really does work together for collective survival. The idiotic neon signs forcing cheap likes? Sigh, can’t win ’em all.

There’s just much going on – the constant struggles, the NPCs, the storylines and sidequests, the unique environments, the evolution of Sam and BB – that Death Stranding can captivate indefinitely. This is easily a 100-hour game if you let it stretch its wings. 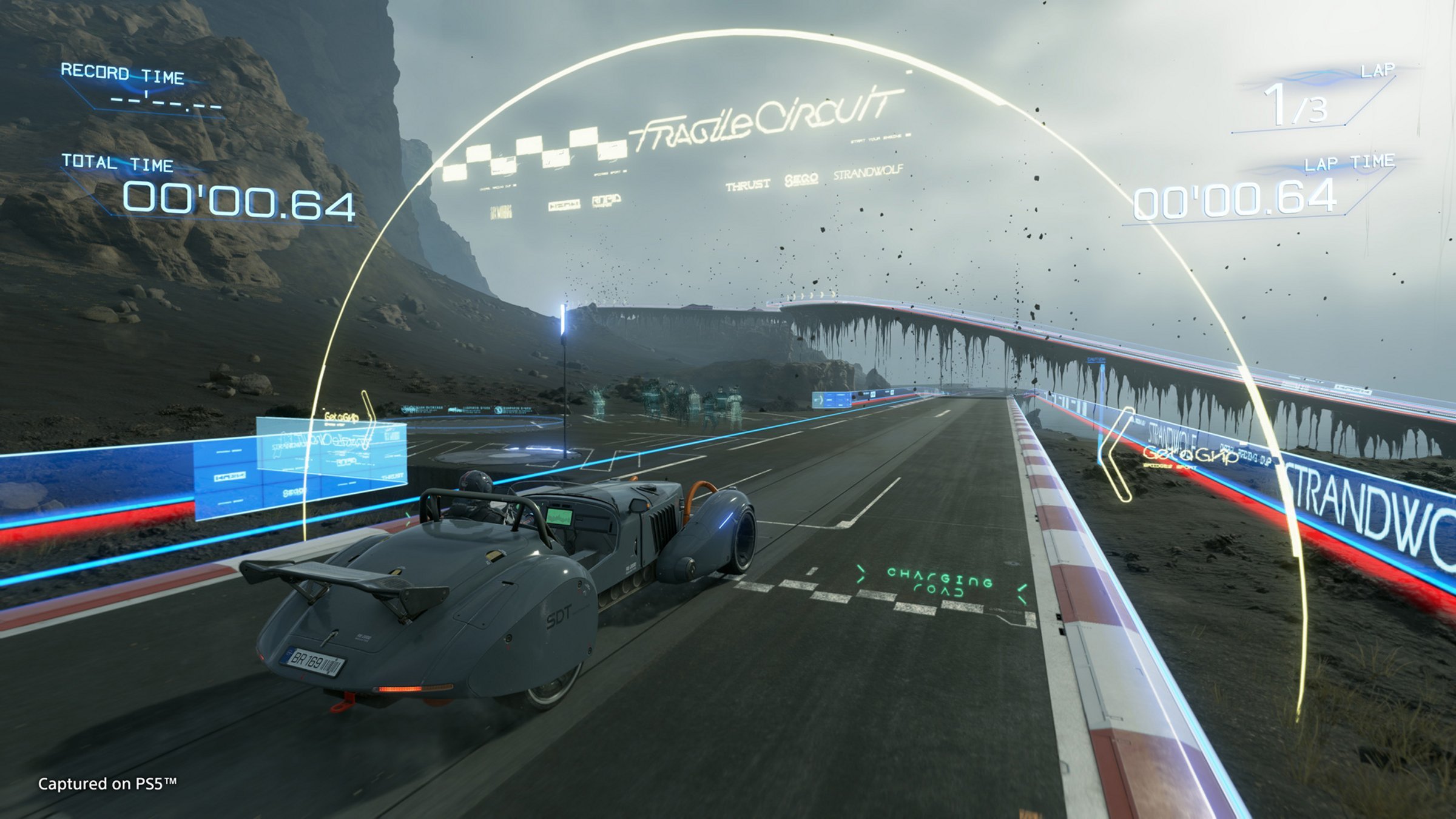 Perhaps the most significant upgrade is the perfect integration of the DualSense controller. Every step Sam takes is felt via vibrations, likewise the sound of differing terrain beneath his feet on the controller speaker. This increased sensation adds exponentially to the Death Stranding experience, so much so it’s so hard to explain without experiencing. You can now literally feel the incredible journey…and well. (Let’s just say carrying tons of cargo stacked 12 feet high…across snowy mountain ranges…in a timefall storm…‘aint for the faint of heart.) I can never go back to the original having experienced the PS5 version.

Related, the Director’s Cut made some solid decisions in providing more BB feedback throughout. Execute a solid footing save, a cool ramp jump, and/or similar smaller win’s for Sam, and BB and Sam will playfully interact. This keeps things moving a bit more fluidly versus waiting for key plot points and/or mess ups for such interactions. I also dig the decision to restore stamina plus provide likes when interacting with other players’ structures. One thing less thing to micromanage in the former, likewise drives home the point other players are out there.

Other improvements…nice but not truly necessary. A new Metal Gear Solid type training ground tests acumen on different weapon types. It’s a decent distraction, but nothing that will draw you back except to test weapons newbies have yet to unlock plus another way to upgrade character level/reputation. Similar sentiments surround the new racetrack. Cool…but why? Moreover, new speed boost ramps and chiral bridges now cut distances for Sam across gaps and rivers. They’re fun and look stellar, but seem more gimmicky than anything. Ditto for a new shock gun, also cargo carrying aids and a catapult. Perhaps it being a Death Stranding purist, but these seem misplaced in a world where flashiness and shortcuts in execution almost discouraged…? Last, there’s now full color and backpack customizations for an array of Sam’s items. Once more…fun, but not truly necessary. 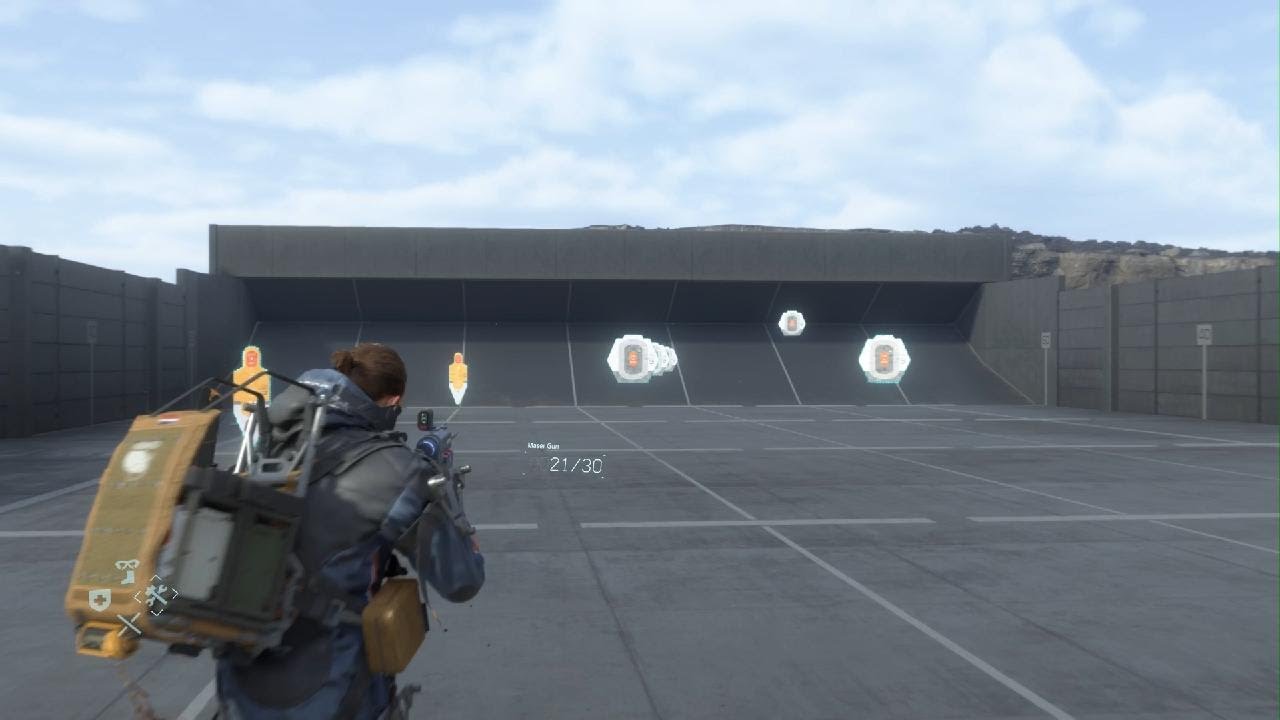 One major remaining complaint: there needs to be a better content/cargo management system. It’s still too convoluted, requires too much manual TLC, and would better be served by some guides as to how/when mix arrangements and gear. This flaw remains really evident when trying to quickly employ items, weapons and sister essentials during heated gameplay moments.

Also, barrier of entry isn’t any less for those jumping in to Death Stranding for the first time. While I respectfully disagree with some of my peers’ complaints in the 2019 review, they are spot-on in this a challenging storyline to truly embrace. The PS5 version is not likely to convert those truly against this game type and/or Kojima storytelling style

For a fan like myself, however, I’m saddened that most of Death Stranding Director’s Cut will lack the ‘wow’ factor that a truly new player will experience. Much like Ghost of Tsushima which just preceded it, this shouldn’t prevent veterans from diving back into The Beach on next-gen.

It’s easy to declare Director’s Cut the best way to play Death Stranding, period. It looks and executes like a dream, and crosses over PS4 saves seamlessly (to include perfect transfer of trophies). Its improved presentation and gameplay additions (notably DualSense integration) are stellar, and make a great game…even greater. Also, the new modes, items and options are icing on an already delicious cake. Death Stranding Director’s Cut is therefore an arguably must buy for PS5 owners new to the game, a solid upgrade previous players will definitely appreciate.