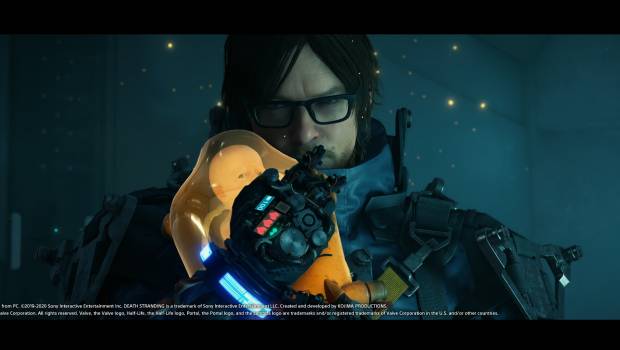 Summary: Death Stranding is highly divisive, but it's certainly unique

Death Stranding is a divisive game, and I’d expect nothing less from the mind that created Metal Gear Solid. Kojima has a consistent track record of creating larger than life, ridiculous movies that are masquerading as games. You as the player, likely fall into two camps. Camp A thinks that this is utter bullshit, that you just paid good money to play a game, and instead you are being forced to sit through cutscene, after cutscene, after cutscene. Camp B is fascinated, but very aware that what Kojima is making is at times utter trash, but they revel in the spectacle of it all. I fall into Camp B. I’m a Kojima fan. I like that he’s trying to do something different, and a little more successfully than someone like David Cage, who I feel is also trying to play in this “interactive movie space”.

So there was no question that I was going to enjoy Death Stranding. But that’s not my job here today. My job here is to look at this from the viewpoints of both camps, and see where Death Stranding falls on the spectrum. 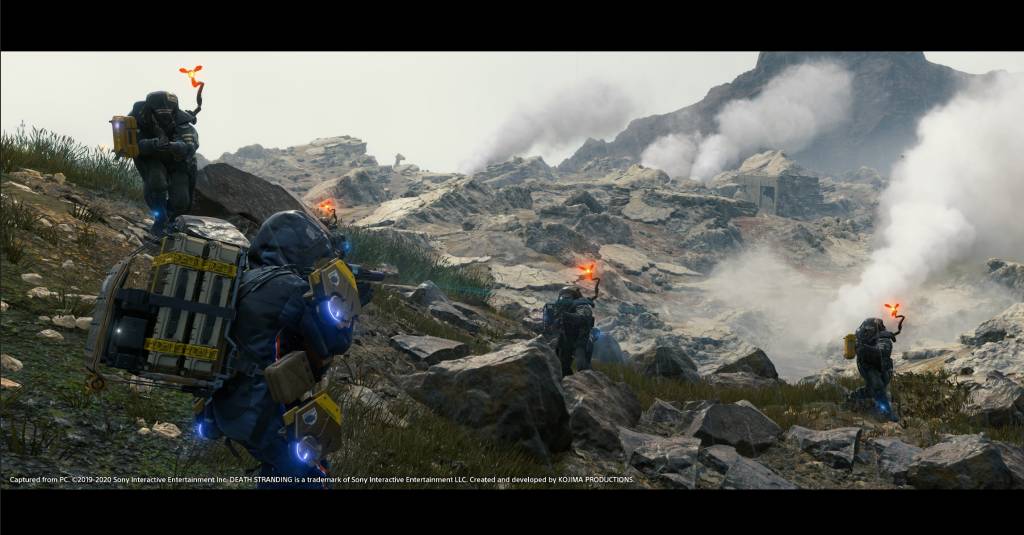 Some kind of apocalyptic-level event called “Death Stranding” took place, which has left humanity on the brink of destruction. Society is still functioning, barely, in small pocket sectors spread across the largely defunct United States. Ghosties are roaming the world, commonly referred to as BTs who are more than happy to dispatch of any humans caught outside of the secure shelters that each little pocket has built. To make things even more perilous, wildlife has ceased to exist, and rain now causes anything it touches to age rapidly, hence why it’s referred to as Timefall.

Are you with me so far?

You fill the role of Norman Reedus, I mean Darryl Dixon without his accent, uh, Sam Porter Bridges, the son of the president of the united states, who is an outcast delivery person who can sense the BTs out in the field, and is intent on making sure everyone gets their Amazon packages safe and sound. He walks the desolate wasteland, claiming to not care about the future of the United States, but still connecting the small pockets of society through the tried and trued method of the mail service. He’s also trying to reconnect these people to the Chiral Network, all in the name of progress.

Sam is also carrying a baby in a jar, Mads Mikkelsen is appearing pretty regularly, Guillermo del Toro is around, but it’s not his voice coming out of his digital body, Conan O’Brien makes an appearance, Monster Energy Drink somehow survived the Death Stranding event, and there’s some dude called Die-Hardman. Does he really just like Bruce Willis?

Death Stranding is batshit insane, and for many people, this is going to turn them off. For me however, this was an utter treat. This is the kind of weirdness you expect from someone like David Lynch, but in the grand scheme of things Kojima has always been shackled by his most successful franchise, so seeing him just let loose is… interesting. I didn’t say great, mind you.

There are times during this story where I can’t help but feel that it straddles the line of reverence for the great nation of America and what it has represented to our societal views, and a great comedic tragedy that is pointing out all the systemic flaws of a failing nation, that is trying to hard to cling to power in the modern times. Neither view is expressly implied, but it swings so far between the two, that Death Stranding seems to be making some kind of political statement, without actually making one.

“If I don’t really care about the story, will I like the gameplay?” is a question that people are going to ask. Probably not is the answer to that, but for similar reasons as to why the story will divide people who attempt to dive in. 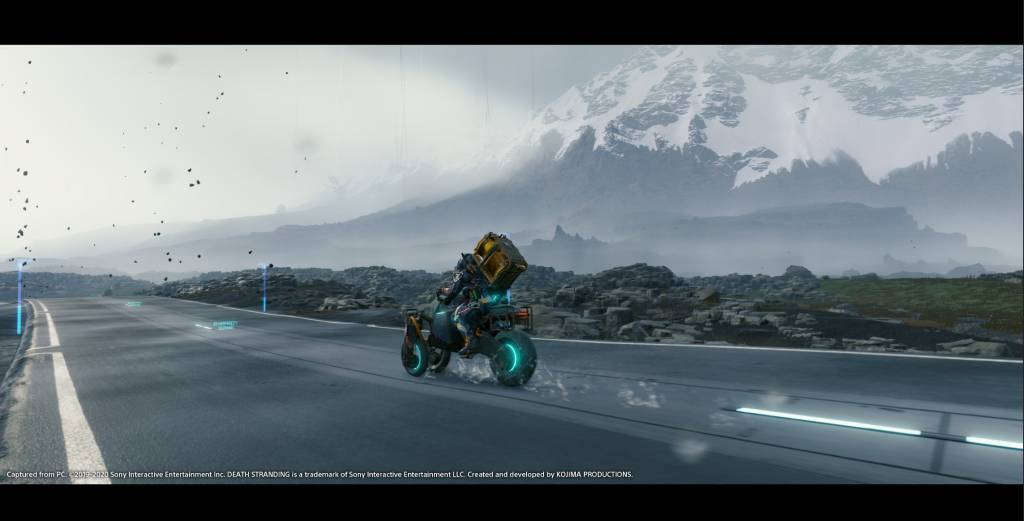 The quest design is simple. You take cargo from point A to point B. You are rewarded for your efforts with currency, and materials, which you use to develop upgrades and to make the treks easier to complete. Sometimes you will get thrust into combat instances. Other times you will be sneaking away from the menacing BTs that are chasing you throughout the mountains.

But it never really evolves, sans for a few set pieces that stand out. The combat is okay, but that’s not the main focus here. Kojima Productions has focused on creating an inventory management simulator like no other, and the combat feels to be just there to give your some cool stuff to do on occasion. It doesn’t feel offensively bad, but it doesn’t hold much weight or excitement at all.

So what is the star? Inventory management. Yep. This game is one hundred percent about loading up as much cargo as you can, and go climbing throughout the mountainous terrain. Sam will be affected by the cargo placement too, wobbling and almost toppling over, as he tried to carry huge weights up and down cliffs, over makeshift ladder bridges, and you will be constantly shifting his weight using your controller of choice.

Every rock will add a moment of uncertainty. Every time you pick up cargo you will need to consider how and where you will attach it. You will want to take your time considering these things, for fear of constantly shifting your weight as you walk for the next twenty minutes to your next destination.

Is it fun? Not really. Is it unique? Totally.

The cool thing with Death Stranding is that Kojima Productions has included a multiplayer component that fits directly into the theme. As you are out in the world, you can create makeshift bridges, or ladders, or climbing ropes to make journeys to particular areas easier. When you see someone has shortened the torturous climb by 5 minutes due to a strategic rope placement, that creates a true sense of community, a sense of complete adoration.

The PC version certainly looks a treat, and when comparing it to the PS4 Pro version, there’s a significant upgrade. Death Stranding certainly looks amazing, with some of the best mo-cap and environments you’re likely to see in a game for some time. It’s hauntingly beautiful, and when running at 1440p 144hz, you can’t help but really just sit back and appreciate the beauty on the screen.

But then you remember, what the hell is this game?

Can I recommend Death Stranding? It depends on which camp you sit in. If you want to see one of the most esoteric video games ever created, that has so many strange elements but none of them cohesively come together to make a traditional “game”, then yes. Dive in and revel in the madness that’s unfolding. If you want a good video game. I’d approach with caution.

For me personally, I loved it. I don’t really understand it yet, but the isolated walks and the rebuilding of connections, especially in the world we live in right now, it brought a lot of strange comfort.