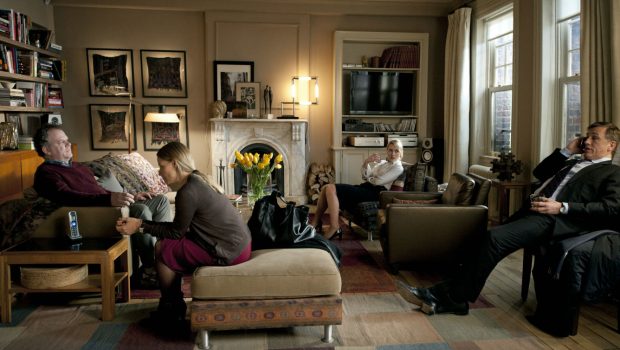 Summary: “Carnage” is one long argument between some parents of kids who had an altercation. It could have been an interesting social experiment but is instead incredibly boring & throwaway.

It is to be expected that kids will behave badly at times because they’re children. But the film “Carnage’ is about some adults – four parents to be precise – behaving badly. The story is a long, slow one that shows a disagreement between some onerous people escalating to an argument of epic proportions.

This film is based on the award-winning play by Yasmina Reza and is directed by Roman Polanski, who is no stranger to making films in a single location. The original story was written in French and there seems to be something lost in translation here, because some of the subtlety is missing and the plot seems too thin to sustain a feature-length film. There is also a gnawing sense of claustrophobia as you watch these four adults cooped up in a small space where a little voice inside of you screams, “Why don’t they just leave for heaven’s sake?”

The cast of this film is not to be underestimated, especially when you consider the number of Academy Awards and nominations they share amongst themselves. Jodie Foster stars as a sanctimonious, politically-correct mother who puts on a good front with respect to her family and her marriage to an all-round nice guy played by John C. Reilly. The pair have company because their son requires expensive treatment following an attack by another eleven-year-old boy with a stick.

The other couple who are invited around include a disinterested and preoccupied attorney (Christoph Waltz) and an investment banker (Kate Winslet) who is at her wits end. The four adults initially start things off civilly enough but as the film progresses some dirty laundry is aired and things become more and more ridiculous. Consider that Winslet vomits over some expensive art books, a phone is intentionally broken, the disposing of a hamster is discussed at length and the couples become increasingly drunk and crazy while playing the blame game. It’s the kind of story that could have made for an interesting enough social experiment but it’s tough viewing because the characters – except Reilly’s Michael – are all incredibly unlikeable.

The special features on the DVD include lots of in-depth interviews that are captured on the red carpet, in some “actors” notes with the cast and through an excerpt from an evening with Reilly and Waltz. The DVD also includes a trailer for the film. The person most noticeably absent from this additional content is Mr Polanski himself but he is perhaps too important to be involved in any of this.

“Carnage” is a film where resentments ride high as two couples disagree about a range of different topics. It’s a domestic dramedy that shows how quickly things can backfire and disintegrate into sheer damage. It’s an interesting idea and theory and while the ingredients seem good enough on paper the result is something so dull and bland it’s like eating a bowl of boiled rice because you may be sated at the end but the journey was completely forgettable.