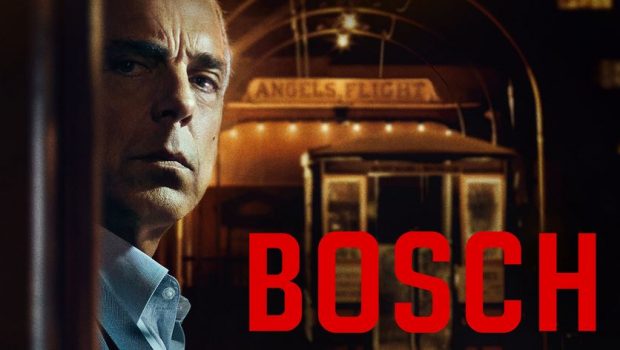 Hieronymus ‘Harry’ Bosch is the creation of American crime writer Michael Connolly. First novel Black Echo was published in 1992 and a steady stream of titles featuring Bosch have appeared in the years since. In 2014, Amazon began releasing 10 episode seasons. Series 4 is based on an early book titled Angels Flight.

Bosch is a former army Special Forces operative who served in the First Iraq War and later in Afghanistan, before working as a homicide detective with the Hollywood Division of the LAPD. Beset by the sort of personal demons that would make most people go weak at the knees, he is a hard charging, no-nonsense LAPD detective who follows a righteous path. Played by Titus Welliver, there is also a melancholy edge as Bosch tries to do the right thing while coming right up to the edge separating the respect for justice and the imperative for revenge.

Season 4 opens with the murder of a high profile attorney representing a black man claiming police brutality and torture. In the Bosch series, the interplay between crime fighting and the pressures of politics, in the shape of the Los Angeles Mayor, figure prominently. The idea that a black attorney, murdered while promoting the case of a maltreated black civilian, is enough for the Mayor to order a task force is set up with Bosch as the lead.

Bosch has maintained a high level of storytelling and character development over the first three seasons, and this latest season is no different. Series developer Eric Overmeyer and his team of writers have assembled a fine cast of actors who all bring something unique to the series. Welliver is a revelation – not the sort of clean cut figure that headlines other cop drama shows, he nevertheless commands the screen with his charisma and no nonsense attitude. Welliver brings a lot of vulnerability to the role, especially when he is dealing with his teenage daughter, Maddie, played by Madison Lintz (The Walking Dead) and also his ex-wife, Eleanor, played Sarah Clarke (24) who features prominently in this latest series. Finally, the main cast is rounded out by Jamie Hector as Bosch’s partner Jerry Edgar, who plays a fine foil to Bosch, while also dealing with personal issues.

The golden age of television (or in this instance, streaming) with its limited runs of episodes, and consequent focus on tight plots and character, is perfectly suited to Bosch. With each season based on one or more books by Connolly, there’s a freshness and fidelity to the writing that bring the episodes into a coherent whole. Back in the 80s and 90s, when commercial television had a stranglehold on episodic television, seasons ran for 20+ episodes, with consequent bloat and wide variability in quality. Nowadays, series like Bosch bring a novelistic approach to the storytelling, with a definite beginning and ending, coupled with compelling through lines that if handled correctly bring a great deal of satisfaction to the audience.

And satisfaction is the overwhelming sensation I had when watching this series. The performances are high, as are the stakes, both personally and professionally for Bosch. It is a real pleasure to see the actors working with such fine material as it is to see the evident enjoyment had both on and on the set (follow Welliver on Twitter and you’ll see what I mean). There’s a weight to all the performances that makes the compellingly believable.

Bosch series 4 touches on a number of events that have roiled America over the last few years. The treatment of African-Americans by law enforcement forms a flashpoint that features in this episode, as activists picketing Bosch’s station complicate efforts to placate the public and find the killer of the attorney. The way politics and law enforcement intertwine in a city where officials on both sides are elected, claiming competing mandates, is handled well in the offices of the Commissioner of Police, played beautifully by Lance Reddick (The Wire) and the Mayor, Hector Ramos (Yancey Arias). It isn’t just the criminals who play dirty.

But most of all, Bosch season 4 is damned entertaining. With the whiff of police corruption hanging in the air, infighting within the police establishment and the Mayor’s office, Bosch’s ongoing fraught, but loving relationship with his daughter and ex-wife, and a fine, compelling mystery of who killed the attorney, this latest season is the complete package. And the best thing of all is that Overmeyer and his team have barely scratched the surface of all those dark novels by Connelly.

There are no special features on this set, which is a pity as there’s an opportunity missed to really go behind the scenes. The visuals and audio are what you expect of modern day television releases, with the imagery sharpy and shiny and the audio crisp and percussive.