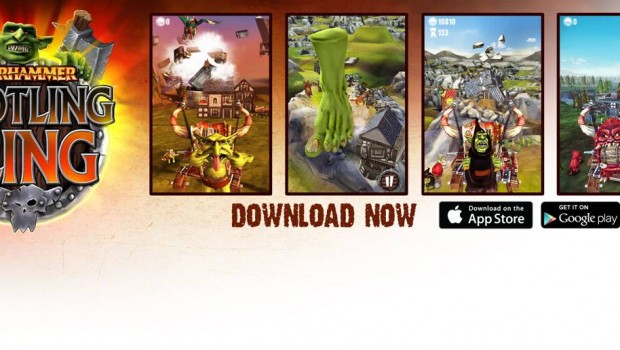 Games Workshop® and Wicked Witch Software have teamed up to bring you a new Warhammer game for your mobile. Warhammer®: Snotling Fling™ sees the player journey to the Warhammer Old World to join the infamous Orc Warboss, Gorbad Ironclaw in his Waaagh! against The Empire.

The Greenskins of Warhammer have been brought to life in an epic 3D world that fits in the palm of your hand. Players gain control of a goblin war machine and are tasked with bringing down human fortifications using a crazy cast of Snotlings as ammunition.

Snotling Fling has 60 fun and challenging Levels of puzzle based gameplay that requires the player to carefully aim their Snotlings at enemies to eliminate them with a set number of shots. And of course, there’s Magic! Players can also knock down enemy fortifications with a number of realm shaking spells that can make Squigs rain from the skies and even summon the Foot of Gork. Spells cost Teef to cast which players collect as currency on their quest to destroy The Empire and defeat the Amber Wizard Ostergrim.

Daniel Visser, Managing Director of Wicked Witch Software stated “It’s incredibly exciting to be working with Games Workshop on the Warhammer license. Many Wicked Witchers, including the games Producer Krister Monsvik, and Lead Programmer, Stephen Anderson are huge Warhammer fans, and we’re confident that this shines through in the game.”

Warhammer: Snotling Fling is a smashing addition to any Warhammer fan’s phone, and if you’re not yet one of them; this might be the game that gets you on board. Download now from the App Store or Google Play and join in the Waaagh!