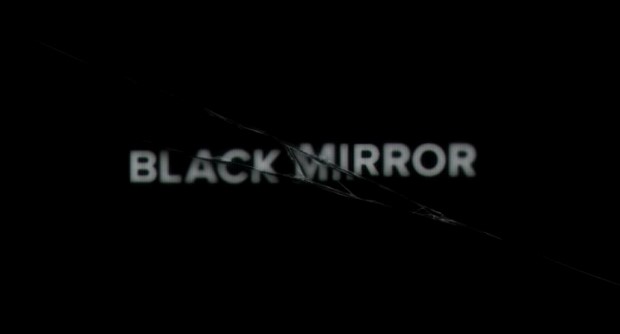 Summary: Witty, introspective and haunting, each episode of Black Mirror will hit you like a ton of bricks and leave you gasping for more. As is to be expected from an anthology series some episodes are inevitably stronger than others but each are loaded with slick writing, pathos and a darkly satirical core that asks you to question certain facets of our society’s obsession with technology and social media.

I first encountered the stellar work of Charlie Brooker through his involvement with the efforts from my favourite satirical comedian Chris Morris, having been on the writing team for the Brilliant Brass Eye and co-creating the information age parable Nathan Barley; I later stumbled across Charlie Brooker’s Screenwipe, a caustic review program that dissected the glut of manipulative media on our screens, and Dead Set, a satirical mish-mash of reality television tropes and zombies, two programs that only served to elevate my regard for Brooker even higher. So it was with great anticipation that I came to his latest endeavour, the critically acclaimed techno-paranoia fuelled Black Mirror.

The title for the series comes from the black mirrors that dominate our modern lives: The cool reflection of a flatscreen, a smartphone, a laptop; modern contrivances that herald the encroachment of technology into our daily lives, affecting our interactions with one another, the way we digest information and how we dictate the world around us via the use of mediums like social media platforms. Brooker has said that the episodes of Black Mirror are essentially all about the way we live now – and the way we might be living in 10 minutes’ time if we’re clumsy, a frightening yet all too plausible prospect to consider. 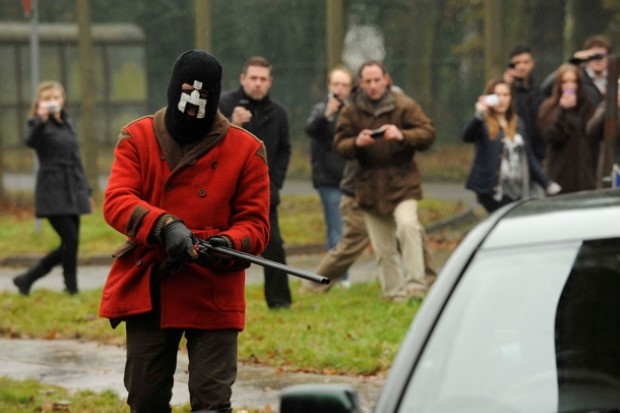 For while the realities in which these stand alone tales take place may seem far removed from our own, the steady ascent of technological innovation and public adoption mirror that of our own ever-changing existence: who’d have thought, even ten years ago, the myriad of things possible to control through one little device in our hands, ostensibly a phone but used for an infinite amount of other purposes? And what aspects of our innate humanity do we willingly sacrifice at this altar of technology for the sake of convenience? Social interaction and personal relationships? Privacy and basic freedoms? The voyeuristic mindset that sees a person whip out their phones to film an assault rather than attempting to break it up serve as a chilling reminder that technology IS changing the way we view the world; we’re now more detached and complacent, desensitised to acts once considered outrageous through our voracious consumption of readily available images and videos and the ability to share our thoughts on every subject under the sun on a variety of social media platforms, influencing the trajectory of politics, business decisions and public opinion.

It is this reality that Charlie Brooker holds a mirror up to and asks us what we see in the distorted visage that’s staring back at us, and all too often the answer is ourselves; maybe not verbatim but the reflection is certainly composed of elements of our society and may even be a prescient glimpse into our very near future.

Black Mirror – The Collection feature five self contained episodes from the show’s run, unfortunately omitting Fifteen Million Merits, the second episode of the first series, due to licensing issues regarding music used in the X-Factor-esque panel show that features in the episode. This is regrettable as the episode is an interesting commentary on fame obsessed consumerist culture and portrays an incredibly realised Sci-Fi dystopian world that’s probably the most removed from our own in the entire series, but thankfully the rest of the episodes more than make this an essential purchase. 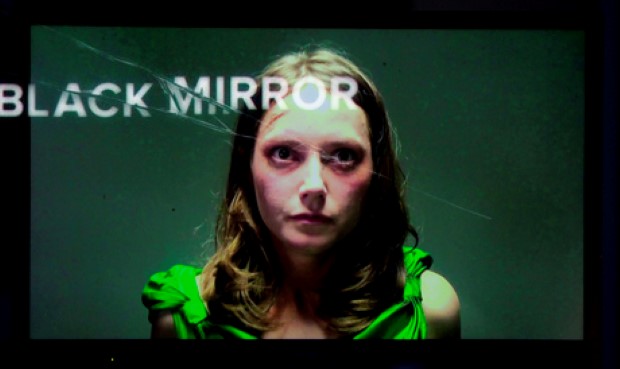 First up we have The National Anthem, where British PM Michael Callow finds himself holding the life of a member of the Royal Family in his hands. Princess Susannah, dubbed The Facebook Princess due to her engaging with the public via the social network, has been abducted and the demands of the kidnappers are quite unique: To ensure her safe release Callow must engage in an un-simulated sexual act broadcast live on national television… With a Pig. Facing ever mounting pressure from the Royal Family, News outlets and the public via Twitter and other forms of social media instantly revealing the effects of his actions – Or lack thereof – on the opinion polls, Callow finds himself an unwilling pawn caught between a sick display of public humiliation or having the blood of the Princess on his hands. 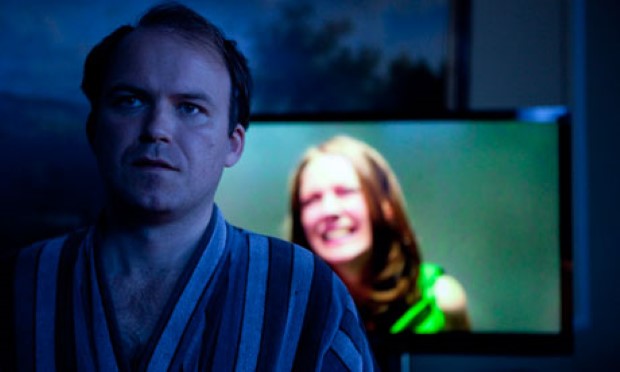 Next is The Entire History of You – The rights to which were recently purchased by Robert Downey Jr. – Which posits a world where nearly everyone is implanted with “The Grain”, a device that records everything the user sees and allows them to playback scenes from their life at their leisure, much like TIVO for the brain. Following Liam, a young Lawyer, the episode explores the detrimental effects that can come from being able to access every incident in one’s life on a whim, allowing them to obsess over the minutia of social encounters and the emotional disconnect that can come as a result of it.

The second series opens with Be Right Back, where a grieving woman named Martha discovers an online service that promises to allow her the ability to communicate with her deceased partner through an algorithm that collates all of her partner’s past online communications to create a virtual approximation of her loved one. Initially reticent, loneliness and the discovery that she’s pregnant with her partner’s child cause her to explore the tantalising promises of the service, with unexpected results. 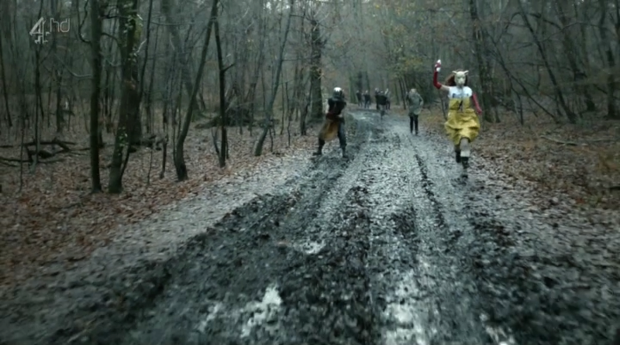 White Bear, easily the most horror-centric episode of the series, follows a young woman named Victoria as she awakes, amnesiac and disoriented, in a town where the television emits a signal that has turned nine out of ten people into mindless voyeurs that incessantly film everything on their mobile phones. Seeking assistance, Victoria encounters a shotgun wielding “Hunter”, a masked man unaffected by the signal who seems to revel in stalking and murdering survivors. Joining forces with fellow unaffected survivors, Victoria discovers that the world has collapsed into chaos since the signal started airing, allowing murderous masked men and women to slaughter people as they wish, all while being filmed by the cameras of the voyeurs. Victoria and her cohorts must travel to White Bear, a transmission tower broadcasting the signal and destroy it whilst trying to piece together the fragments of her true identity… But is everything really as it seems? 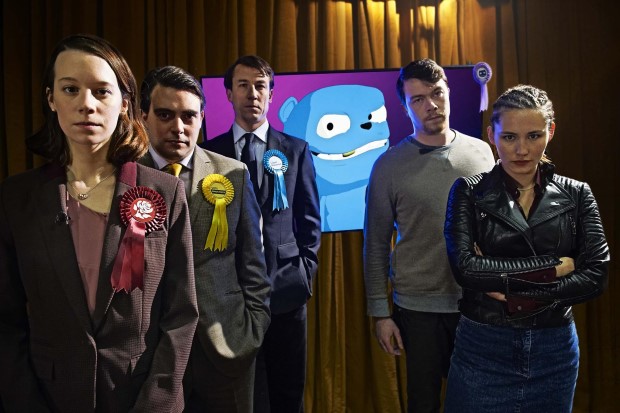 Finally we have The Waldo Moment, an idea apparently originally conceived by Brooker whilst working on the aforementioned Nathan Barley. An obnoxious, foul-mouthed CGI bear named Waldo, one of the mainstays of a late-night satirical comedy program, becomes the anarchic face of a local political election when his attention grabbing antics soon morph in to a viable attempt at being elected. The man behind Waldo is a depressed failed comedian named Jamie who finds himself overwhelmed by the massive popularity of his creation whilst he still wallows in relative anonymity; as the election rolls on, certain parties becomes interested in using Waldo to further their own desires, leaving Jamie in a moral quandary that may very well be his undoing.

Brooker writes all of the episodes, bar The Entire History of You, which is penned by Peep Show’s Jesse Armstrong, and each one raises its own uncomfortable questions. Black Mirror is a slyly subversive take on technology’s place in our modern society and the culture we’re inadvertently building up around it, and is often amusing, terrifying and bleakly depressing all at once, forcing us to look at the detrimental effects our reliance on the innovative accoutrements of our lives can cause. 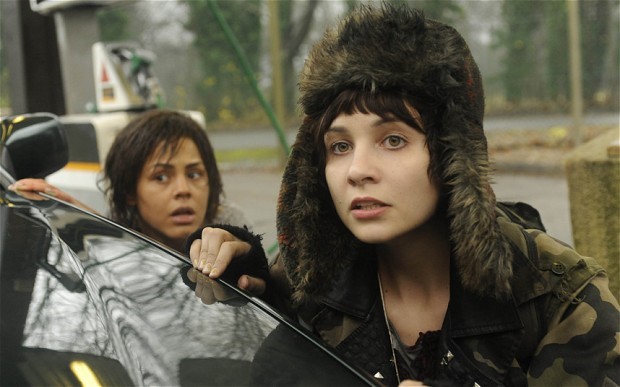 There are unfortunately no supplemental features on this release, which is a bit of a shame as the addition of a few commentaries by Charlie Brooker would have had the potential to further reveal the inspiration behind the episodes and expand upon some of the subtext and social commentary that underlie each episode. 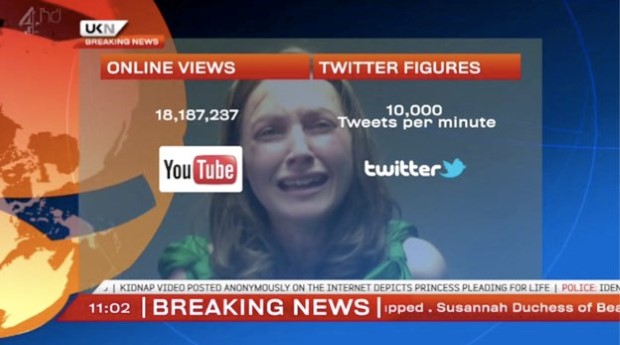 Witty, introspective and haunting, each episode of Black Mirror will hit you like a ton of bricks and leave you gasping for more. As is to be expected from an anthology series some episodes are inevitably stronger than others but each are loaded with slick writing, pathos and a darkly satirical core that asks you to question certain facets of our society’s obsession with technology and social media. Madman’s transfer is of the utmost quality and having all but one of the episodes collected onto one release makes this an ideal jumping off point for anyone interested in exploring the work of Charlie Brooker. Black Mirror is entirely unlike anything else on television and is all the better for it. Highly recommended.