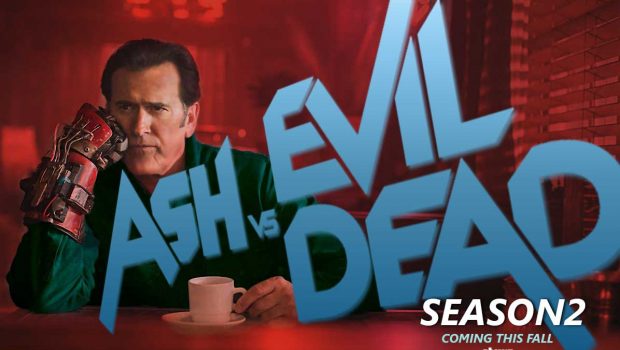 Summary: Ash vs Evil Dead Season 2 expands on the first season and delivers a thoroughly enjoyable romp through the 80's... whaaaat?

The craziness of Ash vs Evil Dead returns for its second season as the totally awesome Bruce Campbell brings his A game back to the role of Ash. Season 2 also feels more focused as not only do the actors now have a handle on their characters but the protagonist seems to have found his feet which makes for better stories… he’s also less of a douchebag. With that said, Season 2 still has all the craziness of the films and last season, including some very hardcore denizens of hell plus lots of over the top gore.Ash vs Evil Dead Season 2 explores the psyche of what makes Ash tick as we discover what happened to this character after the films, including being disowned by his family and friends with a great trip to the 80’s. This also makes Ash more relatable, even though he’s still crazier than a hatter. Further to this, the friendship between Ash and Pablo is fleshed out who becomes physically connected with the Necronomicon which started this hellish adventure for Ash. The villain in season 2 is Baal who is equally as nuts as Ash and both characters have some very amusing moments.

Another twist to this story is the time travel aspect which does make for interesting story telling, especially with the Ash’s home town. We also learn more about Ruby (Lucy Lawless) as the half human/demon warrior who still channels her inner Xena who also (so to speak) takes Kelly under her wing. Needless to say both characters definitely added to where season 2 was headed and more importantly, watching these two grow was a treat.

Ash vs Evil Dead Season 2 was far superior than the previous season and once everyone found their groove, the direction of this season was a much more dynamic and cohesive journey, opposed to the chaos of the road trip from last year which was still fun.

Like previous versions of Ash vs Dead, this series does not take itself seriously at all which is where it shines, especially with its humour plus great one-liners from Ash and it’s sometimes over the top and disgusting gore. This season also has a very puke worthy moments and if you loved the previous season of Ash vs Evil, season 2 delivers even more entertainment. 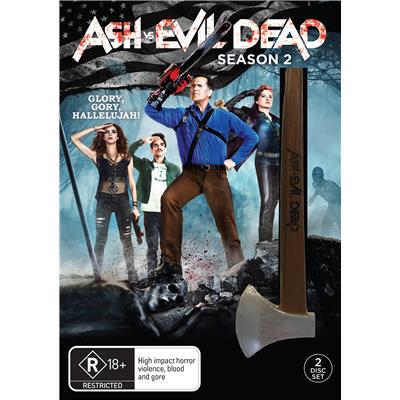 Episode 1: Ruby breaks her truce with Ash, sending deadites to attack him in Jacksonville. After he fends them off, Ash, Pablo, and Kelly travel to Ash’s hometown where Ruby is hiding… and discovers that she needs their help. Meanwhile, Ash has a reunion with his father Brock.

Episode 2: While Ash and Kelly recover the Necronomicon from where Ruby hid it, Ruby questions Pablo about his recent visions.

Episode 3: After teenagers steal the Delta–and the Necronomicon–Ash throws a party to lure them in. Meanwhile, Brock learns first hand about the Deadites.

Episode 4: While Ash tries to deal with his possessed Delta, Pablo receives an offer from the Necronomicon. Meanwhile, Kelly and Ruby join forces to take down the Spawn.

Episode 5: Baal is free to walk the earth… and pays a visit to the sheriff’s station where Emery has arrested Ash for Amber’s murder.

Episode 6: Ash and the gang take refuge in his old house and he faces a blast from the past. Meanwhile, Thomas leads the angry mob against Ash, and Baal leads Thomas.

Episode 7: Ash wakes up to discover that he’s in an insane asylum, and a helpful Dr. Peacock is trying to break him of the delusion that Deadites exist.

Episode 8: Pablo is besides himself with enthusiasm after he manages to defeat Baal. Meanwhile, Thomas loses his head with grief over his daughter, and Kelly lends a hand to Ashy-Slashy.

Episode 9: Ash, Ruby, and Kelly travel back to 1982 to stop Young Ash from reading the Necronomicon, thus keeping Pablo from ever dying. However, Ash discovers that things have changed, while Ruby and Kelly get to the root of the problem.

Episode 10: In 1982, Ash discovers that Baal has set the whole thing up and the two men fight to the death. Meanwhile, Ruby makes Kelly a deal she can refuse, but it would be wiser if she didn’t.