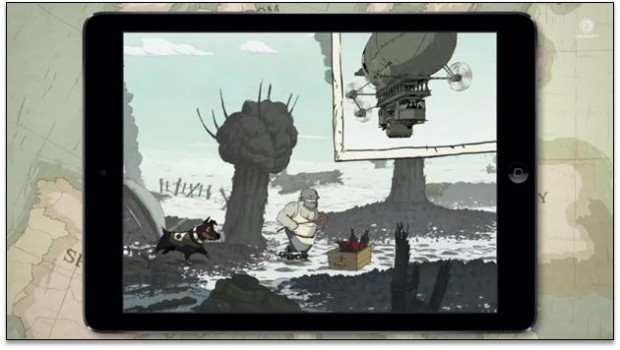 Sydney, Australia — August 13, 2014 — Ubisoft announced today that Valiant Hearts: The Great War™, the puzzle-adventure game set during the World War I, will release on September 4th, 2014, only on the App Store.

This mobile version coming on iPad, iPhone and iPod Touch introduces intuitive touch controls, completely rethought and adapted to the mobile format, making Valiant Hearts more accessible than ever before.

Valiant Hearts: The Great War™ is the story of crossed destinies and a broken love in a world torn apart. All of them will try to survive the horror of the trenches following their faithful canine companion. In Valiant Hearts, the lives of all these characters are inextricably drawn together over the course of the game. Friendship, love, sacrifice and tragedy befall each one as they help each other to retain their humanity against the horrors of war.

Valiant Hearts: The Great War™ is being developed by a small team at Ubisoft Montpellier, known for their work on critically-acclaimed titles like Beyond Good & Evil®, Rayman Origins® and Rayman® Legends. The team is using the UbiArt Framework to easily and efficiently animate the game’s comic-book style, which consists of a wide-ranging color palette – from the dank trenches to green forests and snowy fields – that provides stunning scenic variety and visual contrast. Ubisoft’s UbiArt Framework is a powerful engine that lets programmers and artists to bring their art to life by allowing original concept art to be inserted unedited into the game world.