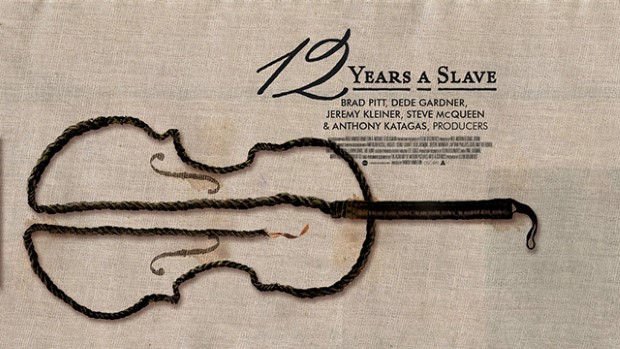 Summary: The film is an astounding achievement in both a technical and emotionally stirring sense, but the very bleakness of the source material makes for a harrowing and affecting event that will stick with the viewer long after the credits roll.

For many viewers Steve McQueen’s on-screen adaptation of 12 Years a Slave will be their first introduction to the harrowing tale of Solomon Northup, a successful and well educated violinist who finds himself kidnapped and forced into a life of slavery.

Taken from the source material of the 1853 memoir of the same name, the film introduces us to Solomon, portrayed by Chiwetel Ejiofor (Serenity, Children of Men), as he cultivates a prosperous career in Saratoga, New York, leading a comfortable existence with his wife and two children as a free man. While his wife travels away each year with their children for a cooking job, Solomon goes about building a solid reputation as a talented violinist.

Convinced to join a travelling circus for two weeks to make a bit of extra money performing background music for the acts, Solomon makes the fatal mistake of neglecting to inform his wife of the job opportunity. 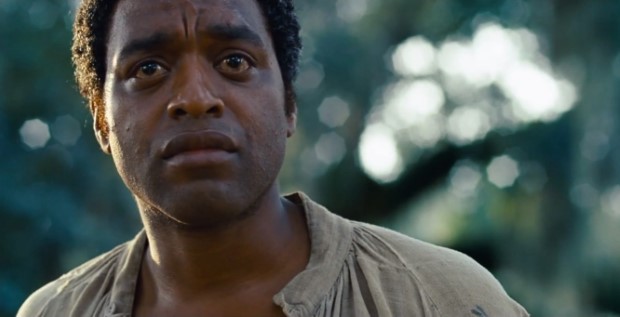 As it transpires, the men who offer Solomon this position have a far more nefarious agenda: they offer false prospects to ensnare unwitting African Americans before drugging them and then selling the unfortunate targets on the underground slavery market.

Torn away from his life of relative privilege and the papers declaring him a free man taken from him, Solomon is given the new name of “Platt” and is forced into slavery after being smuggled to Louisiana. Quickly realising that hope is lost after witnessing the way slaves are treated as mere pieces of property, he quickly learns to feign ignorance rather than suffer death upon knowledge of his education becoming public. 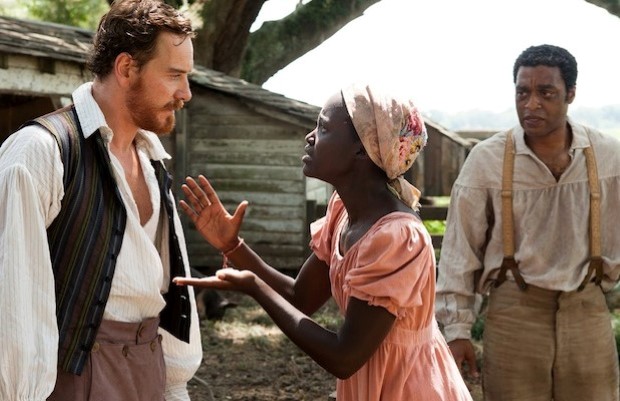 Initially sold to relatively compassionate plantation owner William Ford (Benedict Cumberbatch) – Well, as compassionate as someone who “owns”’ slaves can be, anyway – Solomon quietly settles into a life of servitude, quickly getting on Ford’s good side by showing initiative by alleviating the workload of transporting materials through the swamps. However this has the unfortunate side effect of raising the ire of plantation overseer Tibeats (Paul Dano), a vengeful man who quickly becomes fixated on constantly illustrating his perceived superiority over Ford’s “pet” slave.

The situation soon escalates to the point where Solomon, after a particularly disturbing sequence featuring an attempted lynching, is reluctantly sold off by Ford to a cruel and highly religious slave owner named Epps (An electrifying performance by Michael Fassbender) in order to save his life. 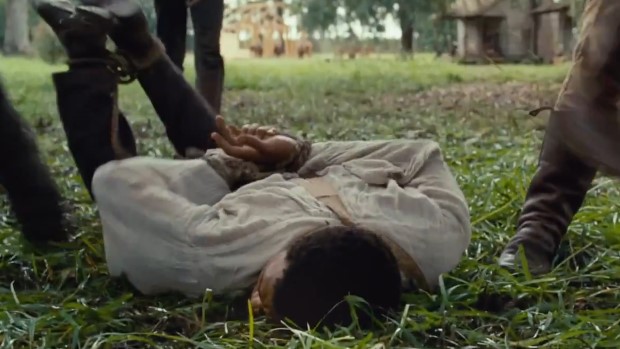 Unsurprisingly, things are much harder on Epps’ plantation, with the borderline delusional and sexually promiscuous slave master justifying his abhorrent behaviour by convincing himself that it’s all religiously sanctioned.  Quickly taking a strong dislike to Solomon due to his interactions with fellow slave Patsy (Oscar Winner Lupita Nyong’o), an unwilling concubine to her master, Solomon must struggle to survive long enough to get word to his family of his predicament one way or another or die in servitude.

Steve McQueen brings this distressing tale of misery and human suffering to our screen with considerable aplomb, running the gamut from uncomfortable and often graphic moments of cruelty to rare glimpses of affirmation of hope. The film is beautifully shot, complimented by an immersive evocation of the period via authentic wardrobe and production design, with some exquisite – And occasionally confronting – Camerawork, particularly the uncomfortably long, silent take of Solomon’s dangling body during the lynching scene whilst his fellow slaves dismissively go about their activity in the plantation behind him and the gruesomely realistic whipping scene. 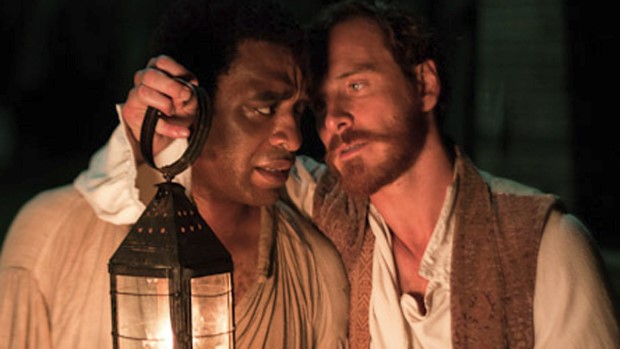 There are some areas where the film falls slightly short, such as in effectively portraying the passage of time from Solomon’s capture up until his release; McQueen seems content to simply use the greying of hair as an indication of aging rather than using any makeup. Another minor issue is the character of Tibeats, who veers perilously close to becoming a caricature of blind hatred at times.

These minor quibbles are quickly forgotten, however, once one considers the powerful performances by the cast, most notably Chiwetel Ejifor and Lupita Nyong’o, with more expressed by their subtle movements and facial expressions than many actors can manage with pages and pages of dialogue. You really feel for the plight of the character and the supporting cast are just as captivating to watch, especially Fassbender’s frenzied performance that offers a nice juxtaposition to Ejifor’s more thoughtful and considered approach. 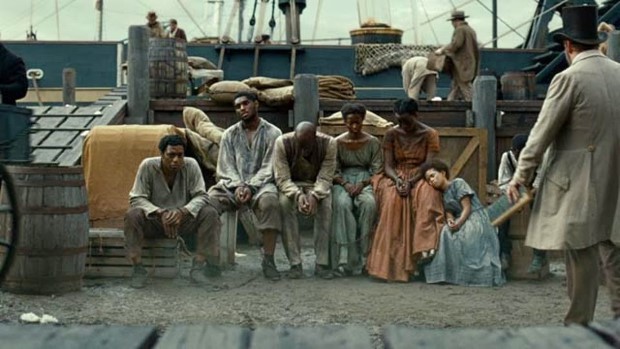 12 Years a Slave is a visceral and unsettling experience, inarguably one of the most brutal and shocking depictions of a extremely dark period of American History, yet the film’s final message is strangely uplifting as it explores the depths to which the human spirit can sink and how resilient the spirit can be when there’s even just the faintest glimmer of hope to hold onto.

Icon’s transfer takes top marks in both the image and audio departments, with no issues present in either area. The image is strong and clear and the audio is robust and mastered perfectly, providing an extremely immersive viewing experience. 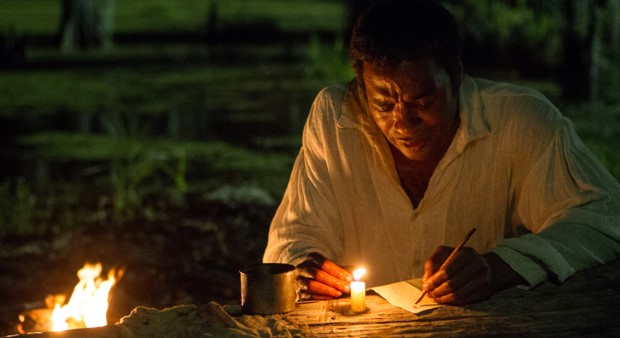 12 Years a Slave features a decent raft of supplemental features, including two brief featurettes looking alternately at the production crew behind the film and Hans Zimmer’s experience composing the soundtrack for the film. The real meat of the extras, however, comes in the two part “A Historical Portrait” featurette, where interviews with the cast and crew and an in depth look at the production process is interspersed by short readings from the book 12 Years a Slave by Chiwetel Ejiotor, a novel idea that serves to add a unique angle to what could have easily been just another straightforward ‘Making Of’ 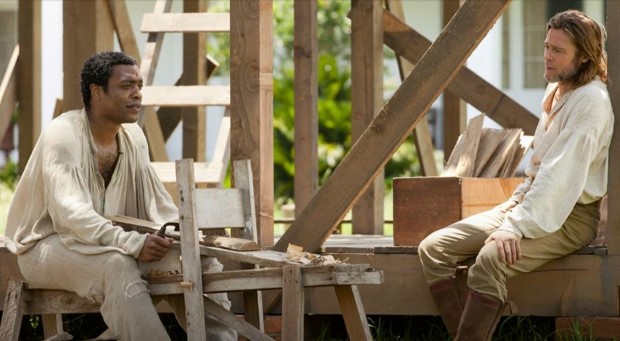 12 Years a Slave isn’t a pleasant viewing experience but it is a necessary one that paints an austere portrait of mankind’s capacity for cruelty. Don’t get me wrong: The film is an astounding achievement in both a technical and emotionally stirring sense, but the very bleakness of the source material makes for a harrowing and affecting experience that will stick with the viewer long after the credits roll and only the most masochistic among us will be compelled to watch it on a frequent basis, such is the tumultuous emotional journey the film takes you upon.

This stands as a testament to the effectiveness of Steve McQueen’s adaptation and the components it comprises, from the production design to the stupendous performances all around from the cast; often the film draws you in so much that it seems almost too bleak and realistic to bear… But bear it you will, if only to see the end result of the journey of Solomon Northup and reclaim some semblance of hope for humanity.