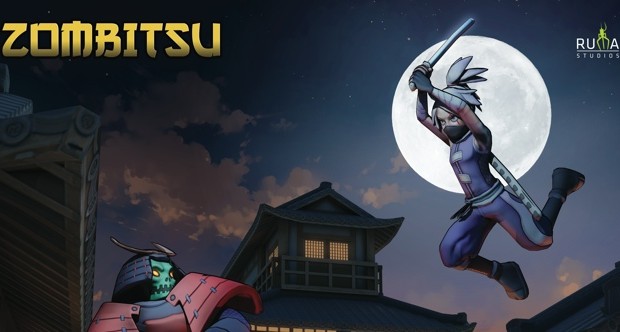 Summary: Zombitsu is a fairly standard mobile release, but far from being the worst. It’s too simple for adult gamers such as myself, but it’s a decently casual

Melbourne based developer Ruma Studios have released their latest mobile game Zombitsu, a third person arcade game available on both iOS and Android platforms. While it has some original ideas none of them are fully fleshed out, making it feel like a rehashed version of mobile games we’ve seen in the past. You control a nameless samurai warrior and guide him through levels filled with zombies, with the aim of killing as many as you can before you reach the end of a stage. At first Zombitsu looks fairly similar to Temple Run, as you have to avoid bottomless pits and walls in order to complete your tasks.

What Zombitsu does differently is introduce a free roam and combat system to this style of game. There is no set path towards the end of a stage, and you are free to jump on buildings to avoid enemies or face them head on with your sword. However no matter which path you take towards the end you will always end up at the same place; what would’ve been a cool mechanic was including secret areas that could only be accessed by taking certain paths in order to unlock new abilities. The combat is offensively basic; the one button attack system makes even the later level enemies ridiculously easy to deal with. Currency is scattered through each level in order for you to level up your health and strength. The higher the level, the higher the cost of course, and the game unsurprisingly includes in app purchases to help you reach these levels quicker. They’re not necessary, but it means you’re in for quite a grind if you want to fully equip your character.

The cell shaded art style is nothing revolutionary but it adds a stylish and appealing look to the game reminiscent of the Sly Cooper franchise, and the smooth 60 frames per second Zombitsu boasts is most welcome.

Zombitsu is a fairly standard mobile release, but far from being the worst. It’s too simple for adult gamers such as myself, but it’s a decently casual distraction.