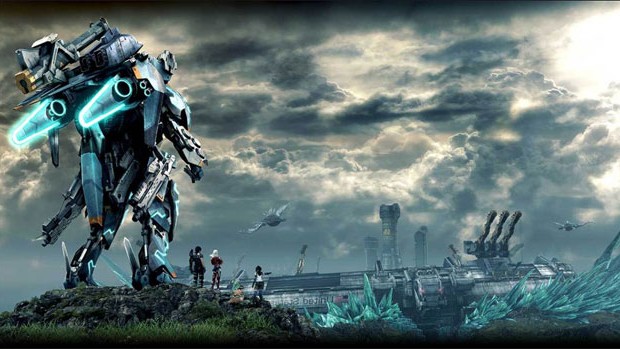 Summary: Massive open-world JRPG with astounding exploration but some pacing and storyline issues.

Xenoblade Chronicles X is an ambitious open-world role-playing game from Japanese developer Monolith Soft, known for their work on Xenosaga, Xenogears and the original Xenoblade Chronicles, the last one noted as a highly acclaimed swansong for the Wii. Their latest title fittingly marks the final exclusive game for Nintendo’s Wii U in 2015, and it’s easily the most impressive Japanese-developed RPG to release in years in terms of breadth of content, the sheer scale and scope of its large in-game world and its deviation from usual conventions. Returning fans of the Xeno series and interested newbies should take note before diving in: like some other open-world/RPG hybrid games this year, the gameplay focus and obsession in Xenoblade Chronicles X is exploration of its huge science-fiction setting, and environmental storytelling. Indeed, believe the hype – it’s absolutely monstrous in size, so big if you buy a retail copy, be prepared to devote 10GB of space on your HDD to installing data packs for better load times and increased texture quality. When it comes to exploration, X is unchallenged, but it lacks interesting and engaging quest content to keep the majority of players invested.

Xenoblade Chronicles X is set in 2056, two years after warring alien races battle above Earth and cause global destruction. Humanity built evacuation ships to escape the carnage, but only The White Whale from the United States manages to evade the crossfire and escape to another system. The ship is later shot down above the undocumented planet Mira by one of the races responsible for Earth’s destruction, forcing a crash landing among a wild untamed alien world full of both hostile and friendly native races. New Los Angeles is born out of the ship’s habitat pod, and the military organisation BLADE, which your character becomes an integral part of as its members defend NLA and recover other survivors from the Lifehold. The Lifehold is a part of the White Whale which contains the majority of humans still in statis. Players are put in the role of a mysterious amnesia-stricken survivor awoken from one of the thousands of stasis pods separated from the main contingent.

These opening moments and the breathtaking reveal of Mira and its exotic landscape is undeniably intriguing for science-fiction geeks like me who love some space drama in their RPG. If you ever had the power fantasy of flying around in a giant robot suit in a mysterious galaxy, X has you covered. On foot in giant mech robots referred to as Skells (the latter unlocked much later on) you will cover a ton of alien ground as you clear dangerous native lifeforms (referred to as indigens and tyrants), set up data probes to expand BLADE’s information systems and complete quests of varying designs – menial requests from NLA citizens, military orders from BLADE, and unmarked encounters in the wild during your travels.

Gameplay in X will be familiar to anyone who played Xenoblade Chronicles extensively. Don’t expect a typical turn-based JRPG; this is a real-time action-based battle system mirroring a single-player MMO. Players manually engage enemies of varying levels (displayed next to their person) scattered around the overworld for player and activate basic auto-attacks when in range. Special attacks are called arts and displayed on a palette on-screen; battle arts act as special attacks and abilities manually performed and have cooldown meters based on TP, and can be upgraded in effectiveness and cooldown efficiency upon defeating enemies and spending earned experience points on levelling up. Loot that can be equipped and used is also dropped upon defeating enemies.

Battles are fun, fast and more involved than many other JRPGs and varies depending on if you primarily use guns or melee weapons or a mixture of both types, but it also might not connect with those who aren’t big on its clear MMO structuring. As expected, progression is reliant on grind-heavy sessions and while fighting enemies out in the field randomly in itself is fun, much of the side content which implores you to hunt down certain dangerous creatures or gather their specific loot is uninspired busy-work – I would have preferred more creative scenarios. Mira’s widely varying environment types make the experience of fighting and running around (and later flying in your Skell) completing tasks and quests so rewarding and breathtaking. It arguably constitute the game’s greatest strength – getting players lost in its huge open-world, and it’s clear the developers spent a lot of time building this alien world into distinct continents; Primordia is full of lush grassy plains similar to those seen in Xenoblade Chronicles, while Oblivia is a harsh desert area to the East full of crashed alien ships and even harsher creatures. Noctilum is my personal favourite region – a freakish bioluminescent rainforest full of fascinating fauna.

When you’re out in the harsh wilderness or return to base in NLA (the only human base on the planet), you can visit several districts for main missions, armour and weaponry, side stories and affinity quests. All of these areas are neatly displayed in hexagonal segments on the Wii U’s gamepad, which acts an information hub, local map screen and helps you keep tabs on where probes are set up, fast travel points located, and so on. You can also switch the Gamepad’s use into a second screen, though the resolution quality is low and the already hard-to-see text even smaller, making the feature largely novel. While the interface is cool, the fact it displays a ‘survey’ percentage counter of how much you’ve discovered, collected and completed in said area into a numeric figure turns what should be a game focused on exploring the unknown and discovering things naturally into a literal checklist that we all fear and complain about in other major RPG titles or mainstream open-world games from Ubisoft.

Character customisation is relatively big in X. You are free to alter your protagonist’s name, gender, appearance and voice, with faces selected from an admittedly low number of presets and hair-styles, though there’s a decent amount of tattoos, face paint and colours to differentiate your character from the typical JRPG dough-eyed hero or heroine, including abnormal skin tones like blue and green or freaky looking white eyes. Armour and weapon choice is much more varied, with a ton of extremely awesome equipment to use on your character and the party which evoke the sci-fi feel – prototype scouters, sleek full-body steel suits, and intimidating futuristic firearms. When you later get your very own Skell to operate, your robot is also customisable to embed your own personality into your mechanical killing machine.

Visually, Xenoblade Chronicles X is stunning. The Wii U isn’t generally referred to as a technical powerhouse, but it’s clear Monolith Software is pushing the hardware to its limits with its game. The art-direction is colourful and pops out nicely against its incredibly diverse alien backdrops and vistas, and while I’m not a fan of the anime faces they’ve incorporated in several female NPCs, the majority of the cast’s designs and detail are superb. I can’t say the same about the rock/hip-hop/J-Pop hybrid soundtrack, though; your enjoyment will come down to personal taste; the generic tune that plays every time you visit New Los Angeles was so grating I dreaded returning to the hub. Going back to the story: voice choice for your protagonist only comes into play as a battle-cry; your character is silent during cutscenes, even when selecting one of two conversation options often thrown at you during key story moments, which is a bit of a downer when remembering how well the British localisation was handled in the first Chronicles. Many of the new characters in X such as Elma, Doug and Lao are competently voiced by the new American English cast, but are forced to act as voices for your protagonist who can’t speak for themselves, stunting the narrative growth a bit. Whether it’s a localisation issue or just the game’s style, cutscenes also feel overly long and dialogue not natural enough in flow – awkward pauses, silences and irritatingly slow scene transitions (all of which are not skippable) bring down what otherwise are, for the most part, interesting developments in the main storyline of protecting NLA.

As much as I loved the initial premise and the concept of a mysterious, unexplored alien world waiting for me to document its inhabitants, lands and secrets, I found the impressive scale largely doesn’t factor in an epic tale. Remember the unforgettable adventure experienced in the original Chronicles? With a great main cast and story driving everything forward? Forget it. Here, the story is scaled back to accommodate a silent player-created protagonist, limiting its scenarios, and Monolith Software’s new main obsession with providing players an expansive open-world to traverse has led to a weaker main narrative that melds into a series of tasks where the only thing you really need to do is explore. There’s no real in-depth interaction with NPCs outside of main story cutscenes, not much variation in how you approach quests and Mira feels unpopulated. It’s all dragged down even further by an over-serving of overbearing checklist- style tasks and collectathons in-between, repeating the same mistake past open-world titles have committed time and time again; huge worlds without interesting things to do beyond gawking at scenery and ticking off lists is busy-work, not a fun role-playing video game.

This is where Xenoblade Chronicles X seems to have failed to click for me, which is a shame, because its exploration-focus is undeniably attractive – it’s just there’s no powerful hook to bind it all together and keep me invested in moving forward, as much as I love grinding levels and taking my time discovering things.

Xenoblade Chronicles X isn’t a JRPG for everyone, but it’s definitely still a technical marvel and enjoyable game. Its open-world planet of Mira is undeniably massive, full of things to gawk at and engage with and beautiful artistic direction and environments to get lost in. The combat mechanics, while too MMO in structure for me, were engaging and tactical for the most part, and the high level of cosmetic customisation made my silent character and Skell feel like my own.

However, meaningful quest content, more involved role-playing choices and a better story than its predecessor are arguably lacking, and I wish these areas were stronger in conjunction with its excellent exploration emphasis. If you loved the gameplay from the first Xenoblade Chronicles and can look past a less involved main story, as well as invest 25+ hours before you even acquire basic gameplay mechanics (Overdrive, Skells), X will definitely resonate with you more in the long-run than it did with me.