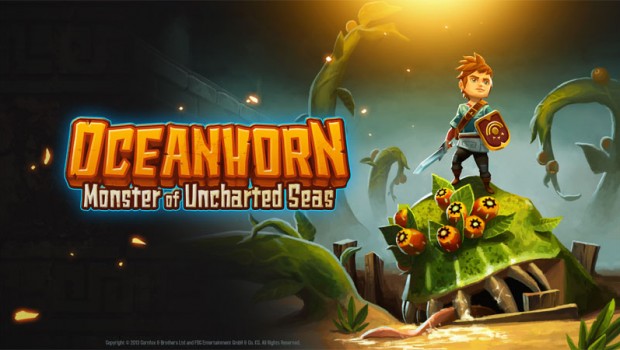 Summary: If there is only one game you buy all year than Oceanhorn should be it, especially if you love those classic Nintendo adventure games.

Oceanhorn Monsters of the Uncharted certainly came out of nowhere for me and after playing this game constantly for the last week, I’ve madly fallen in love with it because this is as close as iOS users will get to ever playing The Legend of Zelda on their Apple products. Not only does this game look like Zelda but it is also feels like Zelda and more importantly, the controls are truly perfect on both the iPhone and iPad. The title also has a great story behind it about a young boy, a sword and his shield. Okay… it is a Zelda rip-off in some aspects! The hero of Oceanhorn is a young boy whose father has gone missing as he went off to face the dreaded Oceanhorn. Unfortunately the dark energy that is released by the Oceanhorn has contaminated the lands and it is up to this boy to save the kingdom of Arcadia. The first level of the game serves as a tutorial as you must find your fathers shield, sword and your mother’s magical necklace in order for your adventure to begin. Once you have these items, you can then battle your way through the countless enemies that you face where you also learn that you must collect the ancient symbols of Earth, Ocean and Sol that will give you the powers needed to defeat Oceanhorn.

Although the game is quite reminiscent of The Legend of Zelda, the game feels more like a Japanese RPG opposed to the relatively simplistic nature of Zelda and this works extremely well on the iOS, especially with its intuitive touch screen controls. Just like a certain Zelda game, you must explore the islands where you live as you sail and explore on foot. At its core, the game is a dungeon crawler but there are enough side quests, hidden treasures to be found and other fun that keeps you quite captivated while you play. It also has a perfect save system and more importantly a great inclusion of save points should you die in combat. Combat works well in Oceanhorn and even though you have one button to attack, you also have a shield button which works extremely well in conjunction. As you defeat enemies, you are awarded experience which can then be used to level up in order to unlock new bonuses for your character. The game even contains a mini-map should you get lost and the boss battles are quite entertaining and fortunately with no controller rage as each boss has a certain weakness. Apart from your sword, you can pick up things in the environment such as pots to throw at enemies or stones to place on levers, including ranged magical attacked plus bombs and arrows! Swapping between weapons is done through the menu which is well laid out. Apart from combat, there’s lots of puzzles to be found and my only gripe is that most are a little too easy. I also enjoyed the sailing areas as well which felt extremely peaceful and a great break from combat. Oceanhorn is truly an amazing game on the iOS. Graphically, this game  looks like Zelda The Wind Waker and I’m sure its developers were aiming for this look. On both the iPhone and iPad, the game looks spectacular, especially the water effects and amazing lighting. I also love the character animations and the simplistic art style used to create the interactive gaming environments. This is easily one of the best looking titles on iOS, especially the use of its 3D isometric view plus its great special effects and perfect frame rate. To compliment these wonderful graphics, the game does feature some excellent voice acting and a beautiful soundtrack by Nobuo Uematsu and Kenji that is extremely reminiscent of Final Fantasy X which is another win in our books.

Apart from the main quest, the title is littered with side quests and even though I did not complete all these missions, I did successfully complete the game in around 12 hours but I’ll definitely be revisiting the world of Oceanhorn again. Sure it’s a slight rip-off of Zelda but imitation is the purest form of flattery and this game gives iOS users a fun game that works on all levels. If there is only one game you buy all year than Oceanhorn should be it, especially if you love those classic Nintendo titles.