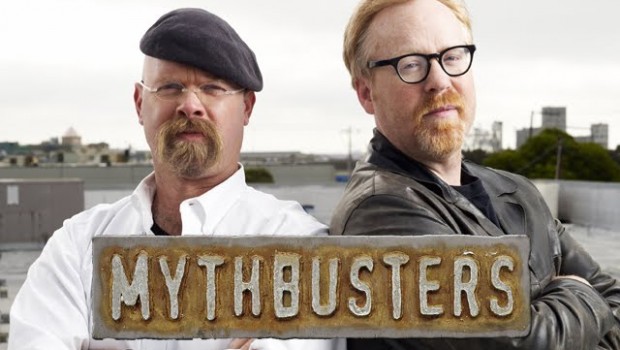 Summary: Mythbusters Season 8 Collection 1 proves that the team haven't lost their mojo and create some wonderful scientific experiments and stunts to confirm or bust a variety of myths from around the globe.

This epic Mythbusters release features 16 episodes from Season 8 of this amazing series as the gang attempts to either debunk or prove a variety of “myths”. Best of all, this is the 10th anniversary of Mythbusters and you can rest assured that the team will have a party of a time as they attempt the impossible. With that said, the protagonists of Mythbusters are Adam and Jamie who are also joined by Kari, Tory and Grant who as scientifically as possible test out a variety of myths. Before we jump into some of the episodes themselves, this collection features 4 discs of episodes and even includes a bonus 5th disc with extra scenes and after show specials. The highlight of this collection is the Breaking Bad Special (episode 209) and one of the most requested myths sent into Mythbusters that involves the legendary Titanic and director James Cameron.  Of course, it’s whether Jack and Rose could have survived at the end of this movie?

Do they? You’ll need to watch the episode! The Breaking Bad Special guest stars series creator Vince Gilligan and actor Aaron Paul as they join Adam and Jamie in mixing a variety of ingredients together (like the show) to produce some spectacular results such as whether a piece of solid mercury fulminate will explode on impact. The most disturbing part of this episode is whether a tub of hydrofluoric acid can totally dissolve a human body and then eat through the tub itself.

However with 16 episodes packed with a variety of myths to bust of confirm, it’s actually quite difficult to pick a favourite episode.  For example, the team attempt to make a homemade parachute with only limited items and time to create some very amusing stunts for the loveable buster who goes crashing towards Earth. Given that, Mythbusters also test some real-world “facts” that may benefit mankind such as hypermiling which may actually increase the fuel efficiency of vehicles.

Once again to find out if it’s true, you will need to watch the episode

Mythbusters Season 8 Collection 1 proves that the team haven’t lost their mojo and create some wonderful scientific experiments and stunts to confirm or bust a variety of myths from around the globe. Running at over 900 minutes, this collection will keep you busy for a considerable amount of time and best of all, it’s quite affordably priced at $29.95AUD (December 2014).

It’s funny, it’s scary and best of all, the entire team is quite contagious which really draws you in!