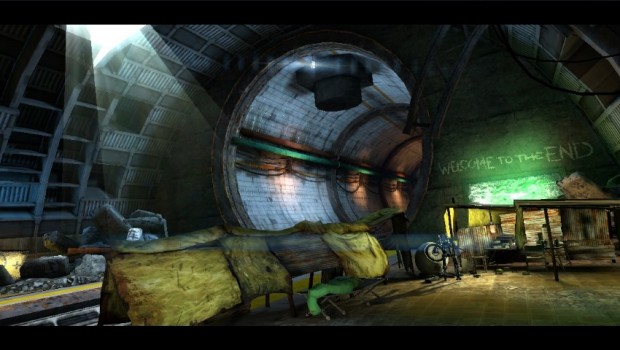 Summary: Epoch 2 is a very well made game on the iOS that is easily one of the most impressive out there. Best of all, the controls are very sturdy

Epoch 2 is developed by Uppercuts games and uses the powerful Unreal Engine which returns players to this futuristic world where players control Epoch in this third person shooter. Although not a free moving third person shooter, the developers have created a great shoot and cover game using the aforementioned popular game engine but more importantly, it has been fine tuned for the iOS. In terms of story, Epoch 2 continues from the previous game which has Epoch going between two warring robot armies, the Ometatroniks and the Alphetekk in order to save the beautiful princess Amelia who he was programmed to protect. Unfortunately for Epoch, the stakes are high and it’s up to the player to successfully navigate Epoch through the war in order to rescue Amelia. It’s going to be difficult.

Before jumping into the game, the first thing that you notice about the game are the amazing graphics that look visually impressive on the iPad Mini with Retina Display. The graphics are almost on par with gaming consoles such as the PlayStation 3 and XBox 360. The backgrounds are highly detailed and the various robots that you fight have some great texture details with some great animation to match. Add in realistic lighting and special effects and you could almost be forgiven in thinking that this is a high end console game. The premise behind Epoch is simple which requires the player to embark on a variety of levels as they employ some strong cover based mechanics. The first level of the game serves as a tutorial which teaches the player how to control Epoch . For example, to shoot, you simply tap on an enemy and to duck for cover, you swipe down. You can also jump up by swiping up which allows you to attack from air or move to another area.

Apart from your standard gun, Epoch has access to other weaponry which is needed for boss battles like grenades and rockets. To access these, you simple tap on these icons but you do have a limited amount. As you progress, you are awarded upgrades which makes your robot more powerful and is a must thing to do. Without it, touch screen rage could ensue.

The controls are very tight on the iOs and it’s far than superior than games with virtual thumb sticks as the limited movement works well, especially when used with the accuracy of selecting targets and items. Boss battles are sometimes tricky, specifically when you need to move and it does take some time in becoming a master with the controls. Without spoiling the game, there are some truly epic moments in the game, including enemies. Epoch 2 is a very well made game on the iOS that is easily one of the most impressive out there. Best of all, the controls are very sturdy and the graphics are to die for. It is a little short but overall it’s a must have game to see the capabilities of the iPad Air and iPad Mini with Retina Display.