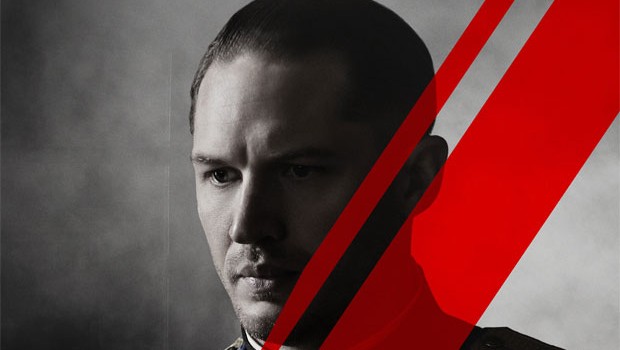 Directed by Daniel Espinoza, from a screenplay by Richard Price, based on Tom Smith’s book of the same name, Child 44 is a grey, bleak movie that despite the potential of the storyline, never really achieves lift off.

Set in Stalin’s USSR in 1953, the movie begins with a series of flashbacks that establish Tom Hardy’s character of Leo Demidov. Orphaned in the Ukraine famine in the 1930s, a survivor of the assault on Berlin in 1945, Demidov works as an agent of the Ministry of State Security, an agency that performed the role of a secret police. The decision to start with flashbacks severely impedes the ability of the film to gather momentum. These jumps are later mirrored during the movie as scenes fail to emerge organically, instead they seem to leapfrom one set piece to another. Granted, Price had to condense a thick book into a two hour script, but some of his choices make the movie a jarring experience.

The heart of the movie lies in the interchange between Demidov’s duties as a secret policeman, responsible for rounding up enemies of the state and ensuring they confess to the crimes they are alleged to have committed, no matter how fanciful. Torture is routine, and results in lists of names being drawn up of people whose only crime is to be known by a suspect desperate to end his suffering before the inevitable bullet in the back of the head. As a part of that ghastly machinery, Demidov is complicit in condemning the innocent as much as the guilty. For ideological reasons, the Soviet regime believes that murders are impossible in a Communist society; that they are a product of the corruption inherent in the capitalist system. For that reason, the death of the son of one of Demidov’s colleagues is put down as an accident, and not a murder. This is the moment the plot really begins.

Demidov, however, decides to investigate further instead of following the dictates of his commander. In doing so, he leaves himself and his wife, Raisa (Noomi Rapace) open to accusations by an ambitious rival within the MGB, Vasili Nikitin (Joel Kinnaman) of disloyalty to the state. So charged, the Demidov’s lose their comfortable apartment, and are sent into internal exile to the town of Volsk. There, Raisa, a trained teacher, is forced to become the janitor of a school, while Demidov is demoted to become a driver for his new commander, General Nesterov (Gary Oldman). It is at this new posting that Demidov comes across more evidence that the murder of the child in Moscow isn’t an isolated event; there are more dead children up and down the train lines radiating out from Moscow. Child 44 is grim movie shot in a grim fashion. The colours are muted, much like the lives led by the populace under Stalin’s rule. The State exists to keep its citizens down, to follow them, listen in on them, and if necessary crush them. Fear is the overriding factor in the lives of everyone. Fear that the regime, or its agents, may turn their awful attention on you, destroying your lives. Demidov is part of this machinery, hunting men and women who are disloyal (whether true or not) to the State. He recognises the limits of the State, but until he becomes obsessed with finding the killer of the children, he is prepared to go along to survive.

The main problem with the movie is the need to compress the novel into a 137 minute movie. The plot chops and changes at odd moments and events occur in ways that leave the viewer confused. One moment Demidov and his wife are to be executed, the next they’re packed onto a train and sent away, without little explanation. Events occur, deductions are made, that aren’t adequately explained, or even grow organically out of the script. That said, the performances are fair to middling. Tom Brady broods like few in the movie industry today, and his performance reflects the sombre era this film is set in. Oldman is wasted in a role that asks little of him except to frown and shout. Kinnaman as the sociopathic Nikitin gives the best performance, which gives him a chance to perform outside the narrow range the material requires of the other actors. Forcing non-Russian actors to adopt Russian accented English is probably a mistake – audiences are smart enough to realise that complete fidelity to the setting isn’t required to enjoy the experience.

The visuals are excellent – the city Demidov and his wife are exiled to has echoes of Tolkien’s Mordor – all ash and slag, appearing in a cloud of smoke, an industrial hellhole where those discarded by the State are sent to spend the rest of their lives scrounging in the dirt.

Overall, Child 44 fails because of the failings of the script. As a thriller its flaccid, because of the way the plot lurches along. It isn’t much of a police procedural as the investigative portion of who the killer is left far to late to generate any sort of excitement. As a meditation on the grimness of the times it is, however, very excellent, leaving the viewer to ponder how they would live under such constant surveillance and suspicion.

Child 44 is a drab visual experience, matching the tone and era perfectly. The transfer is perfectly realised, and there is a sort of beauty to the relentless drabness on show.

The audio mix is as you would expect from a modern production. Dialogue is clear and crisp, and all the audio channels are fully utilised to best effect.

In terms of extras, there is a short documentary, Reflections of History, where the cast and crew reflect on realising the era. As usual, this just skims the surface of the topic, and is disposable.