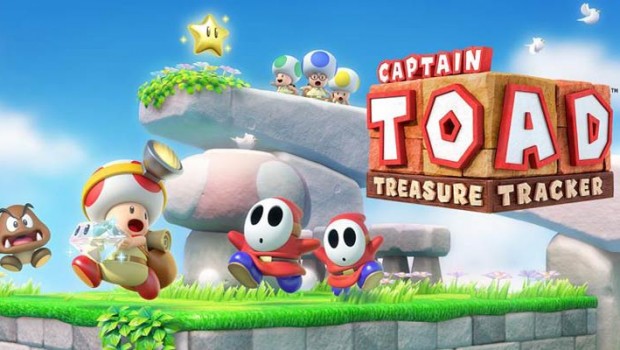 Summary: Toad has to do things a little differently when he’s put into the spotlight for the very first time

My first impression for Captain Toad: Treasure Tracker was sceptical. As a smaller-scale prequel to Super Mario 3D World, it left me feeling as if it were Nintendo’s way of stalling for time before they produced a fully immersive and grand Mario experience to finally out-do the Super Mario Galaxy games. While that Mario game still hasn’t come, I’ve found that my first impressions were wrong about Captain Toad. As a game that boasts original gameplay, interesting puzzles and high-quality level design, Captain Toad: Treasure Tracker is possibly the best Mario game yet this generation. The gameplay in Captain Toad is quite simple. Most of the levels are designed in a cubic fashion and its Captain Toad’s goal to find gems and collect Power Stars. His treasure tracking friend Toadette was kidnapped by a giant bird who also has an affinity for treasure, and Toad’s left with saving the damsel in distress. The big mix-up that sets this game apart from Mario’s adventures is that you can’t jump. Mario’s go-to move and our basic instincts are no longer. Instead you navigate by climbing ladders, using pipes, and dropping down from higher ledges. Even standard enemies like Goombas pose a serious threat, and all you can do is stay out of their way. Each level is a well-designed puzzle; rich with beautiful aesthetics and secrets packed everywhere. They are short levels, taking about a minute to complete, but they are indeed sweet. I enjoyed how this game acted as a counterpart to Super Mario 3D World, sharing some assets and having a linked story that made both games feel like a more complete package. While the game is based on small sub-levels that were first introduced in Super Mario 3D World, there is a lot more variety in gameplay along with a ton of elements that were never used for Captain Toad’s levels before, like the Double Cherry power-up among other things. Subtle little things between these two games like Captain Toad’s cameo appearances in the main levels of Super Mario 3D World are referenced in the bonus content that you’ll unlock along the way. Captain Toad: Treasure Tracker also pays homage to Toad’s past, reviving some long forgotten mechanics from Super Mario Bros. 2, such as pulling up vegetables from the ground and finding keys to unlock doors.

The game does have a few shortcomings. The brief levels Captain Toad: Treasure Tracker in accordance with the Mario standard of about 80 levels per game means that this is indeed a short expedition, especially when the credits start rolling after only beating level 18- which takes under an hour of gameplay even for the hardcore scavengers. As it turns out, this is only one episode of the game, with two more and a bonus set of levels to come. The second and third episodes provide you with many more levels but it does seem to retread the same ground from the first episode. In a twist of plot, you’ll also be able to play as Toadette in the attempt to save Captain Toad. But it feels like you’re playing episode one with different levels. Captain Toad repeats the same boss battles more than once, and there are only two unique bosses in the whole game. I also have to question the decision behind making the game with no other controller options than the Game Pad. The use of the gyroscope to act as a camera is flawed with the Game Pad. Unless you have an office chair in your living room or are fine with holding the Game Pad at bizarre and uncomfortable angles you won’t be able to use it. Luckily the right control stick is a much more efficient way of controlling the camera. As a person who enjoys experiencing a sense of interconnectedness in my games I find the level select menu a disappointing choice over a hub world where you’re free to play around aimlessly in your spare time. Captain Toad’s graphics are on par with Super Mario 3D World, which looks nice – but it suffers from a glossy effect that makes everything look porcelain. That aside, Captain Toad and his friends look downright adorable. The soundtrack in this game mostly uses cover versions of tracks that feature in 3D World in a much more simplistic manner. While it’s nothing special, it provides some fitting ambience to the environments. Captain Toad is a fun adventure and an enjoyable little break from Mario’s typical adventures. Will it hold the world over until the next big Mario game? Definitely. It’s easy enough for anyone to complete but complex enough to feel kind of smart playing through it. It’s a nice change to Mario gameplay without making it unrecognizable.