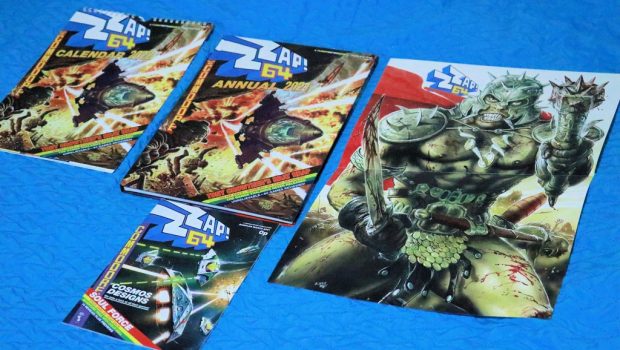 Summary: If you are a fan of the Commodore 64 you would have either gotten this already or are considering it. Other fans of the 8-bit scene should definitely get it.

After ordering the CRASH Annual off the Kickstarter while looking for the previous year’s issue of the ZZAP!64 Annual I eventually ended up ordering this one. During 2020 I did not buy very much from overseas at all due to postage costs and such long posting times but I did support quite a few Kickstarters that are now arriving during the course of 2021.

This project was originally launched as a Kickstarter to lock-in pre-orders and for the bigger fans to get some extra goodies to go along with it. As with the CRASH Annual I also got a poster, sampler issue of the A5 bi-monthly ZZAP!64 that is being published via the Patreon and a calendar with Oliver Frey art.

Although I was a big fan of the Commodore 64 growing up, our family never got one due to the cost as we had the Atari 2600 at home for 9 years until my brother got a Master System and I got a Megadrive in late 1991.

I would always go to various friends who had one including one where we ended up putting the power adaptor on the trampoline with a bag of frozen peas as he had heard you needed to “cool it down” after a couple of hours. I think maybe his parents told him that to get him to go outside.

For all the people who complain about system “exclusives” these days at least you did not have to live through the era where there could be at least six different versions of a game on different 8-bit and 16-bit computers by different developers. There were a lot arcade conversions then so they had the licencing sorted out for the home releases.

I still remember the movie tie-in feature I had from a copy of the original ZZAP!64 with the line “always go for a strong silent type who is good at punching people in the face” and had the tale about a company passing on the Biggles movie licence that ended up being a dud.

Unlike a lot of retro publications they actually talk about and review new games and not just the same things over and over. The games have been released over the past few years.

The sections in the magazine are as follows:

Chronicles of the White Wizard

The Games that Weren’t (feature article on this book)

In His Own Words – Andrew Braybrook

Oh, my days…and mine as well (Steve Shields, Ian Osbourne)

Other columns from feature writers:

The Future was 8-bit

This magazine has the feel of the “bumper Christmas issue” that magazines used to put out each December and due to sea mail I would not get to read until May the next year. I did end up reading the whole magazine and it ended up taking me a couple of weeks to read in bits. I remember sitting and reading a whole magazine in a few hours back in the day but we did not have social media back in the 1990s.

If you are into the retro scene in particular the UK 8bit scene which has its own personalities and feel to it you will be at home here as feature articles written by people who are active in it talking about their own projects.

Unlike magazines back in the day, while there are some ads they are a lot more targeted and this magazine is packed with reviews often going from one page to the other and some sharing pages. The games with the higher scores get a double page spread at least.

I was interested to hear about Vandalism News, a C64 disk-based magazine still run from Australia as I am into zines and still collect them from various people.

The Craptastic Reset C64 competition reviews make up most of the 60 games reviewed in the magazine. Despite the name they are not bad, the games were limited to fit in 4K and some were able to do a lot in a small space.

There were a few hardware sections as there are various hardware aspects to the scene these days with the Future Was 8-bit and the ZZAP!-Tech sections covering these.

Music played a big part of the original C64’s success with some famously bad games being released just so they could use Rod Hubbard on them. I ended up backing part 2 of the 8-bit Symphony project but recording in Prague was held up by COVID. There is an album review of the SID Chip Club and reader’s charts of their favourite SID tracks.

If you were a fan of the Commodore 64 back in the day and ZZAP!64 magazine you would no doubt at least heard of this new magazine already. If you have not and are a fan of the retro scene and in particular the UK 8-bit game developers of the 1980s and 1990s then you owe it to yourself to get this magazine.

While I am not sure I will be going on their Patreon for the bi-monthly issues, I will order the 2022 annual when it is pitched during the year this year to see what else has arrived on the scene.