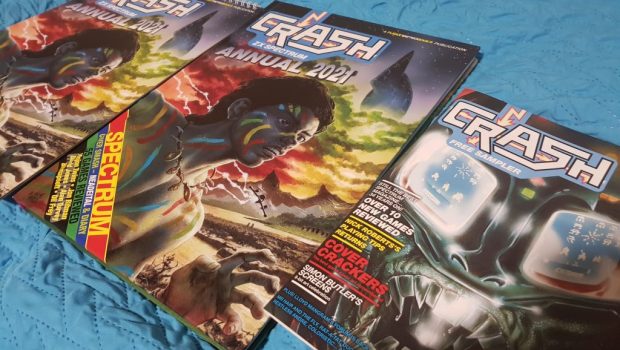 Summary: One for the 8-bit retro fans including people who read the UK published magazines back in the day and to show people who think the retro scene is just about mining nostalgia.

A must-buy for 8bit retro fans

While I never remember seeing the ZX Spectrum advertised in Australia back in the 1980s, it must have had people who had it as the CRASH magazine was being sold here and I knew people who would get it to read.

I got this from the Kickstarter back in December, but have been savouring it so didn’t want to read it all at once. There is a ZZAP 64 2021 Annual coming out for the Commodore 64 that will hopefully be arriving soon.

Having a hard cover is good if you want to carry it around in your bag as it won’t get bashed up as much as a magazine would and you can pick it up and put it down to read over however long you want.

With the ZX Spectrum Next being released and becoming popular in the retro scene, this magazine has what a lot of the other retro gaming titles do not, actual new games. There is only so many times you can talk about the same old games or put them into compilations and expect people to pay for them again. They let programmers redo some older classics on a system with new capabilities and just release them for cheap or free and you don’t need to have a large team or millions of dollars.

The sections that were in the original magazine return, such as Adventure Trail, which is specifically for the adventure games that used to be popular on the platform back in the day.

There is a section on the new ZX Spectrum Next and reviews of the new games that are still coming out for it. The original hardware is very old by now so it is getting a lot harder to get the original software to run. On the new machine the original games run a lot faster and they can improve them in ways they could not with the limitations.

Along with the reviews there are some interesting sections such as on the Arcade Game Designer software, some reviews of games made with it, an in-depth game development diary on the game NEADEITAL, the games time forgot on some not as well-known games and some of the best bits of the old magazines.

All the regular sections are back but the letters seem like they are made up for this issue which is meant to be the joke that a lot of the letters were back in the day.

The company has paid for the CRASH brand name so the future for this publication is assured, they also have a quarterly A5 mini edition which you can buy separately or get it by subscribing through their Patreon. I got a copy from being a Kickstarter backer and it is a good way to preview the book before committing to one of the big editions.

I also got a bonus calendar and A3 double-sided poster with Oliver Frey artwork so the artwork is quite good. There is an interview with the artist in the book with some insights into is work and some things I had not heard before. Oliver Frey’s artwork was well known on the cover of CRASH in the 1980s.

If you are a fan of the ZX Spectrum or retro games from this era I would recommend getting this book. It is also good to have to show people who think retro gaming is just about playing the same games over and over. Makes a great edition to the collection to your bookshelf alongside titles like the Art of Point and Click Adventure Games or the Games That Weren’t.