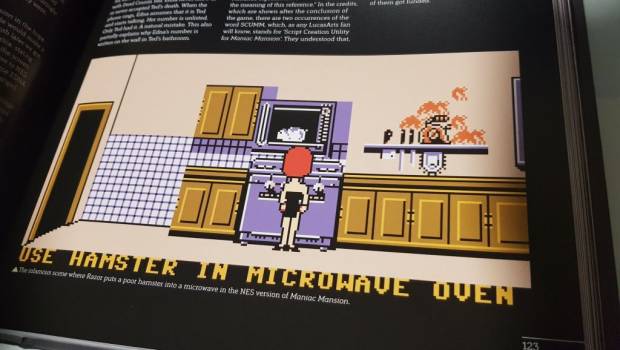 Summary: A great summary of the point and click adventure genre over the years, maybe don't try and read all the interviews at once though.

I had heard of this before from several retro gamers online and as I have fond memories of playing point and click adventure games when some of the bigger ones originally came out in the early 1990s I was looking forward to it.

The book is a combination of traditional art book and interviews from the people who worked on the games. As other people have mentioned I am not sure they really need to have people from the same studios who worked on the same games as they give similar answers. I would have liked to see a credit on who gave what interview as it said Julian Rignall (C+VG, Mean Machines) was one of the people giving the interviews but I didn’t know which one he did.

I did learn something from the interviews including Stephen Speilberg being a play tester on Indiana Jones and the Last Crusade and there was an option to punch Hitler in the game, the only time you could “die” in the game.

.
While the focus of the games are on the bigger titles from Lucasfilm and Sierra, there are some from smaller studios covered. Ken Williams says that games were expensive to distribute back in the times when they had to ship a big box copy.

There is a great forward Gary Whitta, former editor of PC Gamer and a short history of the point and click adventure genre with a glossary of terms. If you are already a fan of these games this is easy enough to skip.

The way this book is designed is that to be read all the way through, maybe just read the parts you are interested in and look and the screen captures of the games as there are a lot of them.

I have tried to do screen captures before and they are very difficult to do properly and get the colours right as they never look the same as they do on the original hardware. Fans of pixel art should look this title up for their collection as there are a lot pages that showcase the art from the games including the backgrounds and some concept art.

The evolution of point and click adventure games showcased the latest and greatest technology for the times as the bigger Sierra and Lucasfilm titles went from basic graphics, to 256 colour VGA graphics and sound effects and then full music soundtracks on CD and voice acting. The more recent games have returned to the retro aesthetic as people remember playing the older style games and wanted to feel like they did when they first played them.

Kickstarter is mentioned a lot as they do get into DoubleFine’s success with the platform but there are also projects that did not raise all the money that they needed from it or where not successful. I cannot really imagine another Police Quest game given the events of recent times for instance.

The book is very well presented and very large. Only the Games that Weren’t is bigger and heavier. I like the way that the screenshots are used so there are not long slabs of text. It is organised by year and the interviews are listed in the index so you can either look through to see games from a particular year or just read the interviews of people you want to find more about and come back to the others later.

This is a coffee table book for gamers and people interested in storytelling in games and the evolution of the gaming industry in general well worth a pick up if you want something definitive.