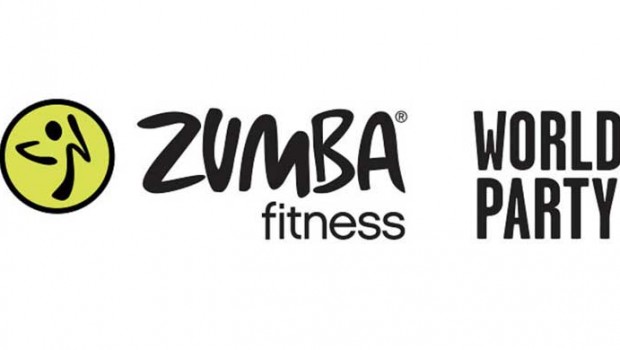 Summary: If you enjoy Zumba and want to exercise in the comfort of your own home or you're too embarrassed to join a class, than Zumba Fitness World Party ticks all the right boxes.

The Zumba craze is still around and the latest addition to the world of consoles is Zumba Fitness World Party which at present is the closest both gamers and casual gamers will get to participating in their very own Zumba class. As the game uses the Kinect, Zumba Fitness World Party is a controller-less exercise game which means the XBox 360 monitors your body in relation to the tasks you are required to achieve.

The end result is quite an intensive exercise regime that moves to the Zumba beat. In relation to the beat, the game contains some awesome songs from Lady Ga Ga, Marc Anthony and Ziggly Marley. The songs will really add to the Zumba experience, especially with its dance-like beat and once you hear it, you can’t help but dance. 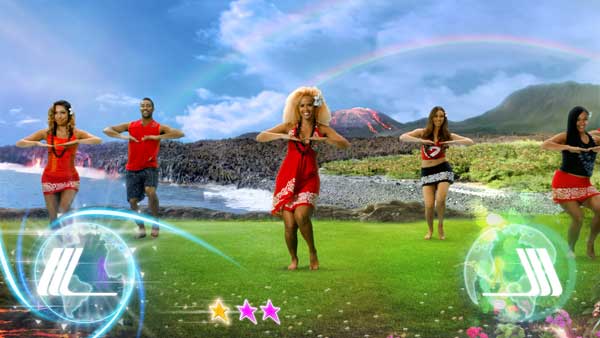 Compared to previous instalments, Zumba Fitness World Party now uses real video footage of the Zumba instructors which definitely enhances the overall exercise experience of this title. Like I said earlier, it’s almost like you are part of a Zumba class but the only drawback is that you need quite a bit of space to move but this is due to the limitations of the Kinect itself.

Each of the various songs have particular routines which must be completed and if you follow these routines, you will feel your muscles ache the next day. Of course and as mentioned, Zumba is all about the music and the great set list in this title really helps get your endorphines flowing. The game also scores you on how well you perform the moves via its star system and there are 30 international dance styles to partake in. 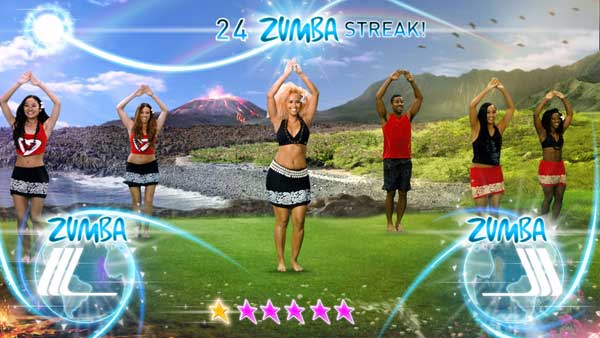 However when it comes to workouts, Zumba Fitness World Party really makes you sweat thanks to the various dance styles included in this release. Opposed to previous games, there’s some great new moves like Reggaeton, Irish Step and our favourite, the Girlie Funk as you dance and exercise yourself across the globe to places like Hawaii and even India.

For those that want something of a career mode, the game supports a World Tour which focuses on a particular region of the world. By successfully completing each region, you are awarded points which then allows you to progress to the next area. There are other modes as well such as multiplayer (this can be tricky in enclosed areas) and even classes. It’s great that game monitors your performance with weekly reports and even calorie tracking. 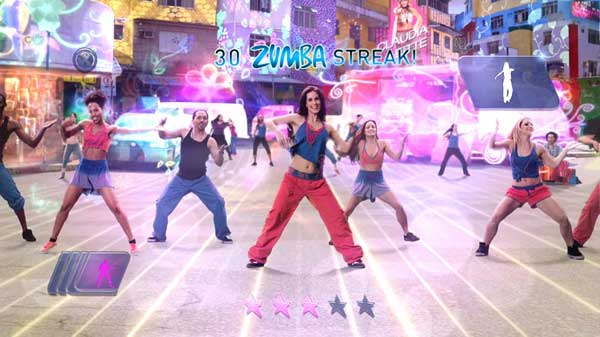 Graphically, the game looks good on the XBox 360, especially the Zumba inspired environments and of course real footage of instructors . The layout and menu system is set out well that makes navigating the title easy, especially for non-gamers. On the 360, the game looks impressive and even though the instructors are on a fake background, it actually looks quite good. Audio as mentioned is awesome! 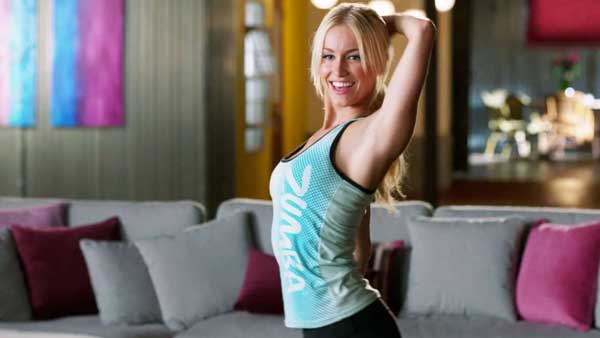 If you enjoy Zumba and want to exercise in the comfort of your own home or you’re too embarrassed to join a class, than Zumba Fitness World Party ticks all the right boxes. The gameplay works well and although Kinect is quite forgiving, it does a decent enough job at monitoring the player. The only draw back is that with most Kinect games, you do need the space to successfully play this game and more importantly exercise.

Nonetheless, it does what it should… increase your heart rate and cull those calories! Check it out! 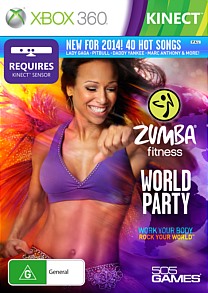 • Move to 30+ dance styles from around the world including Salsa, Hip-Hop, Tahitian, Calypso, Bollywood, Cumbia, Reggaeton and Irish Step, plus new additions like Plena, Blues, Capoeira and Girly Funk.

• Explore the globe in the new World Tour mode that unlocks songs from seven global destinations as you progress, exposing you to authentic customs, local rhythms and native dance styles.

• New visual presentation makes you feel like you’re traveling the world for a global jam with your favorite celebrity Zumba instructors!