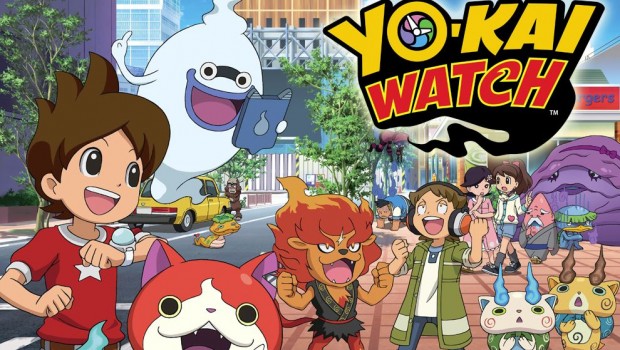 October 2, 2015 – Yo-kai Watch is a multi-billion dollar franchise and cultural sensation in Japan, and from December 5, Australia and New Zealand will get their chance to experience the excitement when the massively popular role-playing game YO-KAI WATCH™ launches for Nintendo 3DS. Based on an original concept from top Japanese entertainment company LEVEL-5, Inc., Nintendo Australia, Hasbro and Channel 9’s GO! channel have teamed up to bring the Japanese phenomenon to local shores.

But what is a Yo-kai anyway? Is it a spirit? A monster? A ghost? Nope – a Yo-kai is … well, it’s just a Yo-kai! You might not see them because they’re invisible, but they’re all around you every day. And they’re often mischievous, mysterious pranksters who like to make trouble for you. Lose your homework, can’t keep a secret or find yourself running late to everything? Yo-kai probably made you do it. The Yo-kai are based on common concerns kids have, and by confronting those concerns, kids can learn to overcome them.

When YO-KAI WATCH launches for Nintendo 3DS on December 5, you can explore the world using your Yo-kai Watch to discover more than 200 Yo-kai, then befriend them and turn them into a team to battle other Yo-kai. Each Yo-kai has its own unique skills and strengths, so you must use them to challenge troublemaking Yo-kai and help people in the game solve their daily problems. In Japan, the three YO-KAI WATCH 2 games accounted for three of the six best-selling console and hand-held games in Japan for 2014.

In December, Channel 9’s GO! channel will debut the animated comedy series YO-KAI WATCH. The show follows the hilarious misadventures of an average boy and his involvement with the mischievous Yo-kai all around him. Our young hero obtains a special watch, empowering him to discover and summon Yo-kai, befriend them and then work together to solve everyday problems … problems that are often caused by other troublemaking Yo-kai!

The fun continues in Q1 2016 when Hasbro will introduce innovative play experiences for the Yo-kai Watch franchise, with the line set to include toys centred around collectible medals, each representing a unique Yo-kai.

In Japan, the TV program has been the top-rated animated show on TV TOKYO for kids 4-12 years old. Within 18 months since launch, the franchise has sold more than USD $2 billion in retail merchandise, and more than 8 million units of Nintendo 3DS video games have been sold in Japan alone.

The cultural sensation comes to Australia and New Zealand when YO-KAI WATCH launches for Nintendo 3DS on December 5.