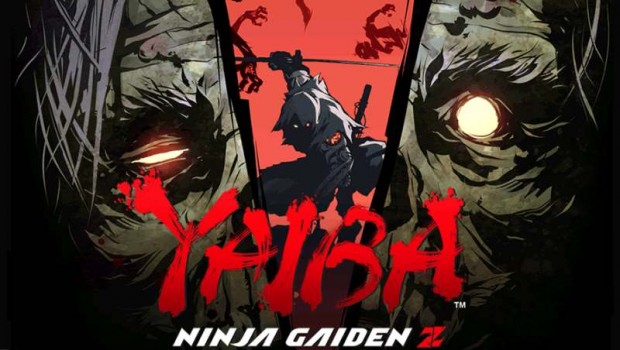 Summary: Yaiba: Ninja Gaiden Z delivers in some respects but fails on others.

Yaiba: Ninja Gaiden Z is a very different Ninja Gaiden game and developers Team Ninja have really twisted the premise, especially with the stylised graphics and of course inclusion of zombies plus cyborgs. Also, ninjas and zombies definitely go hand in hand and Team Ninja have really played on this concept, especially with the main protagonist. As a result, Yaiba basically looks like a comic book anti-hero come to life in this overtly gory and over the top third person action adventure game. Feel like ripping someone’s arms off and then using them as nunchucks? It’s possible in this game. 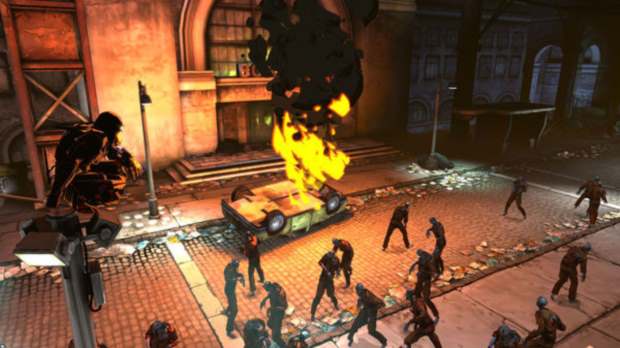 The story of Yaiba: Ninja Gaiden Z revolves around Yaiba Kamikaze who has been cleaved in two by Ryu Hayabusa in a truly spectacular fashion. However rather than let this warrior die, Rico Del Gonzo has the idea of placing Yaiba back together again by creating the world’s first cyborg Ninja thanks to the super and sexy scientist Miss Monday who would not feel out of place in a Men’s Magazine.

Brandishing his ninja sword and the mecha weapons in his cyborg arm, Yaiba is once again ready to protect the world from zombies! Unlike other Ninja Gaiden protagonists, Yaiba is probably the most amusing thanks to his cheesy one-liners that actually works with the stylised comic book graphics. He may be a pain in the rear but there’s something uniquely interestingly and likeable about him. However, once put back together, Yaiba must find the source of Project 72 which has turned thousands of humans into killer zombies and also find Ryu Hayabusa who was responsible for cleaving him in two. 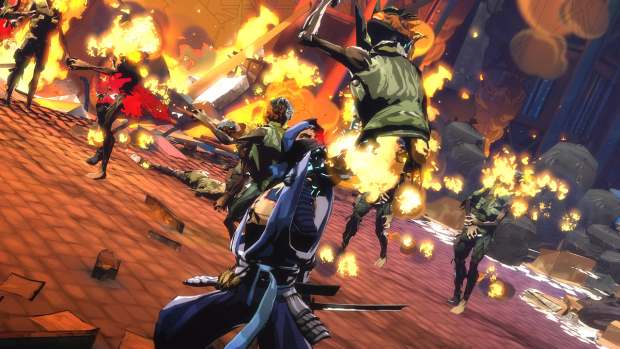 Unfortunately all that style does end when it comes to the gameplay. The gameplay behind Yaiba: Ninja Gaiden Z feels very stagnant and forced at times. It’s basically fight a group of enemies and engage in the occasional boss battle, followed by completing a rather tedious quick-time event. Enemy designs are varied like zombie brides to priests but at the end of the day, it does become a hack and slash with a lot of button mashing.

Fortunately the combat maneuvers that Yaiba has, helps spice things up which includes three main attacks that can then be stringed together with an impressive finishing or execution move. I did enjoy Yaiba’s cyborg arm, especially as you move from chainsaws to rocket punches that is quite fun stringing these different combos together. The flail attack is very useful for clearing weaker zombies and most enemies have a key to defeating them.

Enemies also range from traditional shuffling zombies to some really tricky ones who use a variety of powers on your character like electricity, bile and fire. Your character also has a type of cyborg vision that assists in not only pointing you in the right direction but helps you find the various collectibles littered through the gaming environment. Add in a leveling system and you can “upgrade” Yaiba which is very useful in protecting yourself against certain attacks.

At times, the game does remind me of God of War and Castlevania but without the variety and flare. The game can also be quite difficult as you progress as you face more and more enemies with their skills being ramped up as you progress. It should become a balance of block and attack but rather, it becomes a frustrating experience with a touch of controller rage. Unfortunately something is missing in this game, especially with its flaws. 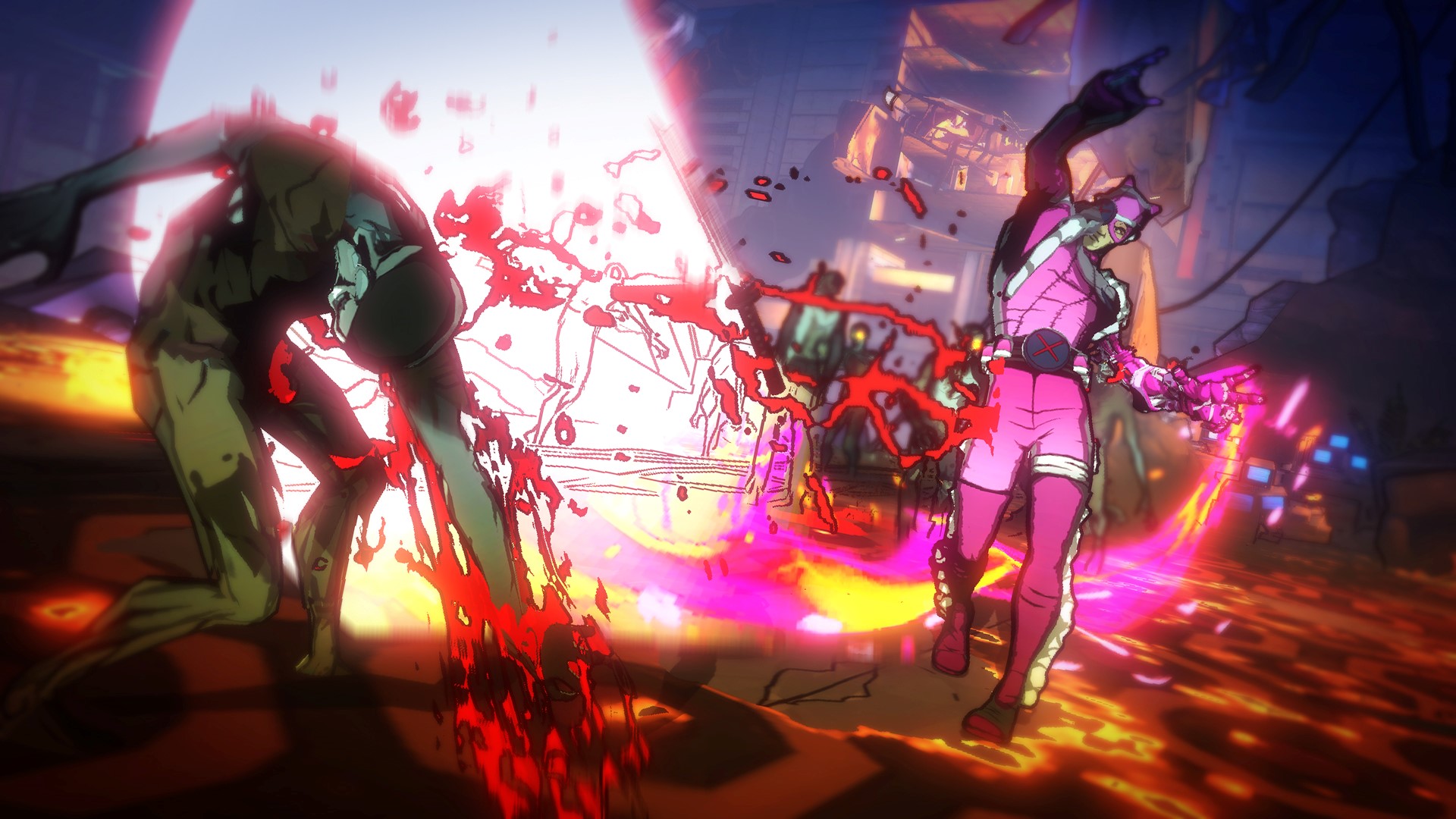 Graphically, I love the style of Yaiba: Ninja Gaiden Z, especially with its homage to comic books. As mentioned it is like a comic book come to life, especially when the gore starts and this game is quite bloody. Yaiba and the other characters are well animated and for the most part, the game is quite fluid. There are also some camera issues as well which does hinder the combat at times. The voice acting is as expected from a Team Ninja game, way over the top and although it’s quite cheesy, it’s actually a fun cheesy. The soundtrack works hand in hand with the story and the gameplay. 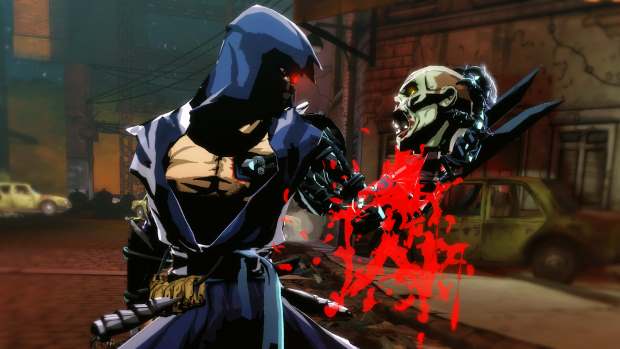 Yaiba: Ninja Gaiden Z delivers in some respects but fails on others. Unfortunately the gameplay is cliched and at times repetitive that does hinder the overall enjoyment factor of the game. The game probably needed some more polish before it was released in terms of gameplay but with that said, it’s definitely a very visual looking game and if you can get past the flaws, you might have a fun time.

• New IP from the Twisted Minds of two of the Best Developers: For the first time EVER Team NINJA and Comcept collaborate on a new IP.

• Zombies x Ninjas = YAIBA: Over the top, non-stop ACTION—relentless VIOLENCE is only interrupted by utter CHAOS!

• Twisted Zombies: Not only undead humans, but ungodly amalgamations of dead flesh that will blow your mind as you BLOW THEM AWAY! 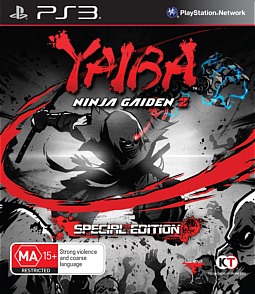