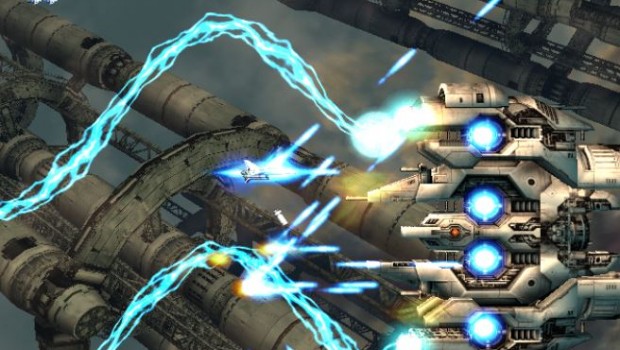 Previously released for PlayStation®2, the digital reissue of Gradius V marks the series’ first appearance for PlayStation®3. The classic shoot ‘em up recalls the all-action old school of video gaming and is an unashamed blaster with all the trimmings expected of a modern-day title. Gradius V’s horizontally-scrolling stages retain the same mix of shooting and weapon collection that is the backbone of the long-running series, yet upgrades every aspect of the game – adding some of the most incredible backdrops and varied adversaries to ever grace the Gradius universe.

In Gradius V, players control the legendary Vic Viper craft as it faces wave after wave of the Bacterian race’s alien warriors. Initially armed with just a front-mounted laser, as the player destroys specifically-coloured aliens they release a yellow power up capsule, lighting the ‘Option Panel’ at the bottom of the screen when collected. As more capsules are collected, varied and more powerful weapons are accessible, including lasers, bombs, shields and extra weapon pods. Gradius V, however, ups the ante even further, giving the player access to four different weapon arrays, each including bespoke power ups that will be essential if the seven stages are to be successful cleansed of the alien menace.

With its tried and trusted mix of powerful weapons, options for single or simultaneous two-player action, huge end-of-level adversaries and uncompromising levels, Gradius V is the perfect introduction to one of video gaming’s oldest and hardiest genres.