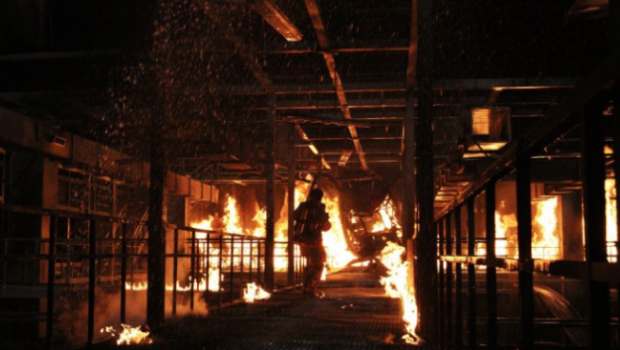 Summary: Though the inevitable comparisons between Die Hard and The Towering Inferno (such as those adorning the box cover) aren’t entirely unjustified, The Tower is both more comedic and markedly more idiosyncratic than either of those two films.

Though the inevitable comparisons between Die Hard and The Towering Inferno (such as those adorning the box cover) aren’t entirely unjustified, The Tower is both more comedic and markedly more idiosyncratic than either of those two films.

It’s also a quintessentially Asian take on the disaster genre – it’s hard to imagine a Hollywood film of similar subject matter playing its first half hour so determinedly for laughs, or attempting such an ambitious juxtaposition of dorky slapstick humour and emotive CGI-driven high drama. The most bizarre thing is that the attempt isn’t entirely unsuccessful: helmed by director Kim Ji-hoon, the film represents a monumental step up from his disappointing 2011 effort Sector 7 and boasts a number of thoroughly convincing performances as well as some hugely impressive computer-generated special effects.

On New Year’s Eve 2012, the inhabitants of a 120-story luxury Seoul skyscraper are preparing for the part to end all parties. Single father Dae-ho is racing around in his dual role as manager and babysitter, much to the chagrin of his young daughter (delightful newcomer Mina Cho). Complicating matters are the escalating whims of the building’s penny-pinching millionaire owner, and the fact that Dae-ho is unabashedly besotted with his beautiful co-worker Yoon-hi (Son Ye-jin, A Moment to Remember). When a Christmas-themed helicopter stunt goes decidedly awry a fire breaks out on one of the upper floors, and all hell and no small measure of melodrama breaks loose.

The doyens of South Korean cinema have historically been more than willing to combine high drama with unabashed slapstick – see previous Madman releases like Chaw and the excellent Haeundae for proof. It isn’t always successful here and it arguably leavens the tension too much in the all-important opening act, but Kim Ji-hoon is nonetheless successful in introducing his central characters, and more importantly their humanity, in the film’s opening half hour. A movie such as this is buoyed by its performances and the central cast universally fail to disappoint – add to that some of the most ambitious and convincing special effects ever seen in a Korean film and you’ve got the makings of a pretty decent night in.