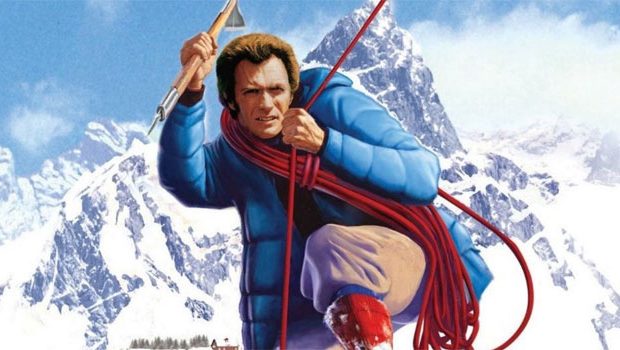 Summary: Eastwood stars in this thrilling mountain adventure as he seeks to kill the man who murdered his best friend!

After several scriptwriters and numerous script changes, it is no surprise that a movie adaptation of a James Bond spoof by an author going by one name ended up being something of a camp classic.

The Eiger Sanction isn’t nearly as dripping in masculine sweat as the title and its plot might suggest. Sure, it’s got Clint Eastwood, but he’s playing a professor and art collector who happens to be a retired government hitman. Sure, he used to work for a government agency, but this agency is headed by a lisping albino who can’t stand direct sunlight. And sure, while there is a great montage sequence where Eastwood gets back into shape by climbing as many rock formations in the South West United States as he can find, there’s a heap of sequences where lusty women lie by the pool wearing the barest minimum possible. 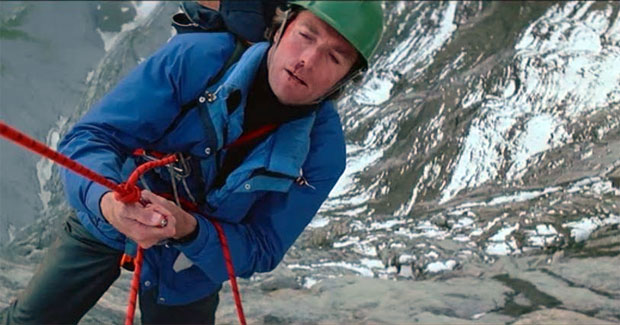 The Eiger Sanction falls squarely into the three act structure – there’s Eastwood being unwillingly induced to come out of retirement so he can kill (sanction) men who murdered a friend of his and fellow agent. The middle section goes through his retraining efforts (in many ways, this visually is the most spectacular section of the movie) and finally, we go to the Eiger mountain in Switzerland, where location shooting adds an extra dose of peril to proceedings (we aint mounting this mountain on a soundstage).

The first half of the movie is pure 1970s American film making. Eastwood (lead actor and director) is intent on mining all the tropes he can find. Unwilling hero, forced to return to work; a noble fellow immune to the temptations of the flesh (until he isn’t) some really offensive queer baiting and imagery that a light of millennials would probably die from shock if they came across it today, and a camp sensibility (all the assassins have code names – the head of the department is Dragon, Eastwood is Hemlock, there are agents named Pope and Cerberus and so on) that is hilarious to watch.

Eastwood snarls his way through the script, a peculiar performance that is at odds with the professorial character he portrays. It’s interesting the female lead (Vonetta McGee) is an African-American – almost unheard of outside the Blaxploitation movies of the era. Still, she’s not given much to do, and is stranded near the end of the movie watching Eastwood through a telescope as he climbs the Eiger.

Of more note is a bluff and hearty performance by George Kennedy (Ben Bowman), a friend and fellow mountaineer to Eastwood’s Hemlock. Kennedy’s hail fellow, well met routine is a nice counter to Eastwood’s dry cynicism. It makes the revelation about Bowman later in the film doubly shocking.

As I’ve said, the middle section mostly makes up for a slow start. Eastwood loves to let the camera linger during his early scenes, and there’s never any real sense of urgency, even as the character we follow through the opening minutes of the movie is killed in his own apartment. It’s that lack of pace that makes this movie a great contrast to movies from the current era, with frenetic pacing and even faster edits the norm. It’s also interesting to compare The Eiger Sanction to Cliffhanger, which has much the same storyline, for the change in editing and filmmaking techniques. 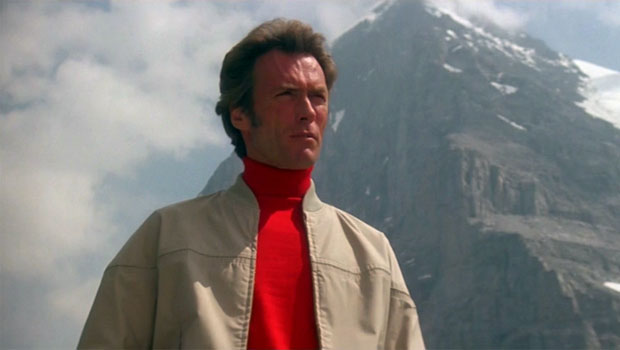 What sets this movie apart is Eastwood’s insistence on doing his own stuntwork and location film-making. Eastwood is insane in his willingness to rope himself to a rock formation and climb up and across. Aside from Tom Cruise, this would never, ever happen today. Thankfully, Eastwood is made of sterner stuff than movie executives, and his appearance in climbing scenes, and not a stunt double, adds more grit and credibility to the action.

The location shooting, in America and Europe is stunning, aided by a very nice restoration of the film print, which on this release is clear and crisp. Up on the Eiger, Eastwood and his fellows (one of whom he has to kill) clamber around rocks and across snowy sections, with nary a studio floor in sight. Indeed, one of the climbers hired to assist in the film-making was killed in a rockfall during production, testament to the bravery of all involved and Eastwood’s insistence on filming onsite.

All in all, The Eiger Sanction is definitely a lesser Eastwood movie – there are campy and pulpy moments early in the movie that undermine the fundamental seriousness of the set up. The sexual politics (on both sides) is ugly by today’s standards, but we should take different times into account, nonetheless. As the movie gets motoring, it becomes less about who Eastwood has to kill, and just sitting back and admiring not only the fantastic natural locations, but also the ballsy nature of Eastwood’s decision to film outside a studio set up.

As mentioned, the video image is crisp and clear, never more so than when Eastwood appears in the desert and is picked up by Kennedy in his truck. The sound is similarly well done, even if the music is severely dated. The only extra is the film trailer, which does a good job of tightening the storyline up and making it far more exciting than the early section of the movie.