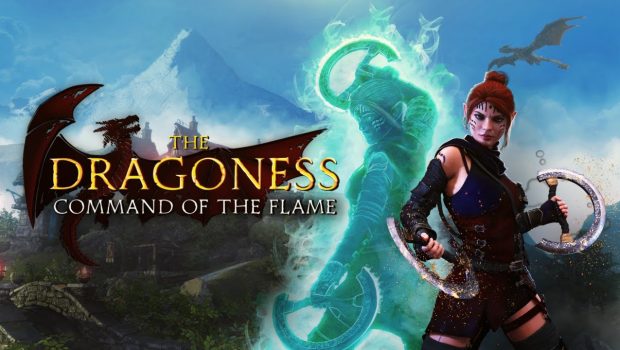 The Dragoness Command Of The Flame PC Review

I’ve been a fan of Heroes of Might and Magic since I remember buying my first (multi title) copy decades ago. Since then I found Kings Bounty which is arguably my preferred take on the genre. So when a new game in the HOMM style came up for review I was keen to have a look.

The Dragoness Command Of The Flame does indeed seem to tick a lot of the right boxes, there’s city building, unit selection for your army, spell use and exploration. But… it ends up feeling a bit under cooked or perhaps watered down. 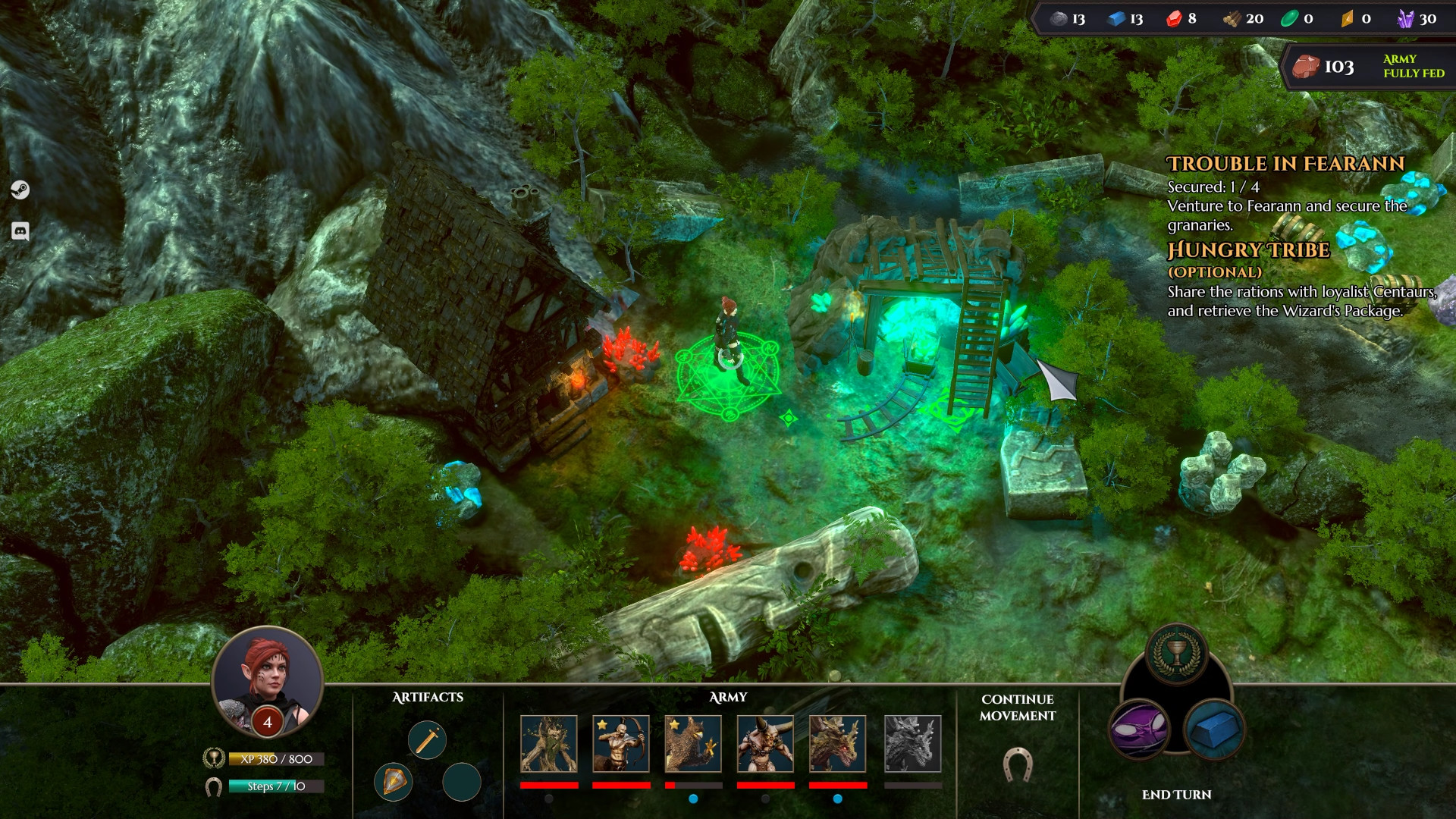 The basic story involves the battle between two dragon clans, the Regals and the Shai-Va, these story elements are told via illustrated panels as if being read from a revered tome. You have a guide to help you on your quest to rebuild the devastated kingdom… a battle pangolin named Natiq… this may seem like a good idea as it takes care of any exposition but I found his voice quite irritating and he would pop in comments as you move over trigger points on the map… but these points can trigger as you walk past them and as such his dialogue gets cut off by the battle you end up in or some other event that you may have triggered. 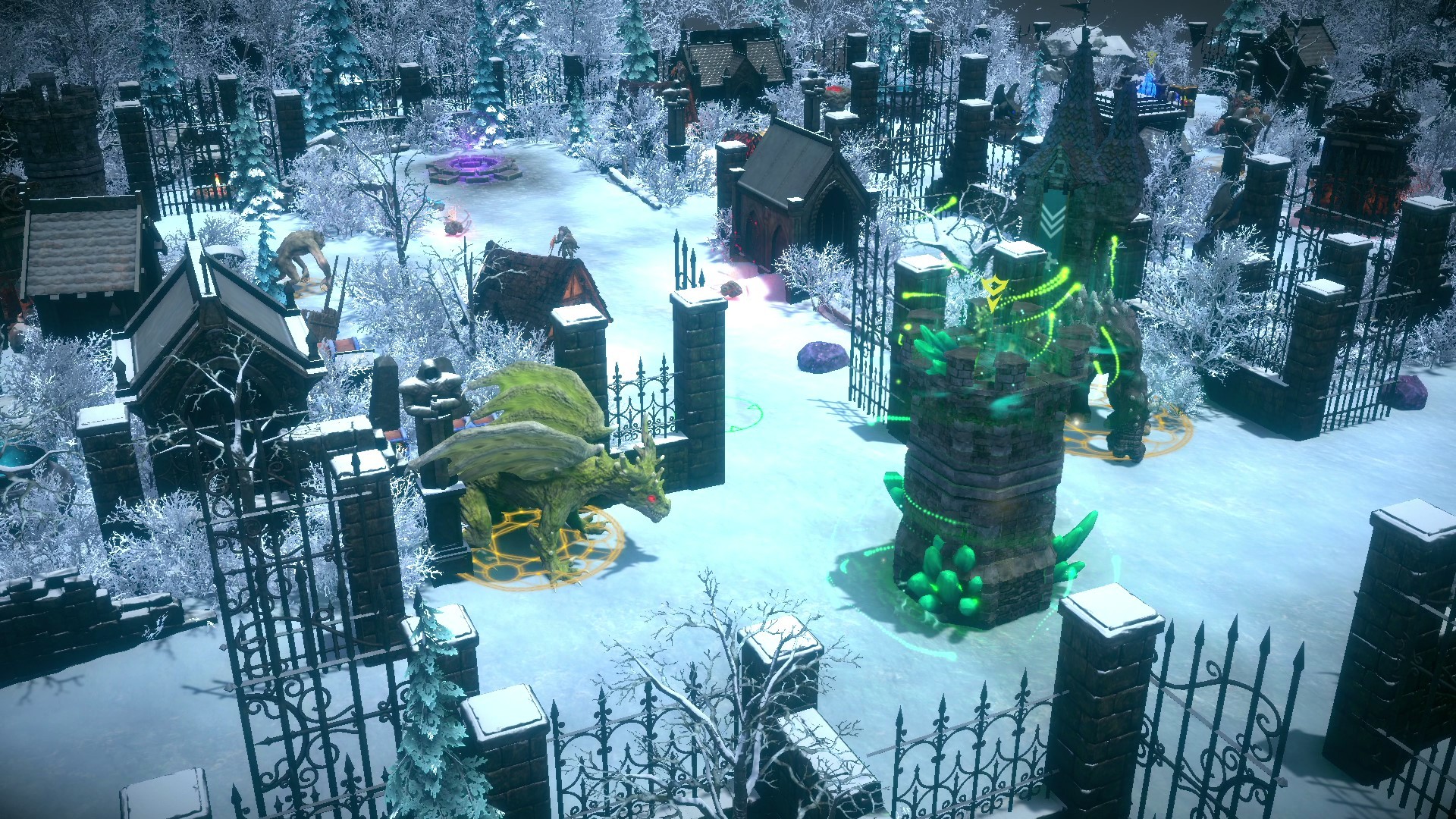 Your quest is split between rebuilding the capital (as you progress you gain resources and access to rebuild structures such as the forge, market, mercenary camp… the things you will need to make you powerful enough to complete your quest) and your exploration/mission section. Each time you choose an area of the map to enter a mission (sometimes there is only one place you can choose, other times maybe a couple), you have to choose which revival spell to use. This is one of the major elements I dislike about The Dragoness Command Of The Flame, it feels like you get reset every time you start a new mission and that is essentially what happens. You will complete one mission, having leveled up, gained spells etc, then you will start the next mission with no (or maybe one) spell and your other attributes basically back to zero. It makes it feel like a game of one step forward two steps back. The revival spell forces you to choose between two “load outs” basically you have some perks ie extra movement, more mana etc and you need to determine which is likely to be more useful in the given mission. Whilst in the mission some of these perks are presented as options for the end of turn, ie start the next turn with an armour boost to your troops, regain more health etc. It’s an interesting mechanic… but one that I think needs more refining and and to have the sense of being “rebooted” removed. 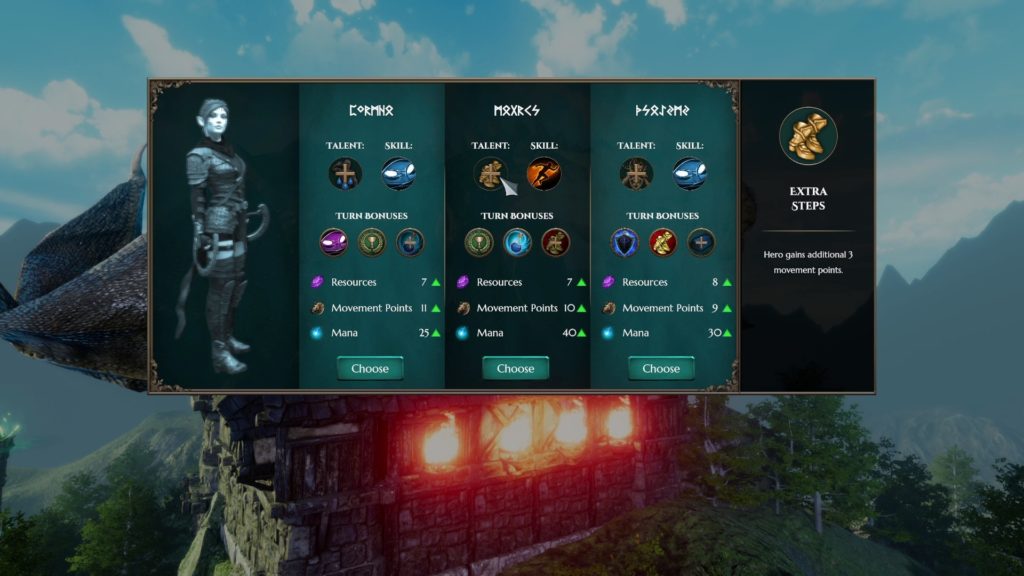 Sound is a bit interesting in the game too as I found the volume control a bit questionable, much like movies and TV these days, the music and effects seem far to loud compared to the voice volume, that should be easy enough to adjust in the settings only it seems the music (or at least the musical introduction to battle scenes) is not classed as music it seems to be regarded as general volume as I couldn’t seem to isolate it in the volume settings. Other than that, the sound effects are all fine… nothing amazing but not horrible (though you will likely want to try and skip Natiq talking). 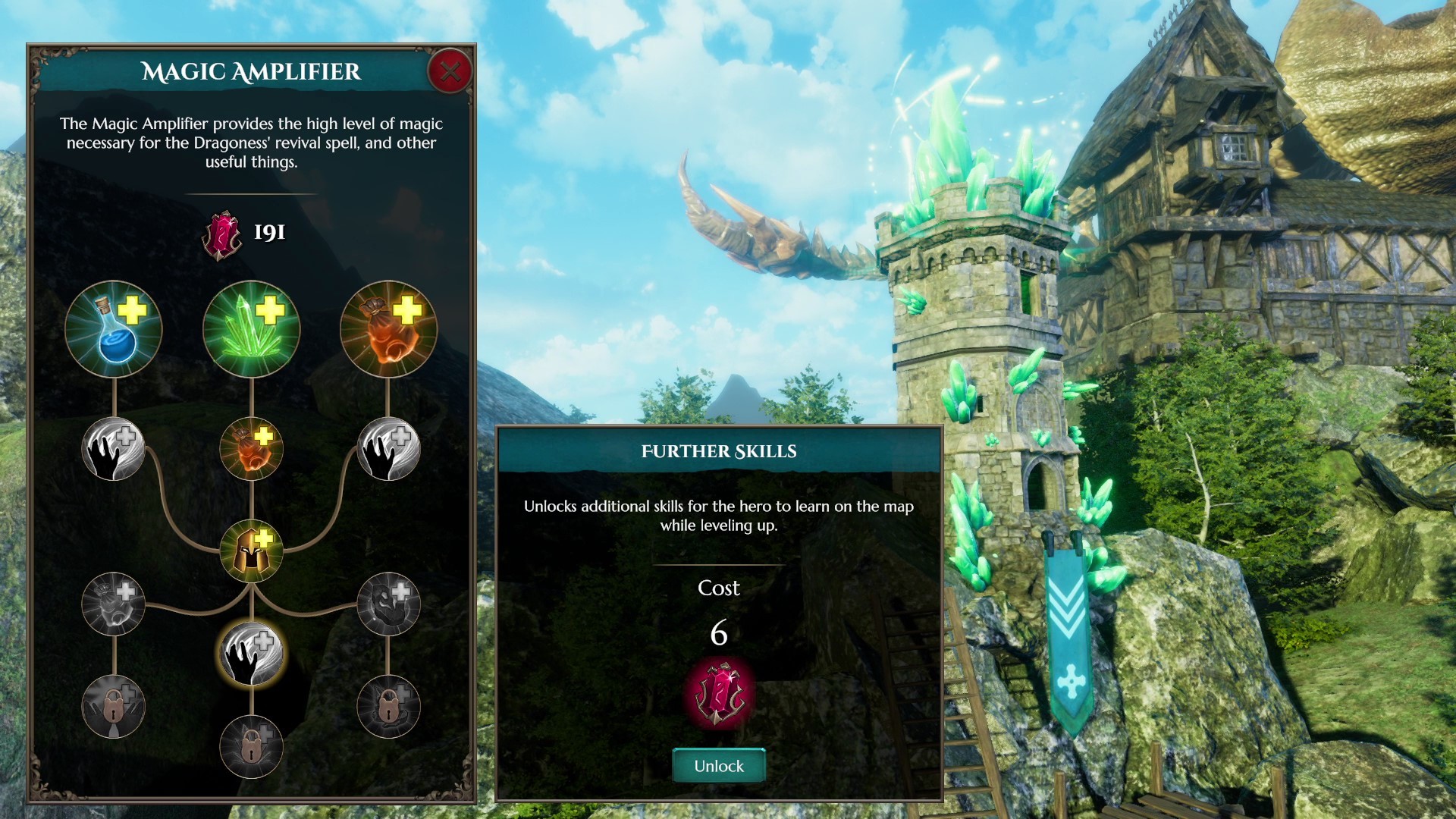 Combat is fairly straight forward and will be familiar to those who have played HOMM or similar games before, but there’s no polish to it, the troops are simply on either side of the battle field and things begin. You have your (often limited) spells, units have strengths and weaknesses, ranged vs melee, spell users, slow vs fast, weak vs strong etc. It’s perfectly functional but it lacks a bit of visual flair (as do many things compared to the main headquarters and especially the 3D rendered dragon of your main city) and can get quite repetitive. 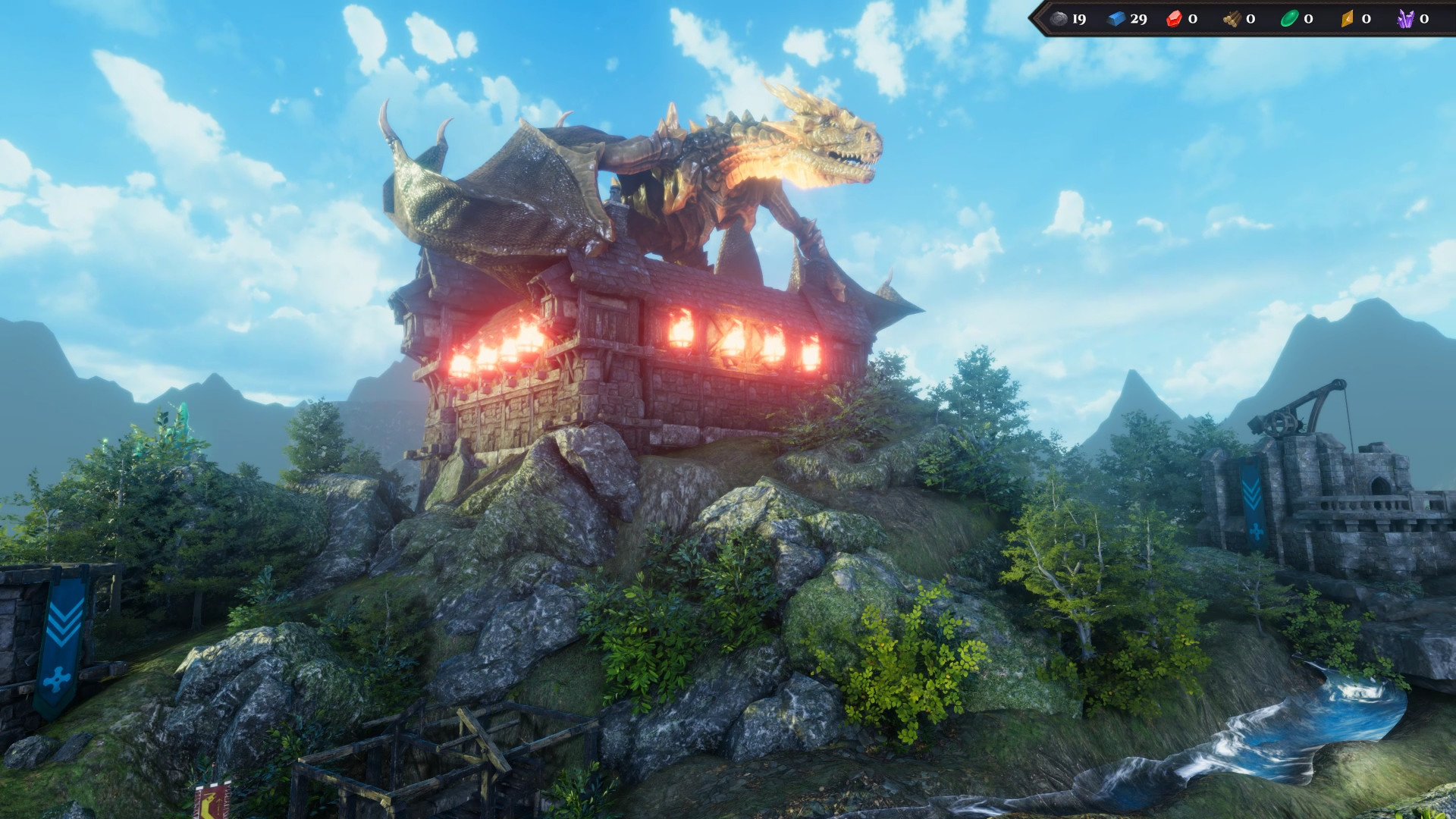 Over all… I’d probably recommend HOMM or Kings Bounty before The Dragoness Command Of The Flame… but if you have gone through all the other options… this can still provide some enjoyment, but probably in small doses as that character reset mechanic can be quite draining. 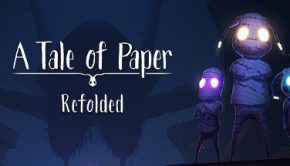