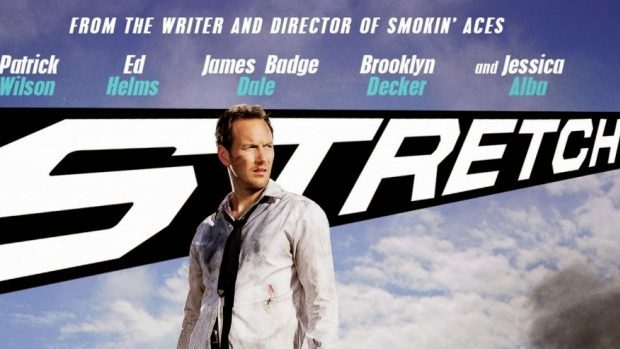 Summary: Comedy at a stretch... action-a-plenty. Nearly there, but not quite.

I think Stretch is meant to be a comedy… there we go I’ve addressed the elephant in the room, now we can proceed. The quickest synopsis I can give here is that Stretch is a down on his luck limo driver told he has to suddenly find the $6000 he owes in gambling debts at the same time that his work is going down the toilet. With one generous eccentric customer he stands to clear his debts… if he can survive the night. Littered with strange characters and a perfect opportunity for celebrity cameos Stretch had the potential to be quite interesting… and it is, if you can get past the first two thirds.

That first line I had about thinking this is meant to be a comedy might be all my issue… perhaps I just don’t get or appreciate the comedy contained within… I believe I did get a slight chuckle at the notion of his ex breaking up with him the moment after coitus (not after as in, lying beside each other in the afterglow… after as in “just finished”). There were also some other moments worthy of a chortle… but for the most part I felt it was simply an action film (but not in the way that Die Hard and its ilk could be said to be comedic action films with the witty one liners etc). Patrick Wilson (Stretch) is no stranger to comedies… and clearly putting Ed Helms into the film indicates to me they were after some laughs… but Ed Helms seems really redundant post mortem. I get what they were trying to do… essentially fill the quiet moments but not simply use internal monologue (which they had already arguably overused at the start)… but he doesn’t really add anything significant and to be honest I think Stretch talking to himself outloud probably would have been a better option.

In regards cameo’s… well there’s Ray Liotta who has been arguably quiet of late but at least made a decent impact when he was gracing our screens more often. Then… then there’s David Hasslehoff… the man who won’t let past glories go… he’s a little like Shatner except that I think Shatner is aware of the irony and plays to it… Hasslehoff seems to be blissfully unaware of the absurdity of his performances and this is coming from someone who sat in Kitt at Universal Studios… so it’s not like I didn’t like him… but I think he needs to have a good long look at himself and not just to preen.

One gimmick that is used throughout is focused around social media/mobile phone use… whenever a call or a text comes through we see it pop up on the screen (much like the old pop up video music video style in fact) and get to read the text/call as if we are looking at Stretch’s phone ourselves. It’s not a bad gimmick, it adds a bit of pizzazz to the scenes and the main texter does indeed end up being who we think it is… but I didn’t mind that… it is revealed in a kind of nice way.

The first two thirds of the film, to me, felt a bit heavy handed or perhaps a bit unpolished. As much as the initial Limo pickups did serve a purpose… they were arguably a bit drawn out and the whole limo rivalry thing was played a bit more than needed. But then there was the final third… the act in which the set ups came to payoff. The pace was a bit more frenetic (which was required given the circumstances). There is also a great exchange in front of a club involving the attempt to acquire a car… I won’t spoil it for you but you will know it when you see it.

Would I recommend it… I suspect it will have a devoted following, people who say it was awesome and that Chris Pine has never been more interesting in any other performance. But I don’t think it’s a safe bet… it’s not for everyone and for some people it just won’t be their cup of tea. For me it was a bit touch and go but the final hurrah was quite satisfying. Maybe rent it first.