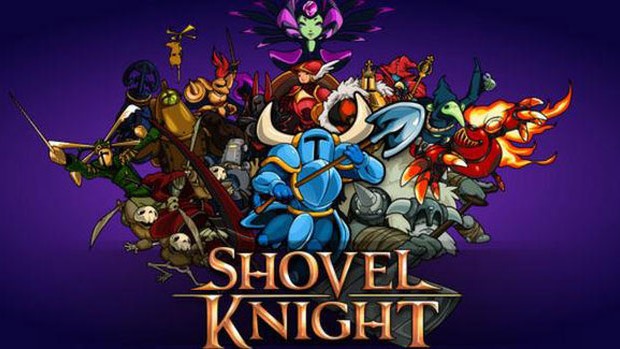 Summary: A delightful treat for gamers of all ages!

Shovel Knight is the debut game from indie developers Yacht Club Games. Originally made as a download-only game, this gem was a big enough hit to award it a physical release. And it’s not hard to tell why the game is popular. It has all the appeal of a classic. Clearly a send-up to the games of yesteryear, Shovel Knight is a fun example of how modern game design can complement old technology and how old game design can complement new technology. In this game, our hero Shovel Knight must save his possibly-more-than-just-friend Shield Knight by defeating the Order of No Quarter and advancing to the Tower of Fate to defeat… the Enchantress. 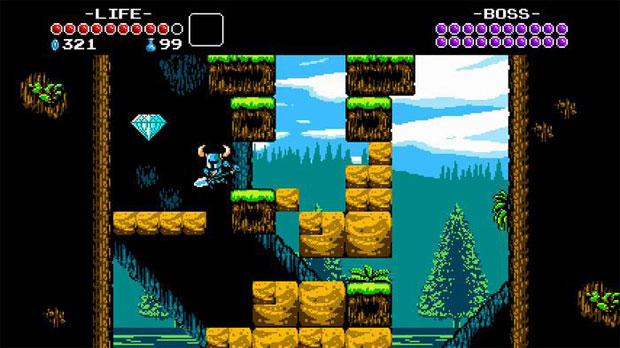 The gameplay of Shovel Knight is a mixture of platformer games and role playing games, with each area interconnected by an overworld map for a semi-open world approach. There are multiple pathways ahead for you, and all levels that unlock simultaneously are playable in any order you want. This world is filled with towns, lairs, special locations and mini game levels. It all fits together to give the game a true retro adventure touch. In the villages you can participate in small side quests, chat with the townspeople and upgrade yourself by spending your earnings on items, armor, and stat boosts. You can even expect to come across some platform-based puzzles in these areas. 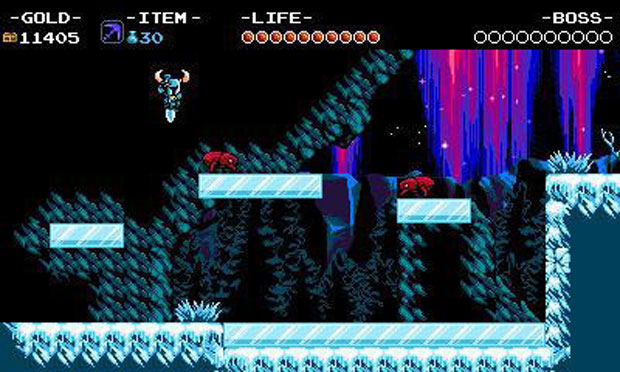 Most of the game mechanics take advantages of the signature weapon- the shovel! Out brave Knight must use his shovel to dig his way through caves and fight off enemies. The level design is very finely tuned. Typically, a level will introduce some kind of new mechanic that gets more complex or challenging as you learn it. Additionally, special areas that require certain items or moves to get through teach you how to use your new abilities as you unlock them, and at the end of each level is a boss battle where you can take advantage of your newfound skills, (or just abuse Shovel Knight’s overpowered aerial attack!) to whittle down their HP bit by bit.

The Nintendo 3DS version of the game includes an exclusive StreetPass function. In this mode, you can record a ghost time in a brief trial to collect as many gems as you can in just three rounds. When you StreetPass a stranger who also has the game, you can compete against their time. You can try collecting more gems to beat your StreetPass rival or you can stop them in their tracks by attacking them. The trick is, your rival’s ghost is invisible, so you have to predict their movements and strike with perfect timing and precision. Like a game of Poker, you have to study your opponent and pick up on their habits to use it against them. This mode isn’t a highlight of the game, but it’s something you won’t get in any other version of Shovel Knight. 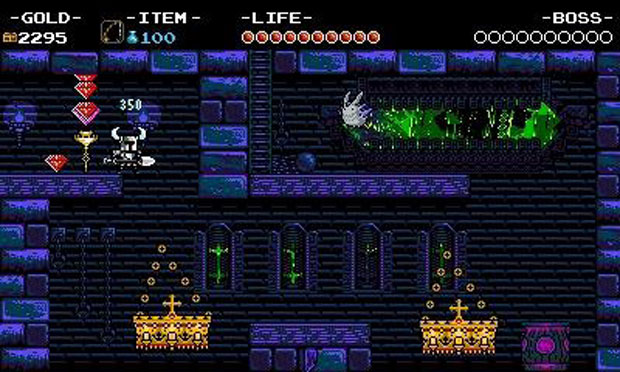 It’s pretty common to see an indie game taking advantage of quick and easy “retro”-styled graphics. But it’s often clear that this is more due to time and budget constraints instead of design. Most of the time these games use simple pixel art, not true 8-bit or 16-bit graphics. Shovel Knight treats the nostalgic graphics differently from the rest. Shovel Knight stays true to the graphical limitations of the early era of video gaming. You’ll be able to tell just by playing the game that Shovel Knight is a love letter to games of the late 80’s, with the colour palettes and sprite work strongly resembling vintage video games from the NES and the Game Boy Color. The music of the game also reflects this. The entire soundtrack is made from chiptunes, and it’s such a nice soundtrack you get a free downloadable version along with the physical copy of the game. 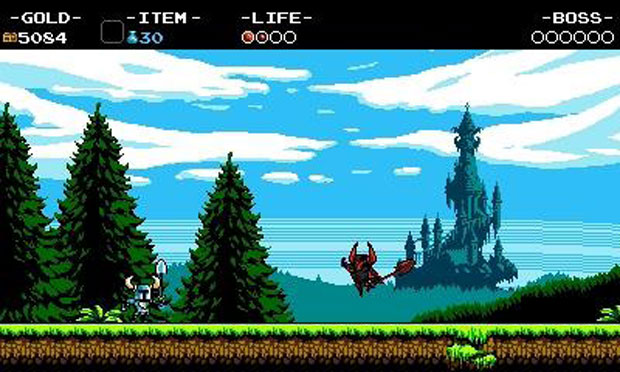 This game is quite short (one achievement of the game is to beat it within 90 minutes), but it is indeed sweet. Shovel Knight offers great value for a small package, and there are still plenty of achievements and even an unlockable new adventure that could keep you playing long after the credits first roll. Some of the best parts of the game come from the little Easter Eggs and side games that are mixed into the rest of the game. If there’s anything I wasn’t fond of, it was the enemy placement that pushes you into a deathtrap if you take a hit; but that’s a trifle. The ten-second post credits cutscene is surprisingly touching! I’m not going to spoil you, so you’ll have to see that for yourself though…