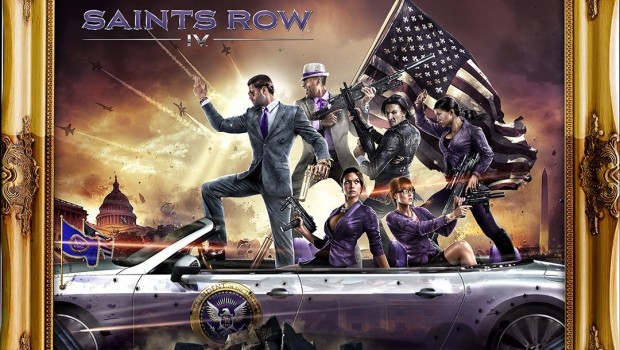 An amazing addition to the Saints Row series! It doesn’t take itself seriously, and you should not either. Full of laughs and over the top humor that any true gamer with a gamer’s humor will get and laugh out loud. The Saints are moving up in the world. Now the leader of the Saints is the big man himself, the President of the United States. The over the top absurdity is still present, though this time the developers have created a bit of a different story line that is, well… out of this world to cloak itself in and make some sense of some of the crazy stuff you get to pull off in Saints Row IV. 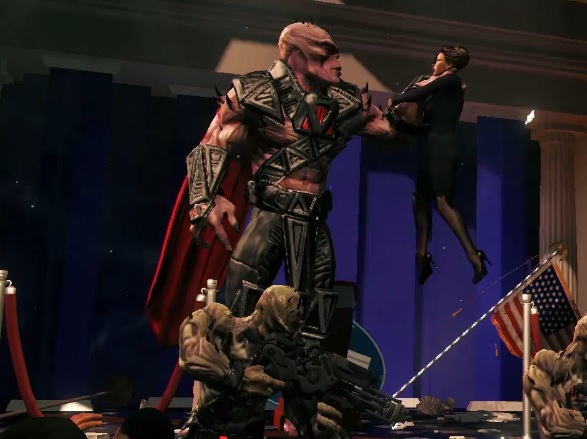 The game starts out pretty interesting showing off that power in the Whitehouse and some of the missions that a President has to order. So in some ways the game starts with a bang and builds up into a crescendo of over the top craziness.

What can you possibly do to keep it fresh and exciting for the Saints Row series after Saints row the Third? Well with Saints Row IV throw in an Alien invasion, make part of the game in a virtual world prison that the aliens lock you and your crew in, and then mix in all the raunchy over the top craziness that makes for a spectacular sand box experience. 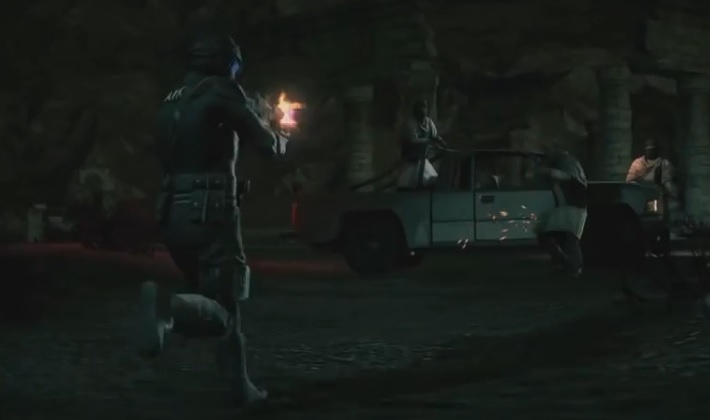 No joke, our hero whom you can customize the hell out of in clothing and hair and body type and features for that personal touch (You can change the gender, ethnicity, clothing, hair, clothing…it is insane genius to have such levels of customization.)

ANYWAY, our hero …is locked up in a virtual prison. The place is a weirder version of Steelport.

That is where it gets even crazier, because in the virtual world your brainy chick gang member helps you out enough to hack in and assist you with getting outrageous abilities in the virtual world. Your job to assist in this is by collecting data clusters that help unlock abilities. With super speed, super jumps and some short flying abilities you get the lay the hurt down on the alien scum. 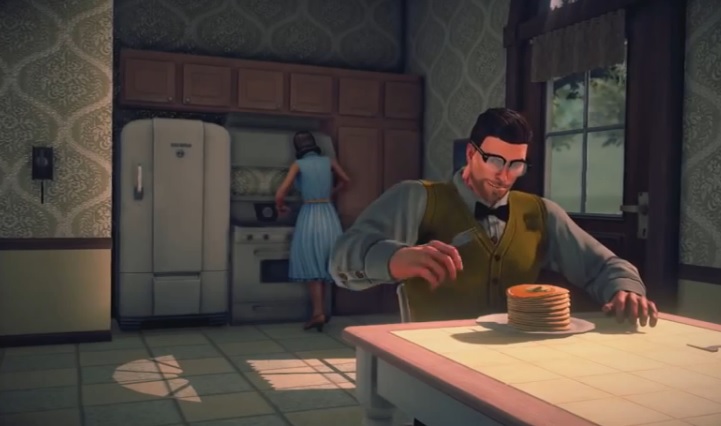 Along with the insane super powers, there are several bone crunching fight moves that never seem to get boring to pull off. Mixes of wrestling and insane bone crushing moves that will bring an evil grin to your face.

The game follows the same gaming structure of the 3rd game. Challenge missions are back intermixing with the main story missions. It’s a gleeful mash up of gaming here. With the super powers, it’s like a super hero game, there is plenty of running and gunning, add in some vehicle combat. Including space ship battles and you have a full plate of gaming goodness. 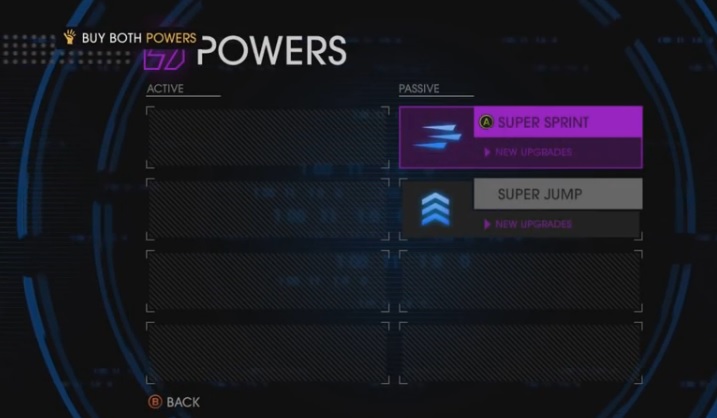 It was not just enough to give the player super powers, the designers cleverly decided to make the player have to use those powers in skillful ways to meet goals in the game. This is where some interesting plat forming takes place. Players as they traverse throughout the virtual world have to capture huge tower structures. In order to do that they have to wall jump, leap over great gaps and hit platforms to reach the tops. It’s a simple but clever way to get the player used to using the abilities the game throws at them.

Even with the super powers, the need for weapons does come up. Along with the standard lead spitting pistols and machines guns and shots guns, the more exotic tend to be just outrageously fun. Such as the Dub Step gun. This thing fires out rays of energy that anyone in the target area as well as vehicles is captured in its effect. Vehicles bounce as if they are low riders and people start doing crazy dances until they fall over. There are some other interesting special weapons that I just refuse to get into here. Half of the fun of a game is discovery. Oh boy are you in for some jaw dropping “I can’t believe they included this in the game” moments. 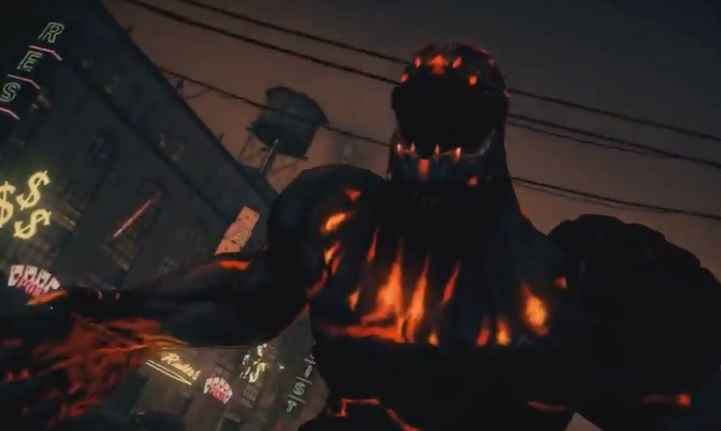 Now as to the enemies with in the game. The rather powerful Aliens known as the Zin. The Zin Empire is enough to throw some interesting curves in the game. Admittedly it would become rather boring only fighting the one Alien types, so never fear. The game developers must have thought that too because there are several what I call mini boss fights that throw different Alien types at the player to contend with. So the challenges do keep coming and keeps the player engaged. 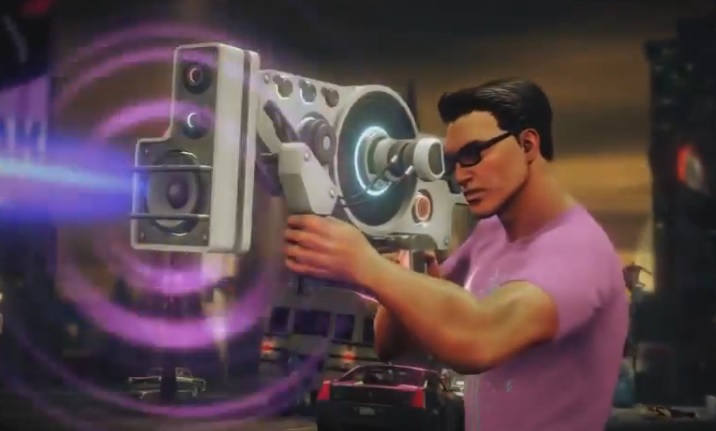 The Black Hole gun, opening up a black hole and having enemies sucked inside, Awesome! The dreaded inflato ray. This thing causes the target to inflate and expand like a living bobble head until they explode in a goopy mess. Plasma weapons and laser guns…. Thankfully the Aliens caused all of these new Over, OVER the top weapons and gear to the new playground.

Saints Row IV has some pretty interesting graphics, the world looks interesting and outright surprisingly beautiful. Light bloom and lens flairs are used to great effect as well as distance feathering of graphics in the distance lending a softness to distant objects. Since much of the game takes place in a virtual world, it is sometimes hard to figure if there is a graphic glitch or it was designed that way because you’re in a virtual prison in the game. I only had a couple odd pop in graphics while not in the virtual world prison, and three stuck in graphics incidents, things went swimmingly after that. 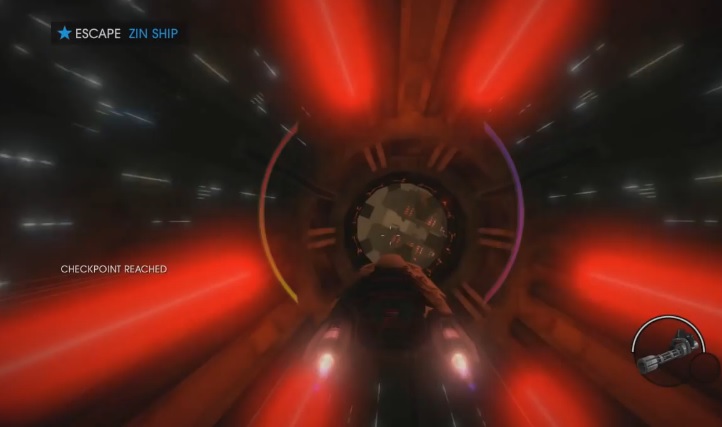 Volition it seems has made a new standard in over the top…no really I don’t think you understand… they went over the top before. Now they had to raise the bar in standards as well, just so they could go over the top of that.