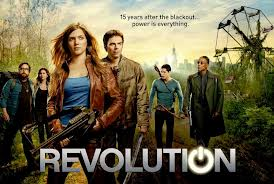 Summary: Beautifully presented on DVD with excellent video and audio quality, Revolution the Complete First Season comes with a wealthy dose of special features that take us behind the scenes also boasts a great gag reel!

Collecting all 20 episodes from Season 1 of Revolution, this is the perfect adventure drama series about a post-apocalyptic world that is as intelligent as The Walking Dead but borders more on Under the Dome opposed of the gruesomeness of the aforementioned series. Unfortunately in this post-apocalyptic world, the planet has been devastated by a mysterious blackout which has caused all our electronic technology to no longer work. Imagine a world WITHOUT FACEBOOK! Arghhh!

As a result and 15-years later, mankind has fallen from grace and local militias vow for power, whereas a few heroic individuals attempt to rebuild and bring order back to the world. Produced by J.J. Abrams, Revolution is created by Eric Kripke who together form this compelling series that revolves around Charlie Matheson and her brother asthmatic Danny. Regrettably for the Matheson family, their father is arrested and later shot by the local Militia who may hold the secret to the return of power to America. As a result, Danny is forcibly taken by the Militia which forces Charlie to find their long lost reclusive uncle Miles in Chicago who happens to be a former marine.

Joining Charlie is Aaron who was given a mysterious pendent by Ben before he was killed and Maggie, Danny’s girlfriend who commence their journey to Chicago to not only find Danny but hopefully join with others who can help rebuild the United States of America. However along the way Danny manages to escape where he meets a woman named Grace who has the ability to power devices left dead by the blackout.

As the series expands, the viewer is given an interesting insight into the remnants of America and other key stakeholders of power such as the Georgia Federation and Plains Nation where we learn that Randall Flynn, a former U.S. Assistant Secretary of Defence was responsible for the blackout and is a key player for reclaiming power within this shattered country. An interesting aspect of Revolution is the careful use of flashbacks that not only tells the history of key characters but also how certain current plots evolved which does dictate the story. It’s a brilliant premise that works well.

There are four central characters to the premise of Revolution includes Aaron (Zak Orth), Charlie (Tracy Spiridakos) and Miles (Billy Burke) who share similar morals but clash with Randall Flynn whose twisted sense of patriotism is actually a breath of fresh air opposed to the stereotypical villain. His motivations are quite interesting and in the last episode The Dark Tower, it really cement his goals, especially with the surprise twist. My only concern to Revolution is that we may not see all the story lines play out and hopefully Season 2 once aired in the US will provide strong ratings and a decent conclusion.

Beautifully presented on DVD with excellent video and audio quality, Revolution the Complete First Season comes with a wealthy dose of special features that take us behind the scenes also boasts a great gag reel!

Overall, this is a wonderful TV series!

Special Features
• An in-depth look at the Revolution Pilot