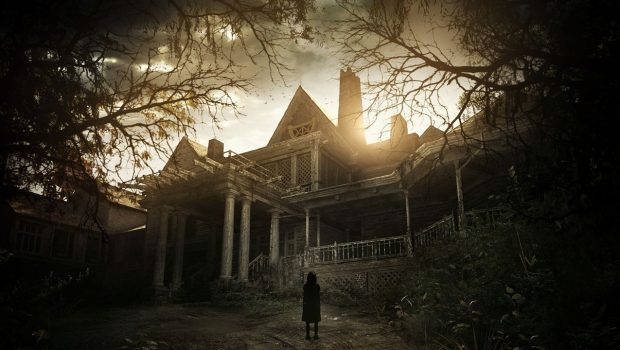 Summary: Resident Evil 7 stands at the forefront of immersive first person horror, proving itself to be far more than the P.T knock-off that the demo initially suggested.

The Resident Evil series has had a profound effect on me as a gamer – The original game was the first title I played on the PlayStation and I remember 13 year old me being blown away by the photorealistic backgrounds and decidedly mature tone, although in retrospect I can recognise that the tone was also as camp as a row of tents, but that’s part of the game’s charm. 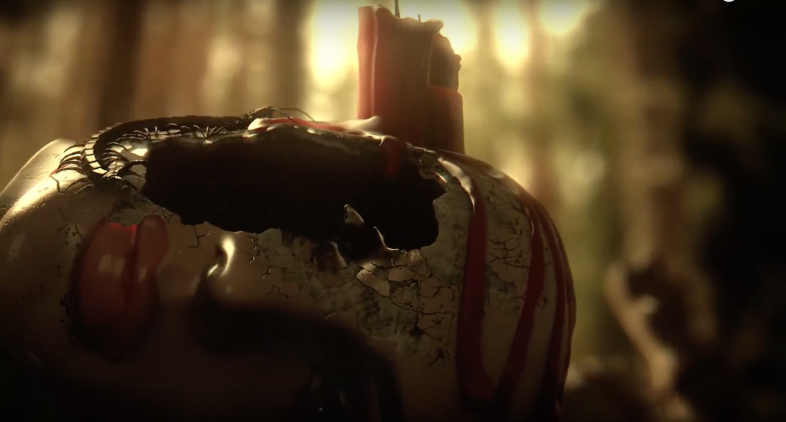 Resident Evil 2 was the first game that I actually bought myself, slowly paying it off with my pocket money each week until I finally had it in my grubby little mitts, playing through the dual scenarios back to front in order to discover every secret and obtain that elusive ‘S’ ranking. Over the years I followed the series, from the slightly underwhelming Nemesis to the genre-redefining Resident Evil 4 and beyond.

Personally, I wasn’t the biggest fan of the more action oriented direction the series took after 4, although I still had fun with them and it’s undeniable that mechanically the games were definitely evolving in a positive way. Still, I felt that the latter entries were lacking in that oppressive atmosphere, removing the survival horror elements in favour of jacking up the firepower and having characters slap the shit out of boulders. The story became increasingly convoluted to the point that I had trouble keeping everything together, what with all of the human-mimicking leeches and other assorted detours into the bizarre, and I started to lose faith that we would ever get back to the visceral roots of the series. 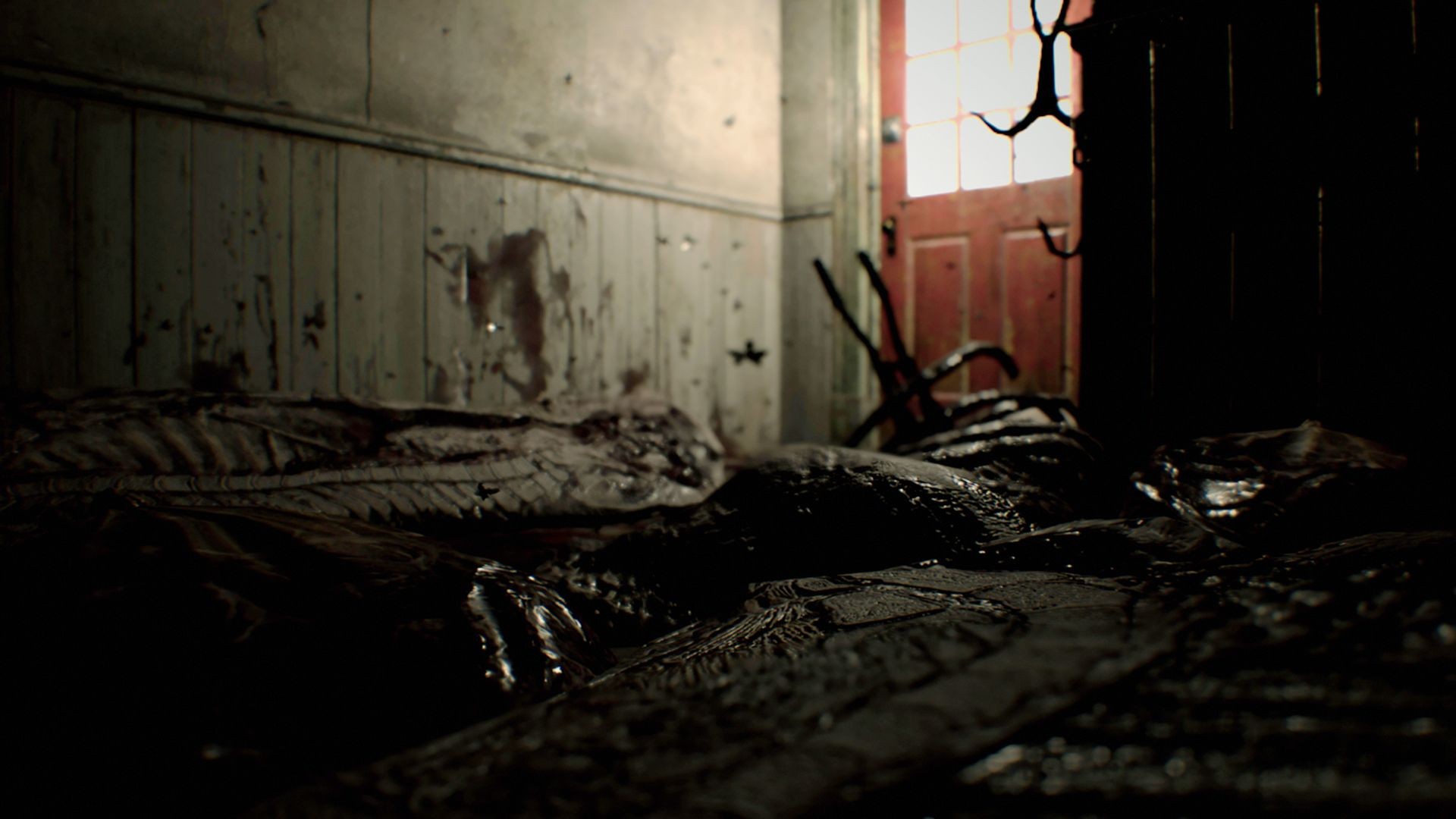 Then Resident Evil 7: Biohazard was revealed, showing what appeared to be a more grounded, serious take on the franchise, eschewing the trappings of the mythology and essentially starting afresh, building upon a few disparate threads of established Resident Evil lore in order to give fans an entirely new survival horror experience.

The shift to first-person raised the ire of some fans but, personally, I was always on board, having sunk many hours into Outlast, Alien Isolation and P.T. After playing through the demo hype levels were at a maximum as fans pored over every minute detail, agonising over the true purpose of that damn mannequin finger.

Of course, however, the question still lingered in the back of our minds – Could Resident Evil 7 truly recapture its audience with a return to true horror or would the game devolve into the usual incomprehensible plot twists and action set-pieces? 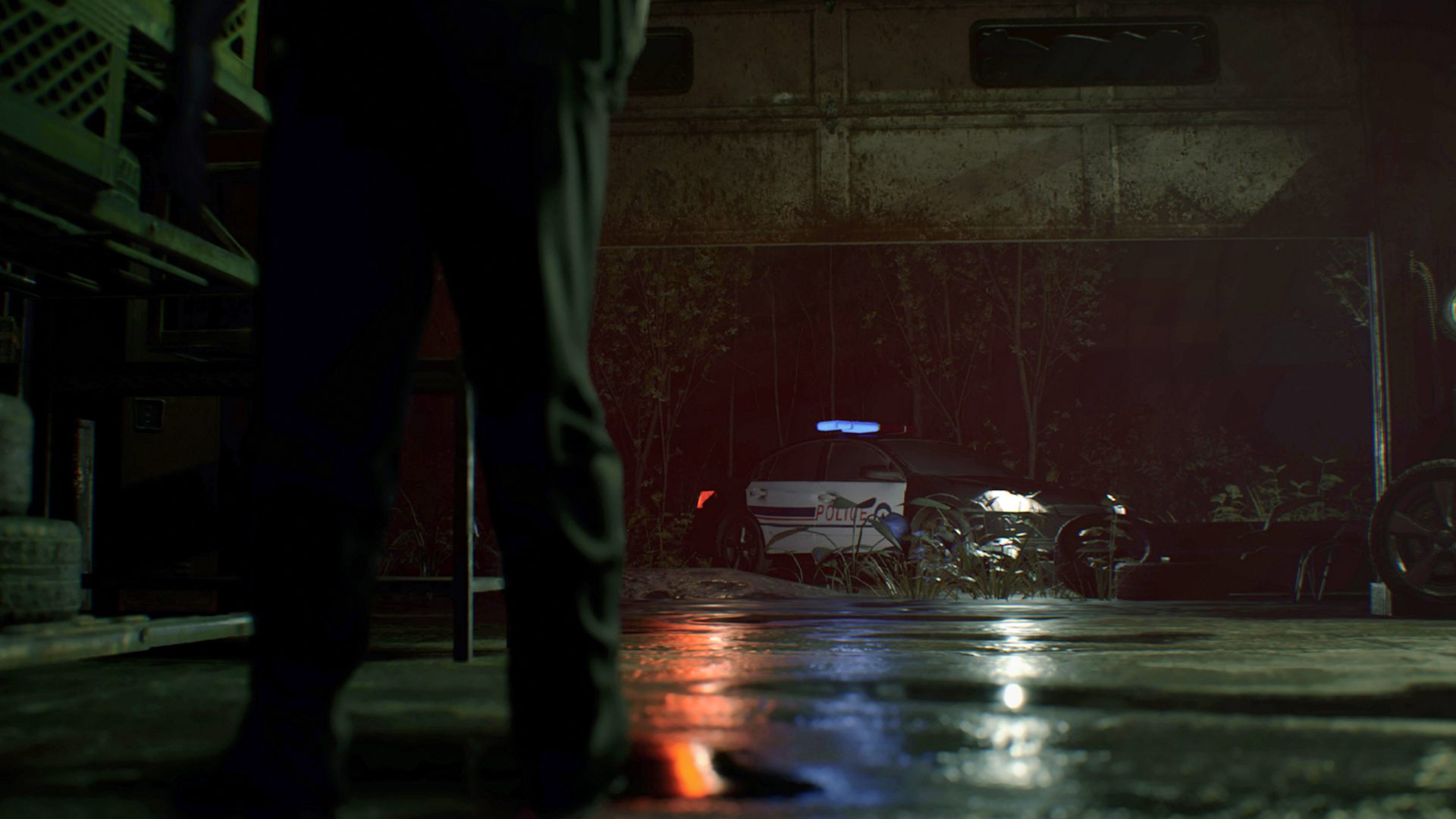 Now with the game finally available on shelves, we have an answer to that question and, for horror fans at least, it’s a positive one. Resident Evil 7 is, to me, the best entry in the series since 4 and, in some respects, may even be jostling for top position with Resident Evil 2 in terms of personal ranking.

Resident Evil 7 puts you in the shoes of Ethan Winters, an everyman far removed from the hyper-macho posturing of Chris Redfield or the grimacing caricatures of angst that are your usual protagonists.

Instead Ethan is, much like James from Silent Hill 2, simply seeking his wife Mia; after her disappearance three years prior, Ethan receives an email asking him to come to Louisiana and decides, “Hey, screw it, I’ve got nothing better to do than chase ghosts on the Bayou, sign me up!”

A short car journey later and Ethan arrives at a dilapidated mansion tucked away in the swamps and sets out on his journey to discover Mia’s fate once and for all.

This opening section is quite far removed in tone from the previous games, effectively building up a creepy atmosphere as you carefully pick your way through the house in search of something you can wield as a weapon.

There’s an air of mystery about everything – Where’s the usual Resident Evil stalwarts like Umbrella or biohazard infected secret research facilities? Who the hell is this creepy inbred looking family and how exactly do they fit in to the big picture? 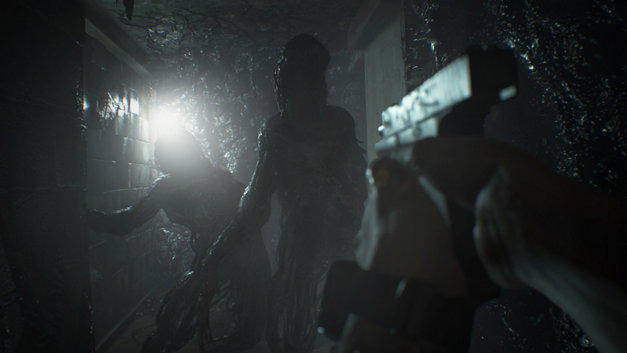 The best way to describe the vibe of the first hour or so of Resident Evil is it’s like an unholy marriage between the Evil Dead remake and The Texas Chain Saw Massacre; gone is the campy, tongue-in-cheek tone and instead you’re subjected to an intense and violent barrage of assaults on the senses.

Without spoiling too much, the game does eventually settle into a formula that’s more reminiscent of the early games, tasking you with collecting themed keys and mucking about with statues like the good old days. Aside from the family, Ethan must also contend with horrific manifestations that, honestly, remind me more than a little of the putty patrol from the Power Rangers. Don’t let this comparison put you off though, as they can be quite the formidable enemy when your ammo supplies get low. 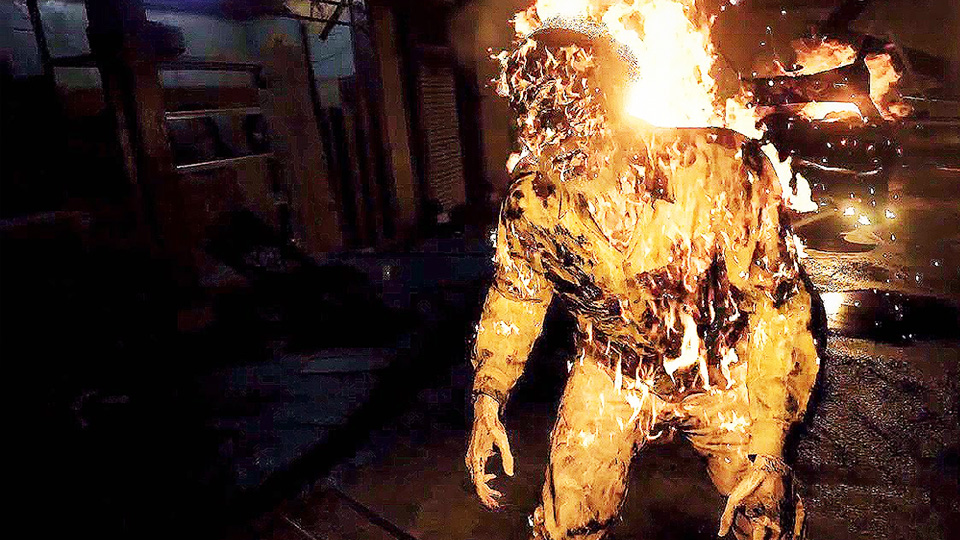 This leads me to the next element that makes a welcome return to the series – Limited ammunition and inventory management are at the fore, meaning that Resident Evil 7 harkens back to that frantic scramble for survival that defined the original trilogy in particular. Near the climax ammunition does become more plentiful and it’s never as punishing as it was in the original Resident Evil but it was nice to find myself running around in a panic, desperately searching for a handful of rounds to slow down the trio of creatures scurrying behind me.

The combat itself is competent enough but nothing revolutionary. Melee attacks feel satisfyingly weighty but the gunplay can feel a tad underwhelming, most noticeably when using the burner. This kind of makes sense though, at least in terms of the narrative – Ethan isn’t a trained S.T.A.R.S specialist or a rookie police officer, he’s just a regular dude who’s been thrust into an irregular situation… You wouldn’t exactly expect him to possess the marksmanship skills of Hawkeye. 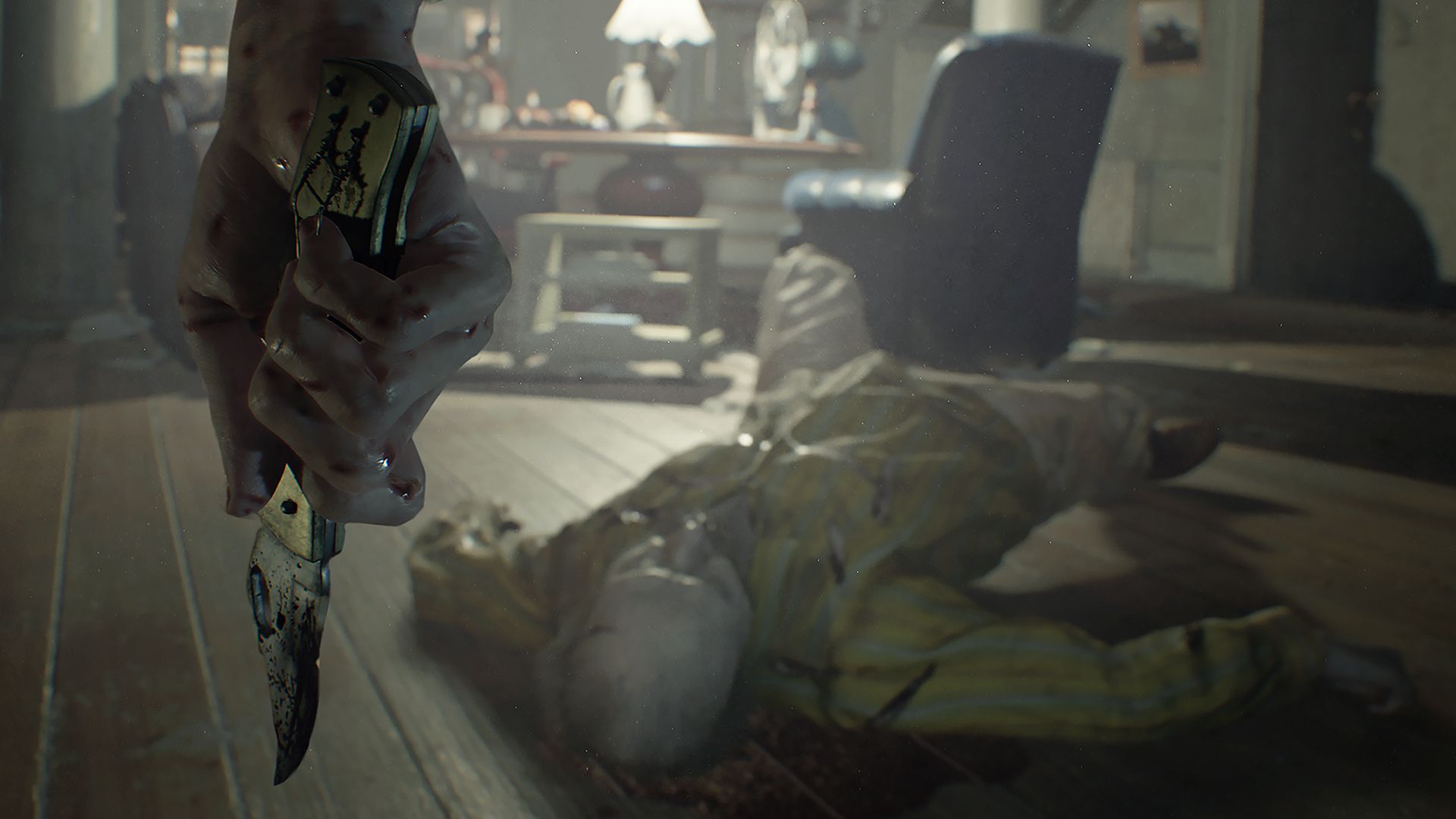 Resident Evil 7: Biohazard is visually quite impressive, with great detail to the environments and a suitably gritty aesthetic. The only minor issue I experienced was textures sometimes taking a few seconds to load in, although this might not be as evident if you’re gaming on a PlayStation 4 Pro or using VR.

Capcom have pulled off the audio with similar aplomb, crafting a moody and immersive track punctuated with impeccable ambient noises, although it must be said that there aren’t any truly memorable or standout tracks aside from “Go Tell Aunt Rhody”.

A brief caveat – I only had a short spin in VR as I don’t have my own headset yet, so I don’t really feel qualified to comment too much, besides to say that it is, understandably, an even more engaging experience.

#: For more information on our VR experience, please check out https://www.impulsegamer.com/resident-evil-7-biohazard-playstation-vr-experience/ 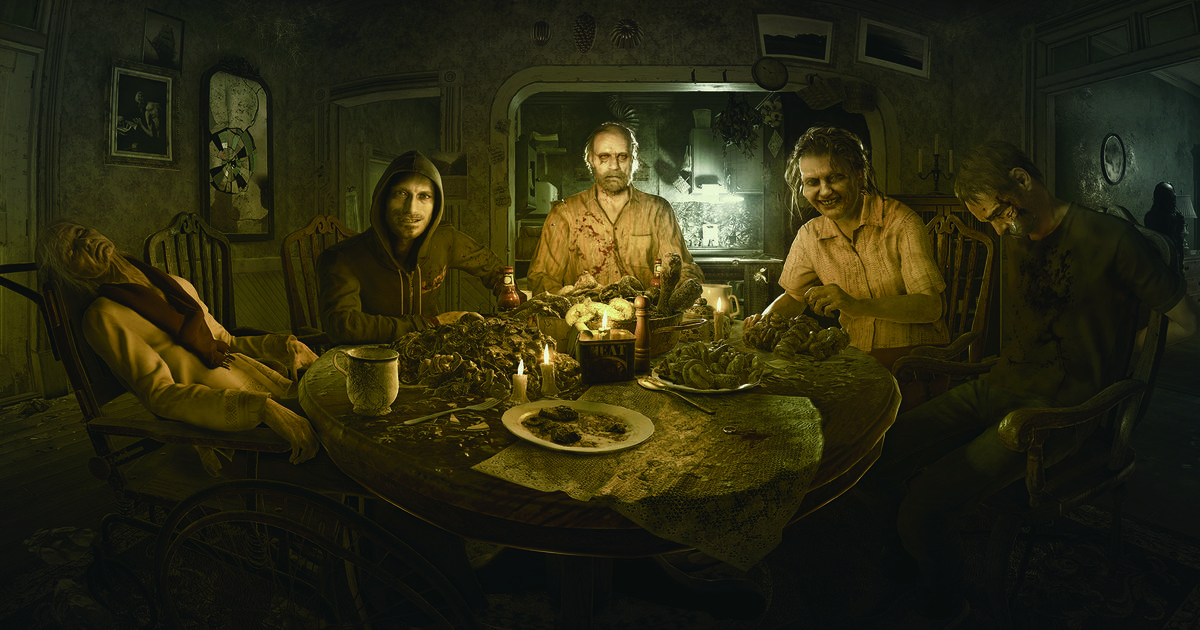 A definite return to form for the series, Resident Evil 7: Biohazard is, to me, the most atmospheric entry in the series and, free from many of the narrative constraints of the early games, manages to forge out an entirely new chapter in the Resident Evil universe whilst still paying homage to classic tropes and even characters.

The pace does slow down somewhat after the first pulse-pounding section but you never feel bored or at a loss as to where to go next. The difficulty of the puzzles are, in all honesty, pretty weak but there are a few secrets littered here and there for intrepid explorers to uncover; still, as a fan of the first trilogy in particular, a part of me laments the melon scratchers.

Overall though, Resident Evil 7 is an easy recommend for me and stands out at the forefront of immersive first person horror, proving itself to be far more than the P.T knock-off that the demo initially suggested. 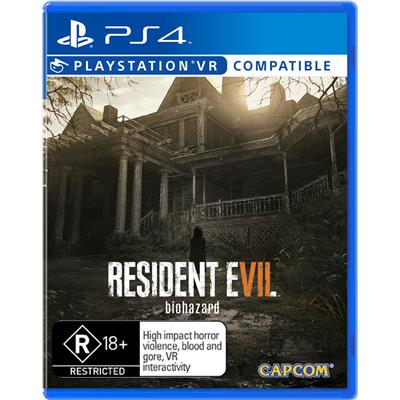