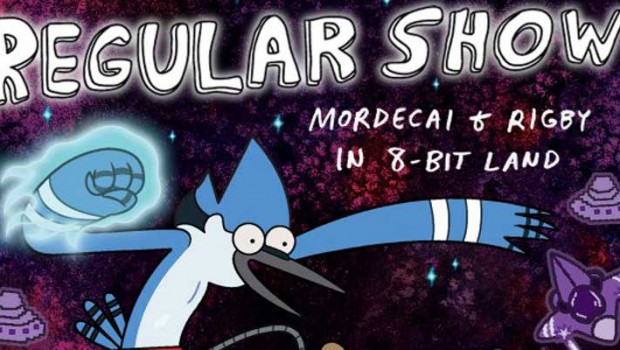 Summary: Decent platforming, unfortunately overshadowed by parts that want to make you rip your hair out. In a game with so many cheap ways of killing you, frustration plays a large part.

Summary:  Decent platforming, unfortunately overshadowed by parts that want to make you rip your hair out. In a game with so many cheap ways of killing you, frustration plays a large part.

As a modern gamer, it’s easy to forget how good you’ve got it sometimes. Today we take for granted things like auto-saving and in-game tutorials. But not too long ago, these things didn‘t exist. In their place, we had obtuse level design and crippling difficulty; almost impossible goals that could only be reached through religious dedication and hundreds upon hundreds of attempts- and a helping of luck didn‘t hurt. At the time, we didn’t care how many unfair, cheap or just plain random deaths we endured. We didn’t play them because they were great; we played them because they were games.

With their adaptation of the Cartoon Network’s The Regular Show for 3DS, WayForward are hoping to tap into some of that nostalgia. The goal was clearly to create as authentic an 8-bit experience as was possible, and for the most part they’ve succeeded in that aim. But is that such a good thing?

Fans of the cartoon first need to know that there’s no real story or plot. The opening cutscene is comprised of a few hand-drawn stills and some text, and then it’s straight into the game proper. There is no voice acting, so the quirkiness and humour of the show aren’t given much of a chance to shine through. 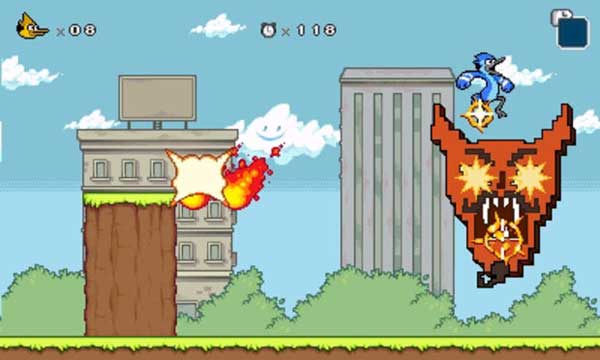 Players are able to switch control between Mordecai and Rigby at any time during the game, and each character has his own strengths and weaknesses. Mordecai can double-jump, which is handy for traversing levels filled with tricky jumping sections. Rigby lacks that ability, but he makes up for it by being able to squeeze through narrow tunnels or dash across closely-spaced ledges.

There are certain circumstances where you can activate your character-specific abilities, which also changes up the gameplay. When Mordecai comes across a starry background, for example, he can morph into a spaceship and shoot down enemies with a laser. Rigby’s ability changes the perspective to that of a top-down shooter.

Once the game has introduced you to all of these differing mechanics, it takes the logical next step and throws them all together. There are levels where you’ll have to double jump as Mordecai, quickly change to Rigby and then activate that character’s ability to avoid falling off the bottom of the map. As the levels become more and more complex, and you find yourself faced with multiple paths, it comes down to timing and lightning-quick reflexes. 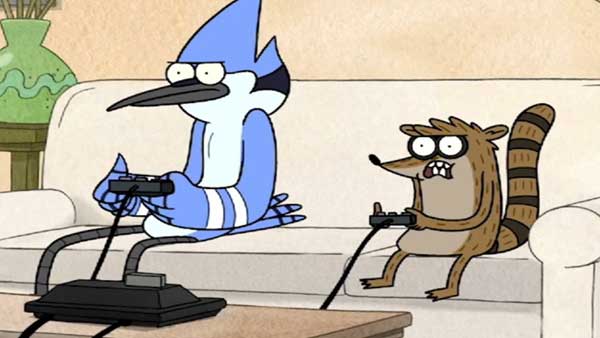 You can see that the developers have put some thought into these increasingly fiendish puzzles, but even so, the gameplay never really clicks into place the way it should. If you take any of the individual modes, they’re all serviceable rather than outstanding. Mordecai’s space fighter feels just a little too stiff to control, and Rigby’s top-down shoot-em-up is full of bland corridors, and enemies just standing around waiting to be shot. Whether you look at the sum of its parts or the whole, the game feels slightly underdone.

The levels are full of nooks and crannies to explore, but the game punishes this exploration with a brutally unforgiving checkpoint system. After a few cheap deaths, you’ll start to wonder if it’s really worth going after that piece of concept art or that extra cash to spend in minigames.

The most frustrating part of the game would have to be the boss encounters. As in most games, these uber-enemies have their characteristic attack patterns which need to be learned. But even having done this, you’ll often lose a life to what seems like a cheap or just unfair tactic. On some bosses the hitboxes are miniscule, meaning you’ll have to jump on the exact pixel that the developer intended… or die. Sometimes you’ll get it right and the game will still kill you, such was the case during a fight with a multi-headed goose robot ‘thing.’ After jumping on the last head and killing it, the game also killed me… and subsequently crashed. Platform gamers expect difficult boss fights, and it’s okay to demand expert timing and agility of them, but sometimes you’ll scrape through and feel as if luck played a bigger part than skill. 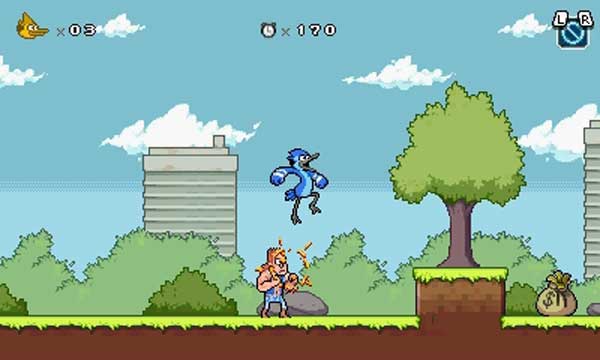 With its simple scrolling backgrounds and basic, colourful characters, 8-bit land has the look of a modern iOS or android platfomer- you know, the kind where Mario or Alex Kidd has been substituted for a Leprechaun or some other cutesy mascot. Somewhat strangely, the environments become less colourful and more dreary as you progress through the game. After clearing the first world, which is the park setting in which the characters work, you’re paraded through a list on nondescript locales such as caves, castles and construction sites- all of them painted in an uninspiring mix of grey and brown.

The 3D effects are implemented quite nicely, giving you a good distinction between foreground and background. But as with any other 3DS title, you have to keep your hands permanently still or risk having the picture slide out of focus.

The sound effects and music are suitably cheesy and repetitive, fitting the bill nicely.

WayForward have succeeded in bringing authentic gameplay from the 8-bit era onto a modern device. The only problem is, they’ve brought back everything: The good, the bad, and the hideously ugly. You can sense good intentions on the part of the developers here. The game was clearly made on a budget, which is nothing to be scorned (the show on which it’s based started from humble beginnings as well.) Beneath the frustrating elements, there’s a solid platformer that could have truly sung had it only been given a little more love and refinement. 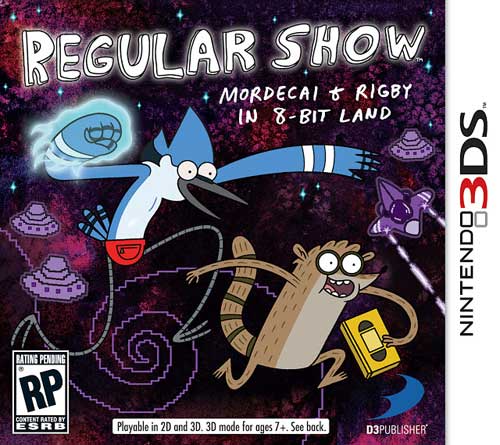