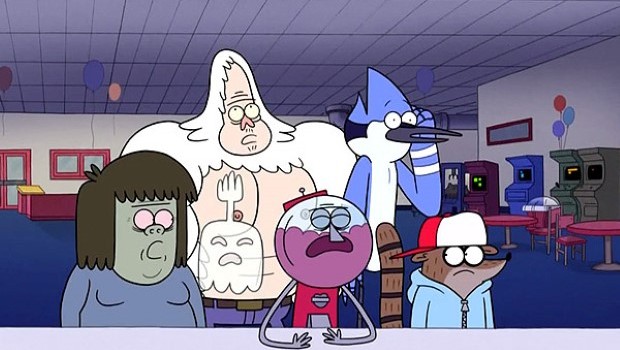 Summary: With this release collecting some of the best episodes of the series, you won’t find a better priced or more entertainment packed release than Regular Show: The Complete Third Season. 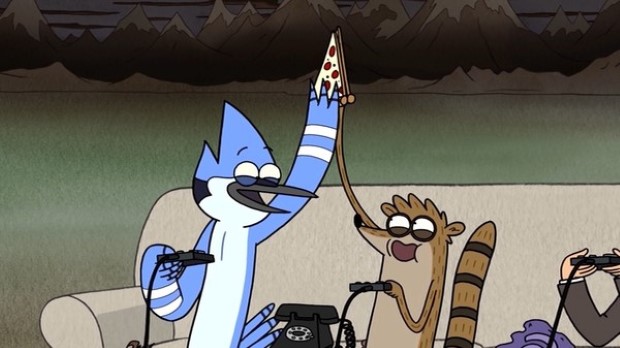 Ostensibly a children’s show, Regular Show’s blend of deadpan humour and pop culture references ensure that the series appeals to more than its apparent target demographic; indeed, some may argue that it is the older viewers who will find the most to enjoy from this unique and amusing series, with the humour throughout possessing a subversive streak without having to resort to vulgarity like many of the show’s contemporaries.

For the uninitiated, Regular Show follows the exploits of Mordecai the Blue Jay and Rigby the Racoon, your archetypical slacker buddies who’d much rather lounge around playing video games than actually tend to their groundskeeper positions at the local park, much to the chagrin of their boss Benson, a living gumball machine. 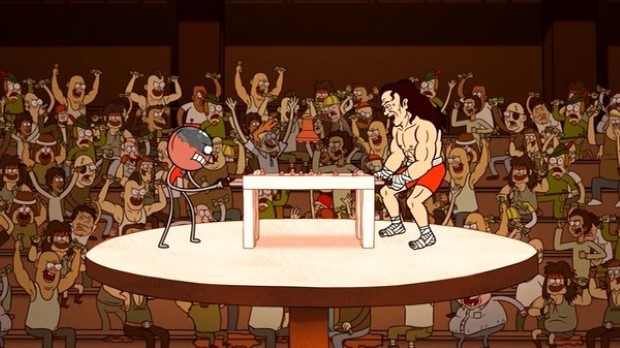 Most of the episodes revolve around the duo participating in some mundane task that quickly spirals out of control into the realm of the surreal – For instance, the simple act of Rigby legally changing his name to “Trash Boat” ends up altering the fabric of time and space itself when an irate washed up rocker named “The Urge” travels back in time to vanquish Trash Boat, the usurper of his title of “Guy with the coolest name in existence”.

Also working at the park are a motley crew of characters including a skipping yeti voiced by Mark Hamill, appropriately named Skips, a chubby green ghoul called Muscle Man who constantly cracks “My Mum…” jokes – Yep, not “Your Mum” jokes… It’s safe to say that Muscle Man doesn’t quite understand the structure of Mum jokes – A ghost with a hand atop his head and a lollipop headed old man with a heavy British accent who hails from Lolliland. 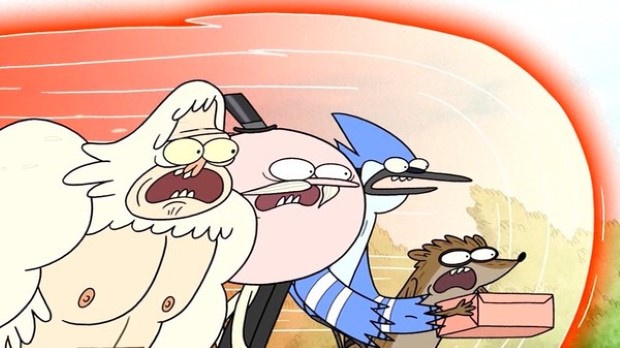 Throughout these forty episodes our workaphobic duo come to Pop’s defence and aid him in getting back at a group of freestyling rappers who mocked him, find themselves coming face to face with a demonic doll named Percy with a predilection for drawing on faces, take an unconscious Benson out on a date a la Weekend at Bernie’s before falling victim to a psychedelic freakout set to the rocking strains of “Mississippi Queen” and struggle to restore Rigby from the cursed state of being turned into a house.

Elsewhere Rigby enters an eating contest in order to win a trucker’s cap, the pair take Margaret and her friend out on a camping trip where they are hunted by a half Man/ half Deer, Mordecai and Rigby attempt to get their hands on a burger purported to be the best in the world and many, many more surreal asides. 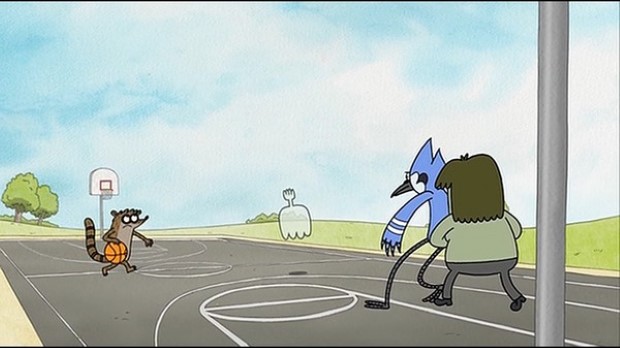 As always the storylines are bizarrely diverse and generally amusing throughout, although a few episodes fail to completely hit the mark; nonetheless, even these perceived misses generally work better than many of Regular Show’s contemporaries. The frenzied writing of the episodes riff on a multitude of pop cultural influences, from sci-fi classics, horror movie parodies, 80’s music anthems and more filtered through the prism of the show’s slacker mentality and hilariously realised upon the screen.

Madman’s transfer is, as always, impeccable, with the episodes spread out across three discs and showing no sign of compression or any other visual artifacts. The audio is clean and crisp, although some will most likely lament the lack of a 5.1 surround sound option, with only a 2.0 channel track available. 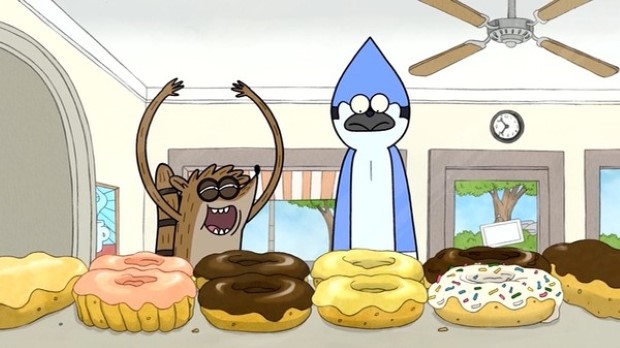 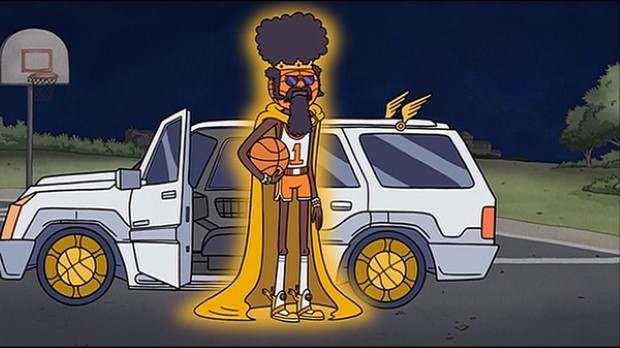 This release is actually rather light on supplemental features when compared to previous seasons, only offering commentaries on selected episodes rather than on all of them (Often some episodes from the season 2 release would even have more than one commentary per episode), a table read and a few brief featurettes that focus on the show’s creator J.G Quintel.

Although amusing enough, these featurettes don’t really shed any light on the production process of the show; the commentaries are interesting enough but tend to lean more towards general conversation between the participants rather than being heavy in technical detail. 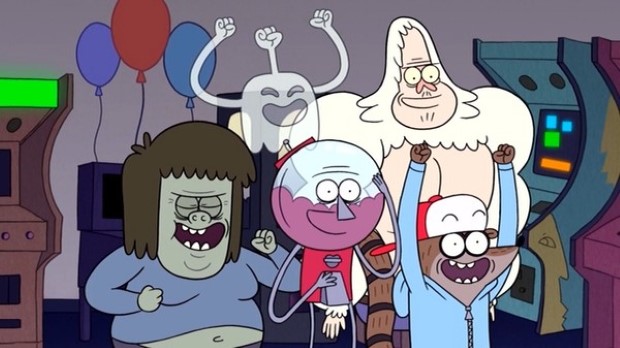 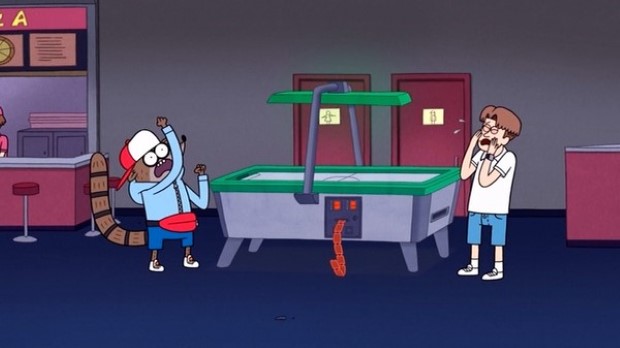 If you’ve not seen the series before then this release is probably not the best place to start, as there is a subtle thread of continuity throughout the episodes that occasionally call back to an episode from season one or two and the beginnings of Mordecai’s relationship with Margaret, which plays a much more prominent part in this collection of episodes, obviously started much earlier in the series.

Still, the episodes can be enjoyed on an individual basis as they’re generally pretty self contained and this release offers great value for money considering it contains forty episodes, especially when compared to the scattershot compilation releases Cartoon Network insists on commissioning for shows like this and Adventure Time.

Wonderfully surreal and packed with deadpan humour, Regular Show appeals to not only its target demographic of children but also those among us who enjoy intelligently scripted adult oriented animation, proving itself to be a truly cross-generational breakout hit. It’s hard to quantify exactly why Regular Show works as well as it does, especially when considering all of the disparate elements that comprise an ordinary episode, but work it does; with this release collecting some of the best episodes of the series, you won’t find a better priced or more entertainment packed release than Regular Show: The Complete Third Season.