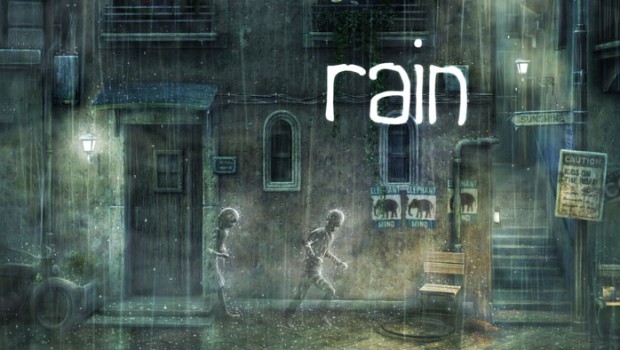 Summary: In the end, Rain is a beautifully crafted game on the PlayStation 3 which proves that sometimes less is more. It is well narrated and features some sturdy gameplay that I could happily recommend to all gamers who want something a little different. Given that, Rain is also an emotional experience that successfully draws the player into this dream like world of rain.

Developed by SCE Studios Japan and Acquire, Rain is reminiscent of those classic puzzle explorations titles such as ICO or Brothers: A Tale of Two Sons which really makes you think outside the square. Available via the PSN, Rain is beautifully presented on the PS3 and commences with this great water coloured painting inspired introduction about a nameless boy with a fever who witnesses an invisible girl being chased by strange scary creatures that appear to be out of a nightmare. The invisible girl can only be seen when the rain hits her body and when the boy goes to investigate, he discovers that he is also invisible and thus begins his adventure.

The world of Rain is like a story book come to life and this is made more so by the storytelling of the game with key sentences appearing in the gaming the world. The world of Rain also seems to be based in some psuedo fictitious European town such as Paris from its classic architecture. It’s quite a well designed gaming environment.

The first chapter of this 3+ hour game helps set the mysterious scene of this game as you attempt to find the girl. Unfortunately both you and the girl are being hunted by the unknown, strange nightmare like creatures who can only be seen in the rain as well. Thankfully most are quite stupid when it comes to finding you in the gaming world. 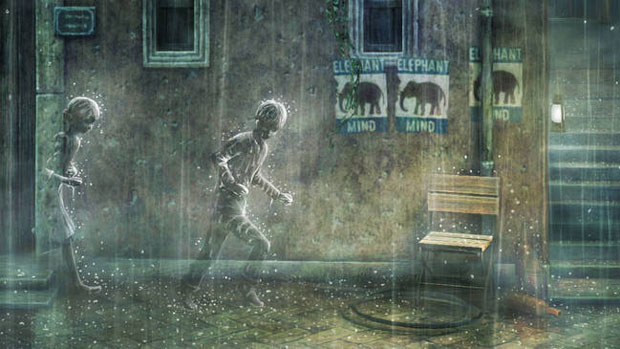 You soon discover that you can only use the environment to succeed with your objectives, including some clever use of stealth mechanics. If you get out of the rain, the unknowns cannot see you and this allows you to sneak around them. Another challenge to the gamer are areas that involve mud and if you walk through the mud, your footsteps will be seen in both wet and dry areas that makes your location known immediately. In order to bypass this, you need to find clear water to wash your feet. However sometimes you need to walk in the mud in order to explore the dry areas.

You can also interact with objects such as a gramaphone to play music in order to distract the larger unknowns. However when you do finally catch up with the nameless girl, she becomes your AI-controlled partner and you must work in conjunction to solve puzzles and other obstacles in your way. The relationship between the nameless boy and girl is also quite emotional and really helps with the storytelling.

Even though you don’t have any weapons in the game, you can sometimes use the environment to your advantage such as running towards a wooden scaffolding and then at the last minute, turning. This will force the unknowns to run into the scaffolding which then collapses on them and in turn kills them. Given that, the puzzles are not overtly difficult in Rain and should you become stuck, there is an in-built hint system made available to the player by pushing select. 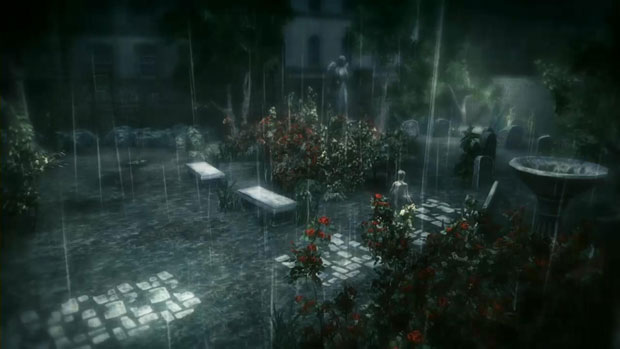 If you do die, the game boldly informs the player in blood red text that the children have been swallowed by the darkness. Thankfully when you do die, you are respawned to almost the last place where you died which makes the gameplay considerably more enjoyable than respawning you back at the start of the chapter. Needless to say, you will suffer many deaths from these strange creatures known as the unknown and the tension in the game can be quite epic, especially as the running stages. All in all, Rain is a truly enjoyable gaming experience on the PS3 that really gives the player a unique story and game.

The graphics of the game are quite captivating, especially the European architecture that makes the title feel like a Brothers Grimm title. Even though the camera is fixed, it does assist in pointing you in the right direction but the highlight of the graphics are the two characters themselves who can just be seen when the rain falls on their bodies. The unknown are quite frightfully designed and because you don’t have any weapons, it makes them even scarier. To compliment the graphics, there’s a wonderful piano accompaniment that matches the mood of the title and changes with each situation that you face. 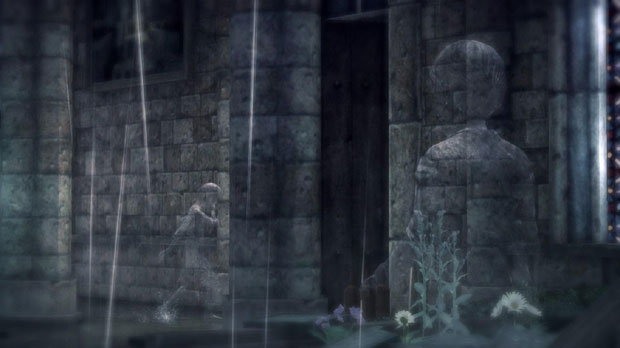 In the end, Rain is a beautifully crafted game on the PlayStation 3 which proves that sometimes less is more. It is well narrated and features some sturdy gameplay that I could happily recommend to all gamers who want something a little different. Given that, Rain is also an emotional experience that successfully draws the player into this dream like world of rain. Charming!