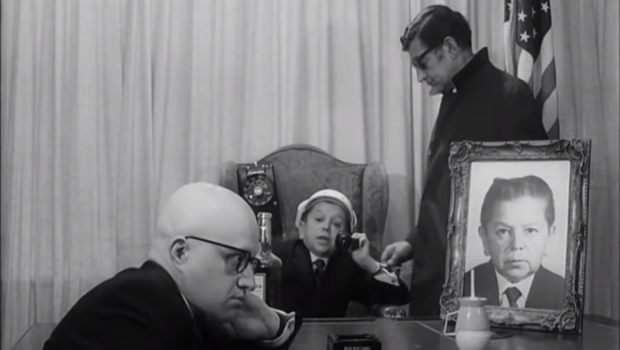 Summary: Putney Swope and the story of "Truth and Soul Inc." advertising agency, seems ripped from the headlines even though it is not.

Putney Swope (Arnold Johnson) accidently ends up the chairperson of a Madison Avenue advertising agency and decides not to work for war toys, alcohol or cigarette companies. All his accounts quit but the one he keeps is such a success they all come back begging to be bought on as clients. Even when he demands $1million cash up front and just the name of the product they love him and “Truth and Soul” advertising is born.

Even though the director believes the film is no longer relevant it seems like this movie could have made in the present day. The depiction of Pepi Hermine as POTUS is 100% accurate for now. Although the movie was made as a satire of the advertising industry (the director worked on experimental ads) it actually inspired people to work in that field.

I would disagree with the director there as alongside Easy Rider that it is a contemporary of and that movie was partially responsible for its’ success due to Jane Fonda mentioning it during a TV interview that led to more people seeing it.

The director also worked on the infamous Up the Academy which is embarrassed by. MAD Magazine famously disowned that movie also.

The line about the character wanting a raise is taken from real life and the director hoped if there was a remake it would show the behind the scenes of making the film. The main character’s lines were dubbed by the director as he kept forgetting them but they were so low budget he could not be replaced. Despite this the director liked him as an actor and kept him in the movie.

The bulk of the film is shot in black and white in the advertising agency with the ads being shown in colour. I had seen some of the ads before but not in the context of the entire movie. I only heard about this film a few years back when the (now defunct) the Cinefamily in Los Angeles was promoting their screening. I was pretty happy to be able to pick up the special edition when I was in the USA for a convention from the Vinegar Syndrome stand.

I enjoyed seeing Pepi Hermine playing President of the United States who also famously starred in Even Dwarves Started Small by Werner Herzog. The “let’s get together and shoot up!” line would have been strange even the 1960s.

A great running gag was with the photographer Mark Focus who kept talking down his rate to the point where he said he would do it for free “I can get anyone for free, take a walk!”

I would recommend this movie to anyone who even has a passing interest in marketing or the advertising industry or who likes satirical movies.