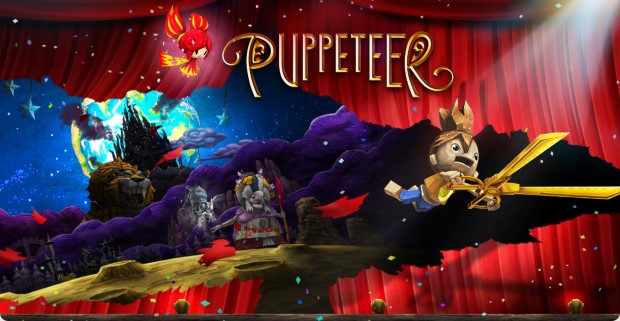 Summary: Impeccably designed and guided with a deft hand, this whimsical foray into a darkly humorous fairytale word is a joy to play and is an experience that can be shared by young and old alike.

This month has been dominated by Grand Theft Auto 5 to such an extent that it’s quite easy to forget that there are a few other titles that were brave enough to release under the shadow of the gaming behemoth. One of these titles that may have slipped under your radar is Puppeteer, an unassuming little platformer developed in-house by Sony’s Japanese studio; the release window was a risky chance for Sony to take but Puppeteer deserves to capture your attention just as much as this year’s big blockbuster game does.

Coming off like a twisted Tim Burton-esque fairytale, the story of Puppeteer follows Kutaro, a young boy from Earth who has had his soul stolen by the Moon Bear King and is carried away to Castle Grizzlestein where he is transformed into a puppet before being unceremoniously decapitated by The Moon Bear King’s hungry jaws.

Cast away to the lower levels of the castle, the now headless Kutaro runs into the Moon Witch Ezma Potts and her floating feline friend Yin-Yang, who offer to assist in restoring Kutaro’s devoured cranium if he’ll gather all of the moonstone shards possessed by the Moon Bear King and his generals and also a magical pair of shears called Calibrus. The Moon Bear King is apparently expanding his rule across the entire moon and plans to claim the souls of all of the children on Earth through controlling the dream world, but Ezma’s main motivation for wanting to overthrow the fuzzy tyrant lies more with financial interests. 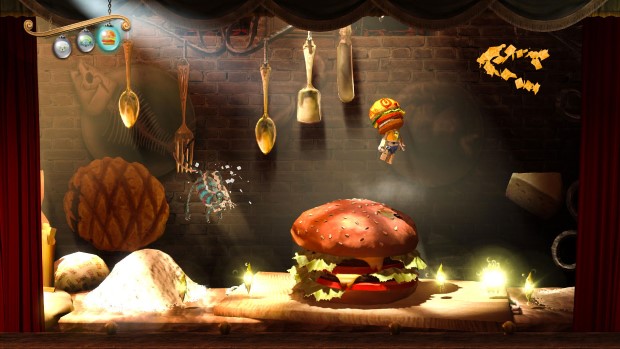 Kutaro sets out on a journey through the seven different kingdoms of the moon in order to reclaim his soul and his head, joined in his quest by Pikarina, a feisty little pixie who claims to be the Sun Princess, and encountering a colourful cast of zany characters along the way.

The first thing you’ll notice upon putting Puppeteer into your Ps3 is the sumptuous production design.  As implied by the name, the creative direction aspires to replicate the feel of an elaborate puppet show and the end result is truly a sight to behold. The game takes place on a single stage with constantly changing backdrops, framed by a curtain runner and stagelights; Kutaro’s movements, the animation perfectly resembling those of a marionette, are followed by a spotlight and illicit gasps of awe and applause from an unseen crowd. The characters appear to be hewn from real wood and the aesthetic of the sets closely resembles that of real, physical pieces, with waves that look like crepe paper, stars hanging from wires and visible sticks on the streamer-tailed squids. Each “act opens and closes with the raise and fall of a red curtain and there’s a hasty assembly of the scenery each time Kutaro progresses to the next screen. Puppeteer is completely committed to this aesthetic choice and is a refreshing a beautifully unique visual experience as a result.

The voice acting is deliciously theatrical, with an omniscient narrator serving to feed the audience plot exposition and describing Kutaro’s actions. The characters, aside from our mute protagonist, are all voiced with bombast and rarely come off as annoyingly over-the top and the music is delightfully twee and charming. 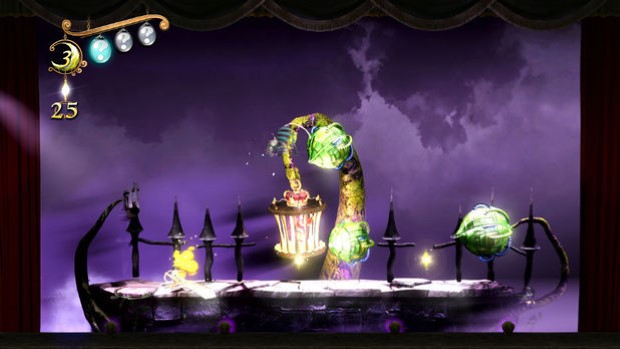 Gameplay is of the classic 2D side-scrolling platformer style that’s experienced a renaissance as of late, with the equally delightful Rayman Legends being the most recent comparison point. The left stick controls Kutaro’s movements whilst the right stick will move his companion around the screen; with a quick press of the R2 trigger on certain points of the scenery these companions can reveal a plethora of hidden objects, often small moon stone shards or new heads for Kutaro. Tis brings us to one of the game’s most unique aspects – The interchangeable head system. Because his own noggin was devoured by the Moon Bear King, Kutaro can wear a myriad of items as a substitute, each one with its own special ability in a mechanic reminiscent of the old Sega Mega Drive game Dynamite Headdy. These heads can be anything from a cheeseburger to a Christmas Tree and, if used in the right place, can open up hidden pathways to bonus levels and reveal treasure and roulette wheels. They also serve as a life gauge of sorts; Kutaro can carry up to three heads at a time and if he takes damage he’ll lose the one he’s currently wearing, being afforded a three second window to reclaim it before losing it for good – Lose all three and he loses a life.

Throughout his journey Kutaro will also unlock special abilities ranging from a hookshot,  a shield that can be used to deflect projectiles and beams of light, a Mexican wrestling bodyslam and the ability to throw and plant bombs. But the most useful ability opens up a whole new gameplay mechanic – Using Calibrus, the magical scissors. By wielding Calibrus players are afforded a unique way to traverse through the worlds by cutting through sections of the set and characters made of paper or fabric; by pressing square Players can whizz along seams, cut through obstacles and mini-bosses called Weavers and use the environments in creative and inventive ways, such as zipping vertically through a section by cutting through puffs of smoke or crossing vast expanses by snipping along a line of floating bubbles. 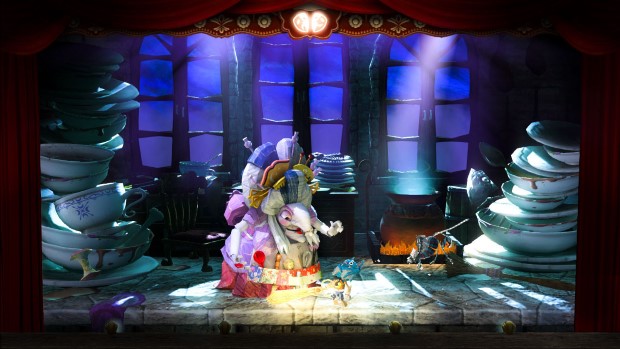 The levels in the game are comprised of your usual platformer fare, but with an inventive flourish – Worlds are your basic Snow, Desert and forest themed levels, with a Halloween and outer space world thrown in for good measure, yet the stages never come off as contrived or trite and you never feel the repetition of environments that plague other comparable titles. These worlds are also populated with some amusing characters like a love struck Pirate Captain, an existentialist Ghost, a world weary Dracula and more, really adding to the tone of the game. The Boss Battles are also handled incredibly well, ranging from smaller battles with the aforementioned cloth Weavers to the major skirmishes with the Moon Bear Kings generals. These hyperkinetic setpieces are visually arresting and often require quick reflexes as Kutaro dodges around the screen avoiding a series of attacks and waiting for the generals to reveal their weak spots before hacking away with Calibrus. Harking back to the golden era of 2D platformer boss encounters, these battles all feel exhilarating and intense, even the quick time event segments, and are sufficiently varied enough to make each one feel fresh and unique despite relying on similar mechanics.

The two player component where one player controls kutaro’s actions and the other controlling his companion is a welcome addition and the game also supports Move controllers and 3D for those so inclined. Puppeter’s only minor failing in my opinion is the rare occasion where the physics can feel a little floaty, leading to some frustrating moments when trying to complete a section requiring precision jumping; others may also find fault with the lengthy cinematics that open and close each act and the constant interruption of the narrator to be grating, but personally neither of these thing bothered me in the least – Indeed they just added to the charming puppet show aesthetic of the game. 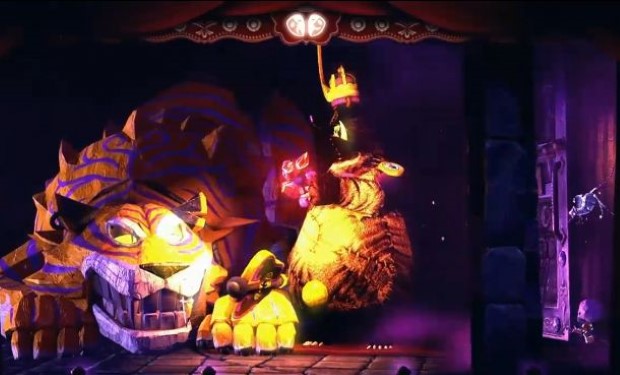 Whilst not an overly long experience – Most players will conquer the game in 7 to 10 hours – Puppeteer offers up great replay value through offering up a myriad of secrets to be found, whether they be completing your collection of heads or obtaining and mastering all of the bonus stages. The level design can be a little formulaic but each world is packed with so much charm and quirkiness that you’ll be willing to overlook this, and above all controlling Kutaro on his quest is just sheer unadulterated fun. Puppeteer is packed to the brim with personality and imaginative variations on the classic platforming formula and visually its splendour is unmatched. Usually the domain of Nintendo, Puppeteer manages to transport players back to a time where gaming was innocent and filled with wide-eyed wonder, recapturing the essence of youth in a time where the charts are dominated by first person shooters and crime simulators.

Impeccably designed and guided with a deft hand, this whimsical foray into a darkly humorous fairytale word is a joy to play and is an experience that can be shared by young and old alike. My two and a half year old daughter has never shown any interest in any of the games I play yet she was as enthralled by this as I was, constantly begging me to play it whenever I had the chance, and this, if anything,  is a true measure and testament to Puppeteers wide reaching appeal. When the budget price is taken into consideration, there’s really no reason why anyone who’s even the slightest fan of side-scrolling platformers shouldn’t go and pick themselves up a copy of this love letter to the genre. Highly recommended.