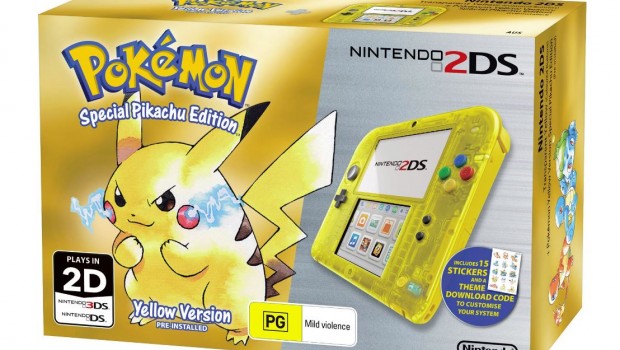 13th January, 2016 – Pokémon fans have a lot to be excited about in the early months of 2016! Nintendo today announced three new Pokémon-themed Nintendo 2DS Special Edition hardware bundles will launch in Australia and New Zealand on February 27, whilst the Wii U 3D versus fighting game Pokkén Tournament has been slated for a debut this autumn. In addition, two new sets of Pokémon-themed Cover Plates for New Nintendo 3DS also arrive in February, whilst a packaged version of Pokémon Rumble World and Pokémon Super Mystery Dungeon are launching on January 23 and February 20 respectively for Nintendo 3DS family of systems.

Meanwhile, fans who own a New Nintendo 3DS system can look forward to two new sets of Cover Plates – a Pokémon Super Mystery Dungeon set featuring artwork from the game on February 20 and another set decked out in artwork of classic Pokémon (SRP $AU24.95). The Nintendo 2DS Special Edition bundles and Pokémon themed Cover Plates, along with the Virtual Console releases in Nintendo eShop, will all be available from February 27, the same day that the original games first released in Japan in 1996.

Fans eager to control and unleash the power of their Pokémon in real time will be able to do just that this autumn, when 3D versus fighting game Pokkén Tournament launches for Wii U. With a cast of playable Pokémon including fan favourites such as Lucario and Blaziken, intuitive controls and an array of spectacular Pokémon special moves, Pokkén Tournament brings the rush of Pokémon battling into an entirely new genre of game.

Also arriving early this year is a packaged version of Pokémon Rumble World (SRP AU$49.95), set to launch in Australia and New Zealand on January 23 for Nintendo 3DS family systems. Originally released as a downloadable game on Nintendo eShop in April 2015, this packaged version will provide the full Pokémon Rumble World experience, alongside a number of features reconfigured especially for this packaged version of the game. On February 20, Pokémon Super Mystery Dungeon for Nintendo 3DS family systems will launch (SRP AU$59.95). This definitive Pokémon Mystery Dungeon adventure features 720 species of Pokémon, random dungeons filled with near-infinite challenges, and the chance to team up and battle alongside some of the series’ most iconic Legendary and Mythical Pokémon. Until March 17, those who purchase the game on Nintendo eShop will receive a download code* for a free theme for their Nintendo 3DS HOME Menu featuring Charizard, Pikachu, Bulbasaur and many more. This theme is also available for those who pre-order the retail version at select retailers**.